TOP COSMETOLOGY SCHOOL
Tennessee School of Beauty
This beauty school, located on Western Avenue, was founded as a family business in 1930 by Knoxvillian Jean Brown. It has been run by her great-great-grandson, Adam Brown, since 1987. The school, which became a Redken Premier School in 2012, was in the news earlier this month after they offered a free “Butch Jones Special” haircut to celebrate the Vols’ win over Florida. (H.B.)
Popular Picks: Tennessee College of Applied Technology – Knoxville, Visage Advanced Hair Academy 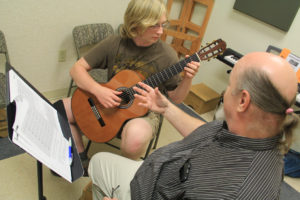 TOP MUSIC SCHOOL
Knoxville Academy of Music
Looking to learn how to play an instrument like guitar or piano or brush up on your music theory skills? The Knoxville Academy of Music, established in 2003, is one of the best options available in Knoxville. The school, which has 10 teaching studios, offers lessons for all ages and prides itself in having knowledgeable instructors, friendly staff members, and reasonable lesson prices. (H.B.)
Popular Picks: Joy of Music School, Open Chord

TOP RADIO PERSONALITY
Hallerin Hilton Hill (98.7 FM)
Triple H is a force to be reckoned with. His drive-time interview and call-in show on NewsTalk 98.7 has featured prominent Tennesseans like Gov. Bill Haslam and “newsmakers” like Rep. Martin Daniel (who indeed made news on the show itself, with an altercation that resulted in a misdemeanor assault charge). A slew of other projects—including a show on WBIR called Anything is Possible—keep him the most visible radio personality in Knoxville. (H.B.)
Popular Picks: Marc and Kim (102.1 FM), Benny Smith (90.3 FM)

TOP RADIO STATIO
WUTK 90.3 FM
WUTK ensures that the airwaves coming from Andy Holt tower on UT’s campus are always filled with diverse, alternative tunes. The radio station, which has been proudly playing “cutting edge” music since 1982, has been instrumental in giving students the chance to learn the ropes of radio and fledgling deejays the opportunity to share their unique musical tastes. With General Manager Benny Smith at the helm, WUTK has become a hub for great music and an effective training ground to boot. Just last week it was named the sixth best College Campus Radio Station in the country, according to ValueColleges.com. (H.B.)
Popular Picks: WDVX, WUOT

TOP SMALL COLLEGE OR UNIVERSITY
Pellissippi State Community College
Pellissippi State has grown tremendously since it graduated its first class of 45 students after being founded in 1974. Its four campuses in Knoxville and one in Blount County now enroll thousands each semester and provide students with a wide variety of career and certificate programs, from engineering technology to videography. The college was visited by President Obama in 2015 when he unveiled America’s College Promise program, making two years of community college free to students. Earlier this month, Pellissippi received a $1.9 million grant from the U.S. Department of Education to create a center for teaching excellence which will provide teacher training programs and opportunities for professional development. (H.B.)
Popular Picks: Carson-Newman, Maryville College

TOP TV PERSONALITY
Robin Wilhoit (WBIR)
Robin Wilhoit delivers the news with the steady and confident tone of a TV anchor you trust immediately. From her reporting on pill addiction in East Tennessee to her coverage of the Summer Olympics on the ground in Rio, the news anchor has become a long-trusted voice and admired figure in the Knoxville community. (H.B.)
Popular Picks: Abby Ham (WBIR), Todd Howell (WBIR)

TOP TV STATION
WBIR
The largest station in the region, founded in 1956, is known for its Emmy Award-winning Heartland Series and consistent coverage of local news, while keeping an eye to national issues. It boasts a roster of talented and recognizable anchors and reporters, like Robin Wilhoit, John Becker, Beth Haynes, and Russell Biven. And though he retired 16 years ago, legendary former co-anchor Bill Williams continues to contribute to the station in special projects. (H.B.)
Popular Picks: WATE, WVLT