About 75 years ago, author James Agee witnessed the arrival of cinema as an art form - The Knoxville Mercury 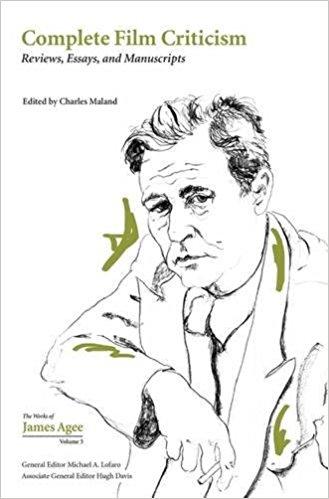 Last summer, a few weeks before the Mercury closed as a weekly print paper, I got a review copy of Chuck Maland‘s new UT Press collection of James Agee’s movie reviews. I enjoyed a summer afternoon with Maland, UT’s ranking scholar of cinema history, at his pleasant home, with an eye toward writing a feature profile of some sort. But fate sometimes plays Yahtzee with my career, and for the last several months I’ve found myself lacking a weekly newspaper and more preoccupied with asking people for money, trying to figure out spreadsheets, and coming up with things to say in front of skeptical audiences.

Maybe I can still write. I promised myself I’d get something out about Professor Maland’s book before Christmas, because although it’s over 1,000 pages long and looks serious and scholarly, it’s a fun read, this is gift-worthy for the serious Agee enthusiast on your list, and maybe even more for the old-movie fan. It’s an expensive book, maybe too expensive to buy for yourself, and I’ve heard people say they hope they get it for Christmas.

Born and mostly raised in Knoxville’s Fort Sanders neighborhood during the first quarter of the 20th century, James Agee is known to many as author of the landmark work of immersive journalism, Let Us Now Praise Famous Men (1940), considered a harbinger of the “new journalism” of Tom Wolfe and Hunter Thompson in the 1960s. He’s well known to many more as author of the autobiographical novel, A Death in the Family, published posthumously in 1957. America has shown homage to that story by producing and consuming a Broadway play and a total of four motion pictures based directly or indirectly on that book, from the 1963 theatrical release, All the Way Home, to the 2002 Masterpiece Theatre version that uses the title of the original book.

Death‘s prodigious cinematic afterlife is appropriate, considering that in his own short life—he died of a heart attack at 45—Agee was perhaps best known as a screenwriter (nominated for an Oscar for his treatment of The African Queen) and even more so as a film critic. He was considered one of the first literary journalists to take cinema seriously as an art form. That’s what this new book is about.

In our back-porch conversation last summer, I learned that Professor Maland and I have something in common. In college we both found used copies of a thick old paperback called Agee on Film, which included all of Agee’s known film criticism at the time. You wouldn’t think a collection of old reviews of old movies would be worth reading for years after the movies came and went. But, in fact, I kept this one handy, underlined and dogeared it, and referred to it so much the spine cracked in several places and it began to come apart. For the last 40-odd years, when I’ve watched an old movie I wanted to know instantly what Agee, a genius who died before I was born, thought about it. Sometimes I carried it around town; his often-hilarious quips about familiar movies and movie stars are quotable in pub crawls.

I probably won’t be carrying this one around town, unless I get a hand truck for it, but it’s more complete, and more accurate, than my beloved paperback.

Agee wrote for both Time and The Nation, different reviews for different audiences, often of the same movies. The shank of Agee’s career as a film critic was only six years, from 1942 to 1948. It would be hard to choose a better six years to write about. If you claimed that the art of the motion picture peaked in the 1940s, I would argue, but without much conviction. It was a pretty amazing six years in major motion pictures, among them Casablanca (Agee found it amusing in ways that may ruin that classic for you), The Naked City, Mildred Pierce, The Lost Weekend, Notorious, Treasure of the Sierra Madre (one of Agee’s all-time favorite movies), Key Largo, Isle of the Dead, The Curse of the Cat People (Agee liked those two as B movies that were better than most A movies), Guadalcanal Diary, A Tree Grows in Brooklyn, Red River, The Big Sleep, and Chaplin’s latter-day masterpiece, Monsieur Verdoux, which Agee championed even—or especially—as Chaplin was facing charges of Communist subversion. Maland remarks that Agee was supporting Chaplin as most of the cinema establishment was denouncing him.

Agee was also an early champion of talents that peaked after he first praised them, like directors John Huston and David Lean, as well as actors Gene Kelly, Elizabeth Taylor, and Janet Leigh (“deserves better roles”). It’s a little hard to grasp that Angela Lansbury, whom the 35-year-old Agee described 71 years ago in The Picture of Dorian Gray is the same Angela Lansbury who has a current television series and a movie scheduled for release in 2018. Some didn’t take the young round-faced beauty seriously, but in 1946 Agee wrote that she was “touching and exact in her defenseless romanticism and…evocative of English milkmaids in 18th-century pornographic prints.”

But Agee’s pans are the most fun to read. Of a 1945 Joan Fontaine movie, he wrote, “I would like to make The Affairs of Susan sound half as bad as it is, but I know when I’m licked.”

And here’s Agee’s famous one-sentence assessment of the 1947 John Wayne opus Tycoon: “Several tons of dynamite are set off in this movie; none of it under the right people.”

He described, a little sadly, what he saw as the artistic deterioration of a director named Clarence Brown, director of the odd movie The Human Comedy. Brown lived in Knoxville during Agee’s early youth. In his review, Agee acknowledged that he admired Brown’s groundbreaking early silents, and Garbo’s best movies, but added, “I have still to insist that he has become a dope.”

With more resources than the original editors of Agee on Film had, Maland did years of research and found many confirmed Agee reviews not included in the previous collection, topped with some cinema-related feature stories that stretch Agee’s era a bit. I’d never seen or heard of Agee’s lengthy review of Sunset Boulevard, published only in a British journal in late 1950. The movie awed Agee. He acknowledged that it was a harsh indictment of Hollywood, but that the mere fact that it could produce a movie like this meant that Hollywood was at least partly in great shape.

I thought I’d read everything Agee had ever published, but several of these were surprises to me, especially his insightful but standard Time magazine profiles of some movie stars like Ingrid Bergman and Greer Garson, and Hedda Hopper (who wrote “prose of an inspired spasticity.” That one includes a very brief, unindexed mention of Hopper’s son, William, who after Agee’s death would become known as Perry Mason’s detective Paul Drake.)

It’s almost chilling to see, in his 1948 Time story about the movie Hamlet, Agee express admiration for the British actress Jean Simmons, then still a teenager, who played Ophelia opposite Laurence Olivier. (“She has an oblique, individual beauty and a trained dancer’s continuous grace.”) Fifteen years later, long after Agee’s death, Simmons came to Knoxville during the production of All the Way Home, to portray Agee’s mother.

The book also includes about 60 pages of unpublished movie writing, including a few previously unknown capsule reviews of several movies of the mid-’30s, when Agee was in his mid-20s, including A Night at the Opera and It Happened One Night, and The 39 Steps. They captured his style more than half a decade before he started writing reviews for a living.

This weighty tome has fascinated me for the last several weeks, and I haven’t even finished it yet. I could write reviews of every one of these reviews. These weren’t intended to be read straight through—never mind three quarters or a century after the movies hit the first-run houses—but you might be tempted.

One new addition found by Maland is a lengthy, philosophical review of a perennial holiday favorite. It’s been claimed that It’s a Wonderful Life was a flop when it came out. That’s not exactly true, but it wasn’t a major hit, either, and in 1946 no one was suggesting that 70-plus years in the future people would be lining up to watch it in theaters. Agee liked it, sort of, but it sent him into a moral conundrum about good and evil and cause and effect, and he admitted he was tired of movies with cute angels.

Correction: A previous version of this column contained a typo mistakenly stating that Agee faced charges of subversion; it was actually Chaplin.