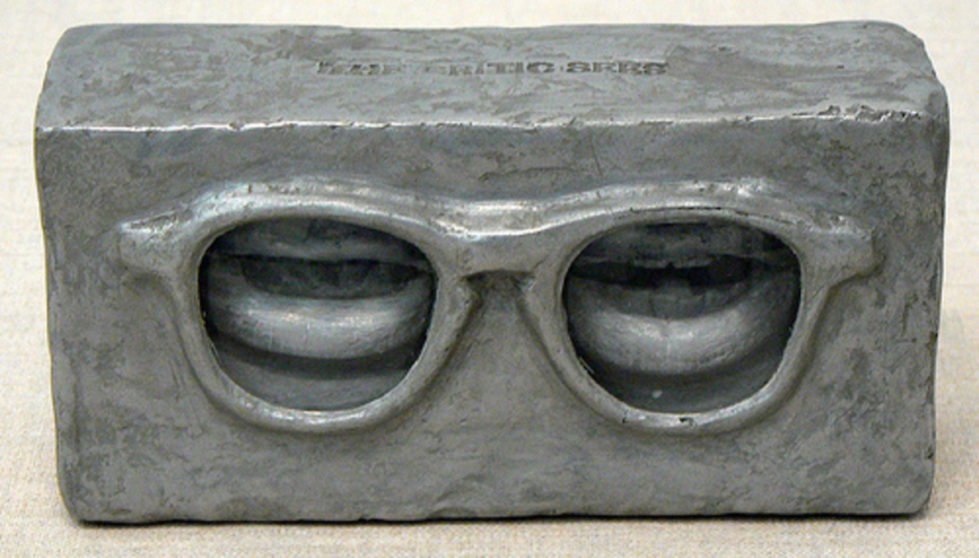 “The cities of America are inexpressibly tedious. …One can dine in New York, but not dwell there.”
—Oscar Wilde, “The American Invasion,” Court and Society Review (March 23, 1887)

“To look at the cross-section of any…big city is to look at something like the section of a fibrous tumor.”
—Frank Lloyd Wright, “Social and Economic Disease,” The Living City (1958)

“Our African-American communities are absolutely in the worst shape that they’ve ever been in before, ever, ever, ever. You take a look at the inner cities, you get no education, you get no jobs, you get shot walking down the street.”
—Candidate Donald Trump, campaign stop, September 2016

When invited by a former student to speak to an organization of construction professionals, I blanked on a topic for such a highly technical group. It was to be at their regularly scheduled lunchtime meeting; my student was in charge of arranging speakers. “You know,” he explained a bit incredulous, “do what you usually do. Think of something that drives you nuts and just talk about that.”

He was joking (mostly), but it made me think: It may not seem that way, but there’s a big difference between writing critically, and simply ranting, or ranting simply for that matter.

Ranting is what your uncle does at holiday dinners when someone mentions gun control, how many Russians can fit in a Trump Tower elevator, or passes on the turkey because they’re vegetarian. It is going on ad nauseam about how:

• Knoxville has laws in place requiring fully functioning lights on motor vehicles, yet drive for several hundred seconds in any direction and you’ll find at least one offending motorist;

• if the state’s “flagship university” continues to call its historically exceptional female athletes, The Lady Vols, then its habitually underperforming male sports teams ought to be known as The Gentlemen Vols;

• there’s a clear and present conspiracy behind the superabundance of “dealer” license plates in the Knoxville area, not to mention the preternatural number of pickup trucks. Especially white ones.

And these are only a sampling.

This column’s purpose, however, is not informed kvetching; it’s critical thinking about the built world we navigate every day. For most, of course, just getting through the day is accomplishment enough. Which is why columns such as this exist. Not to say that criticism is generally considered with greater fondness or respect than kvetching. For most, to be critical is little different than speaking poorly of the recently deceased. 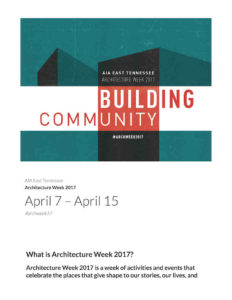 This sort of reticence pops up in places you’d least expect. Having taught drawing and design studios at several universities for over three decades, I marvel when colleagues on student reviews preface comments with: “I don’t mean to be critical, but…” Being critical, of course, is the point of reviewing the work in the first place. That’s why, in most schools, reviews are called “juries.” Telling a student that your comments ought not be confused with criticism would be a bit like a judge assuring the convicted to not take personally the court’s judgment.

While “the fault” of the convicted lies in themselves, “not in [their] stars,” for the designer, the fault is levied upon the work and by extension, one’s working method, not the worker. Moreover, criticism ought not be carping about what’s wrong; rather it should be an argument about how things might have been, or could be done better.

The East Tennessee American Institute of Architects has been asking how things around Knoxville could be better for a long time. Of late it has used its Architecture Week celebration to promote the symposium “What Makes a Livable City?”. I’ve moderated the event for the past two years.

This year’s symposium was at the Square Room off Market Square; it included several brief presentations by local luminaries such as Jack Neely, Marshall Stair, and an impromptu closing conversation I had with Knox Heritage’s Kim Trent. All of which caused me to reflect further on what we value in our urban centers, the names by which those values are known, and the differences among the best, most livable, and the greatest cities. 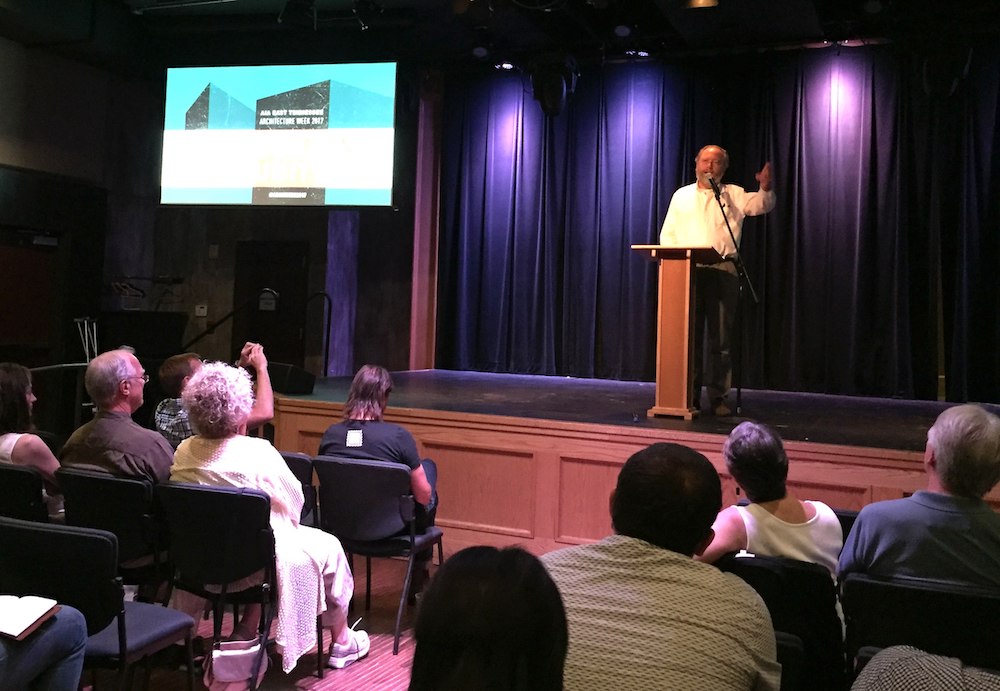 I soon uncovered a curious world of top-10 lists, shifting criterion, and fungible nomenclature. In the end, it’s what I chose to speak about with the lunching construction professionals, and what follows as the first of a three-part article.

The Problem with Cities

America has always had a fraught relationship with its cities. It may be one of several reasons that 19th-century westward expansion largely was privileged over the development and improvement of the founding colonies’ urban centers.

Alexis de Tocqueville found much to recommend in the Jacksonian democracy he observed during his nine-month state-sponsored tour chronicled in Democracy in America. A half century later, Oscar Wilde was not so amused. Wilde’s broadside against 19th-century urban America was prompted by the graceless wilderness he hacked his way through in Chicago, Baltimore, Philadelphia, New York, and Boston. His sentiment was not new, common among America’s literary elite and shared by many romantics of the mid-to-late 19th century. Thoreau, Emerson, and Longfellow, had joined the ranks of Jefferson, Monroe, and Adams before them in privileging agrarian over urban life. The former was cleaner, quieter, and closer to The Primitive Hut or Adams’ house in Paradise, the latter, a fetid melding pot of civilization’s ills. 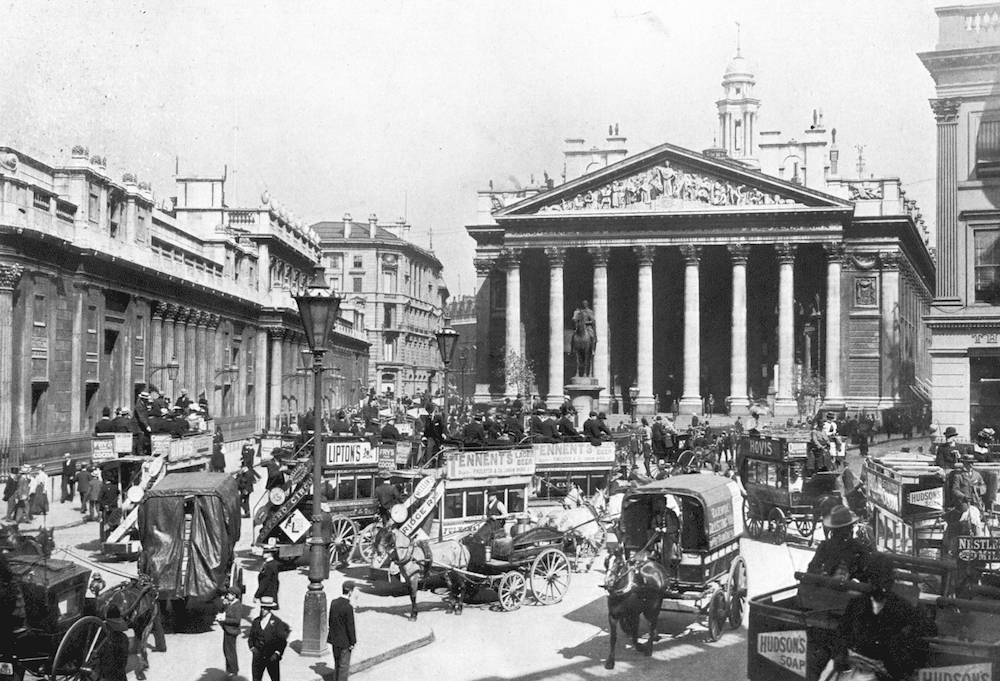 Royal Exchange, London, England, c. mid-19th century. The principle problem with cities, for the Romantics, was less the lack of civility, but the madding crowd.

For many of America’s leading thinkers, the problems with cities rested less in their buildings, streets, and omnibuses, and more in their multitudes. It’s largely for this reason that Thomas Jefferson famously advised the Trustees of East Tennessee College to build “an academical village, [rather than constructing] a large & common den of noise, of filth, & of fetid air,” as was the norm then. A single building would surely have all the problems of a city writ small. At the center of this village, Jefferson advised, ought to be an “open square of grass & trees, [that] would make [your college], what it should be in fact.” 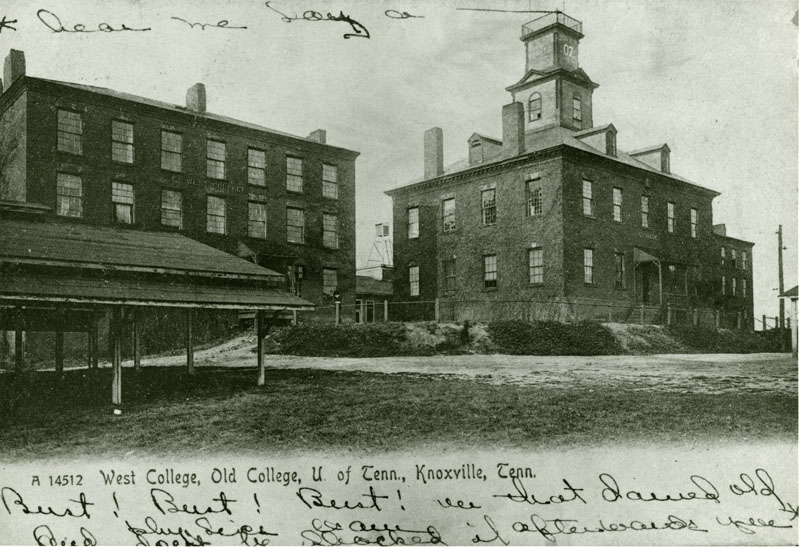 Once the college reopened as the University of Tennessee, its first order of business was getting to work building that large den of filth and fetid air atop Barbara Hill. Since then, the university’s uncanny propensity for building and demolishing all the wrong things in all the best places has become one of its longest and most cherished traditions. “The Rock” may soon be supplanted with The Wrecking Ball. 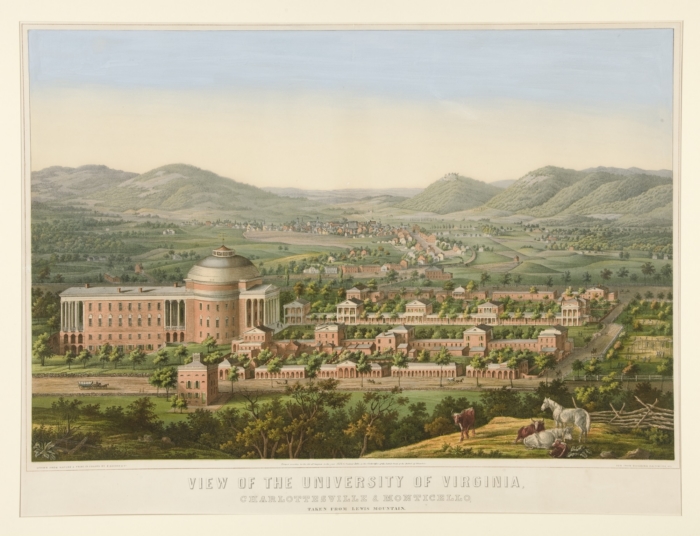 As for Jefferson, he chose as the site of his new university, neither a city nor even the center of the small town of Charlottesville. Rather, much like the University of Tennessee, he laid claim to farmland just beyond Charlottesville’s limits. Modeling his post-Enlightenment university after Jeremy Benthem’s panopticon (that promoted moral, spiritual, and physical health through isolation and surveillance), Jefferson first cloistered his academical village from the town, then segregated its buildings from each other. The Lawn, and the pavilions that flanked it, were surveilled from the Pantheon/panopticon-cum-library, perched on the site’s summit.

For the principle author of the Declaration of Independence and an inveterate correspondent, Jefferson published only a single book, Notes on the State of Virginia (1785), in which he laid bare his urban animus:

The mob of great cities add just so much to the support of pure government, as sores do to the strength of the human body. It is the manners and spirit of a people which preserve a republic in vigour. A degeneracy in these is a canker which soon eats to the heart of its laws and constitution.

Jefferson is nothing if not complex. Professor Paul Finkelman, on faculty at Albany Law School and the author of Slavery and the Founders, famously commented during a heated debate over a Jefferson biography published in 2012: “I think Thomas Jefferson is one of the most deeply creepy people in American history.” Yet, during the next two centuries, with the imprimatur of such anti-urban (and pro-slavery) luminaries as Jefferson, this sort of disquiet about the city became quintessentially American. Frank Lloyd Wright’s Guggenheim Museum, and his Fellowship’s decades-long development of the suburban utopia, Broadacre City, for example, are often cast as anti-urban anomalies in mid-20th-century architectural and urban studies. Yet, they are rightly part of this wider sea of America’s ambivalence towards cities, a tradition older than the U.S Constitution. 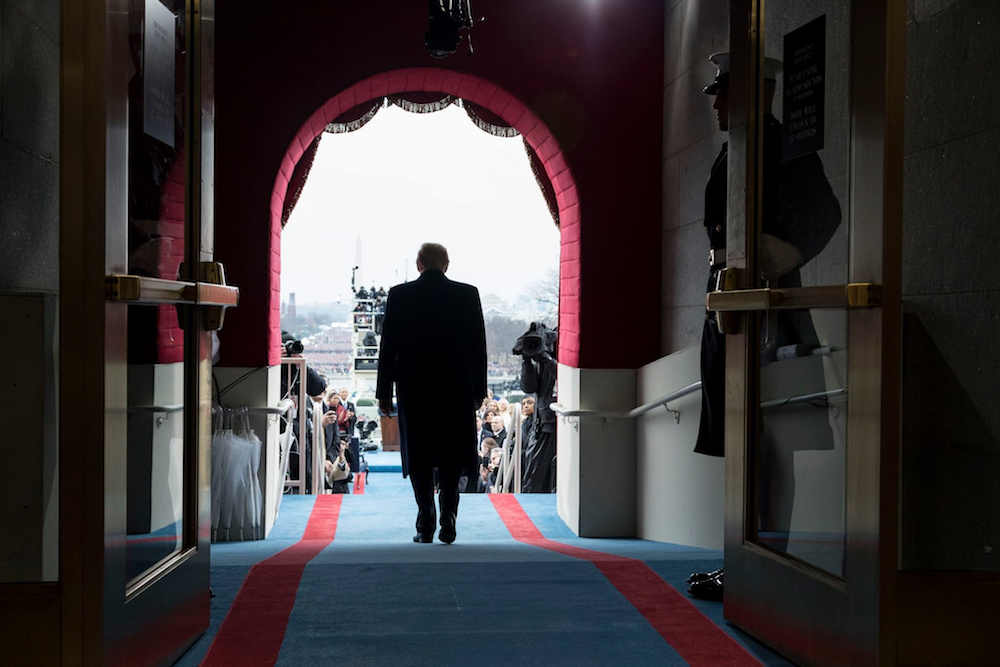 Donald J. Trump slouching towards his inauguration as the 45th President of the United States of America, January 20, 2017.

This long arc of disquiet notwithstanding, does anyone really believe our 45th president had either Jefferson or Thoreau in mind when he spoke during his inaugural address about the inexorable “carnage” ravaging our urban centers that he had come to Washington to stop, “right here and…right now”? Nor, I suspect, could anyone truly believe that candidate Trump spoke out of nothing more than a mentis ruina when he claimed on the campaign trail that urban-dwelling African Americans live in far worse circumstances today than “they’ve ever been in before. Ever. Ever. Ever.”—presumably including when they were chattel, purchased in public auctions, by owners with the right to beat, rape, and murder, at will. Ours is not a “perfect union,” but it’s surely “more perfect” than it was for Sally Hemings and her five little Jeffersons.

The monumental insult to America’s black citizens notwithstanding, this is what has become of “the city” in our political rhetoric. It is a straw man; the Willie Horton of political attack ads, the rhetorical Willy Loman of every Metropolitan Statistical Area. It’s no wonder that the average citizen has difficulty navigating the muddy waters of jingoistic taunts from ultra-right pyromaniacs, while urbanists and architects ceaselessly promote the civil, cultural, social, economic, and ecological merits of urban life and city building. 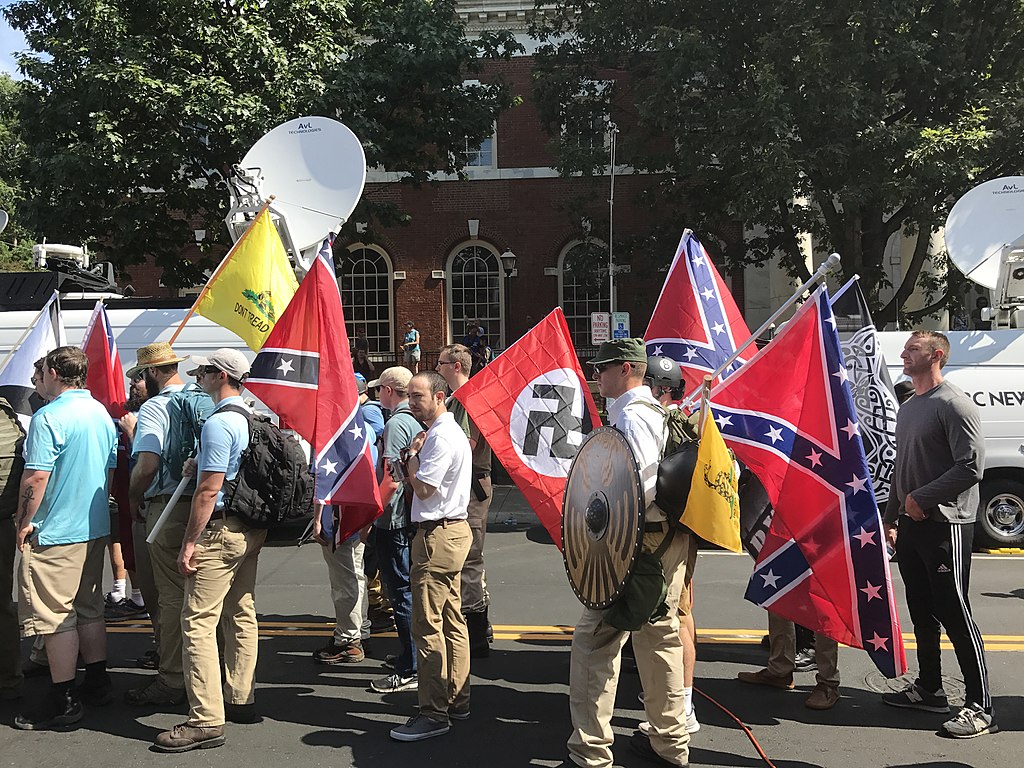