North Central is Knoxville’s coolest street. It’s changing rapidly, but with a crazy variety of far upscale and far downscale. The high-end tailors of John H. Daniel are hollering distance of second-hand shops and the old Freeze-O, where you can get a hot dog with chili or an ice-cream cone and eat it under a tree at a concrete picnic table. At some undetermined place on the spectrum are tattoo parlors, breweries, karaoke bars, organic groceries.

At the center of a community crisis this fall is an interesting old building on the 2200 block of North Central. Its broad holler is exactly two hollers beyond Happy Holler. A lot of us know it as the Rankin’s block. That fragrant breakfast and lunch diner has a solid claim on the title of Knoxville’s oldest restaurant. Its heritage goes back to the DeLuxe Waffle Shop, which Harry Regas opened around 1947. The Rankin family took it over in 1954. Either date would make it older than any other local restaurant I know of.

But it’s not Rankin’s of which we speak today. The building we’re talking about is just across the street from Rankin’s, and it’s older. There’s a proposal to tear it down.

That area’s been getting more and different traffic in recent months than it’s been accustomed to in the last 40 years or so. Go by Wild Love Bakehouse on a weekday morning when it seems safely too late for breakfast and safely too early for lunch, and you’ll find a big room full of people, many of them interesting to look at.

North Central has become both a refuge and an adventure to the hipster and to the more grizzled sort who misses downtown when downtown was edgy. For those of us who remember North Central’s post-industrial landscape as a destination for a drunken dare, it’s fascinating to behold, almost as if Maynardville were to evolve into Oz. But in some ways, it’s getting back to its roots. And this building is an example of what I mean.

The building in question is just a five-minute stroll past Wild Love and Mid-Mod Collective, but there’s a good chance you’ve never noticed it. We don’t always pay close attention to one-story blond-brick industrial buildings, and in this case the features that make its facade distinctive are crowded with overgrown hollies and weed bushes and vines. But if you slow down and look close, or better yet, get out of the car and look at it from the sidewalk, you see a telescoped entrance in an art-deco style with wind-tunnel curves and glass-brick illumination, the sort of design you saw when, say, Babe Ruth was alive, but not after.

A lot of folks remember it as the Habitat for Humanity thrift store, and there’s still signage to that effect. Before that, it was the Salvation Army. And before that, a long time ago but for many years, it was Charlie’s Pie Shop.

The name understates the operation. It was really an intimate pie and cake factory, whose products were, in the postwar years, successful and well-known in both groceries and restaurants all over town.

Born early in the century, Charlie Martin was originally from the Cumberland hamlet of Monteagle, and thought he’d make a living in the burgeoning bakery scene of Chattanooga, home of the Little Debbie and the Moon Pie. One company dared to open a Knoxville operation, and Charlie came with it. But the outreach ran into the Depression, and withdrew from Knoxville. By then, though, Charlie, an enthusiastic fisherman, liked Knoxville and found reasons to stay.

It was 1934. At a time when America needed more pies, Charlie started his own damn pie shop in a converted garage in Park City, on the east side of town, with just two employees, making 75 pies a day. That might seem like plenty to you and me, but Charlie had bigger plans. He expanded to larger places on Chestnut Street and then Houston Street. By the the time World War II broke out, Charlie’s had enough employees to field a respectable city-league softball team.

Charlie got a good deal of help from his wife, Elsie, who was, among many other things, the company accountant. Charlie’s motto was “Just Like Mother Used to Make.”

Meanwhile, in the 1920s and ’30s, by the way, North Central at Quincy Avenue was a broad, grassy space known as the North Central Show Grounds, used a few times a year for traveling circuses and tent revivals. In those days, Knoxville often hosted three or four circuses a year, including the big ones, like Ringling Brothers, John Robinson’s, and Cole Brothers. Knoxvillians rode out here with their kids on the Lincoln Park streetcar. In the ’30s, internationally famous lion-tamer Clyde Beatty himself was right here, in person, and so were some early Western film stars, from Tom Mix to Hoot Gibson, performing for crowds. Sometimes early country-music singers would perform out here, too, long before they were welcome in downtown auditoriums with cushioned chairs.

It was still the circus grounds when Dempster Brothers built its factory just back of the grassy part of Central, along the railroad track, manufacturing the very first Dumpsters the world had ever seen. Before Dempster, though, Central had been associated with bakeries. Merita had been on Central since the ’20s, and it wasn’t the first.

By the time of the war, North Central was changing. Some industrial development along the railroad crowded out the circus, which moved to the old air strip on Sutherland Avenue. Soon, on the 2200 block, Roscoe Sutton’s Friendly Tavern did business alongside Williams & Leslie’s Super Market. Americans were getting automobiles, and North Central was suddenly easier to get to. Even Sears, Roebuck was moving its main big store from downtown to North Central. It was fun to drive the DeSoto up and down and see it all.

In 1945, Charlie Martin built this building for his growing pie industry. I’m not sure who the architect was, but as factories go, it was an eye-catching place. Charlie was proud of the sleek, inviting building. It looked like maybe it was designed by an automobile designer. Charlie tended to use photos of it in his big display ads in the newspapers.

“It is with pardonable pride and grateful spirit that we give you this ultra-modern new bake shop,” said Charlie Martin in an ad published the month the war ended. “With our great country getting back to normal, and with added facilities, we pledge our honest effort in giving you the best pie it is possible for us to bake.”

With no call for modesty, he described the building in detail as “one of America’s finer exclusive pie bakeries. Planned for convenience, comfort of employees, sanitation, natural light and ventilation,” and equpped with “large modern mixers” and “huge ovens,” it was “a baker’s dream.”

When they moved into this moderne new building that summer, Charlie’s Pie Shop employed 22 and baked “thousands of pies daily.”

His panel trucks carried a warning on the back. “Bump Easy. I’m full of Charlie’s Delicious Pies.” Kids got a kick out of that.

One ad shows a specific version of the American Dream. A sharp-dressed young couple are out on a date at a restaurant, and a conveyor belt is conveying a seemingly limitless number of pies to their table. “Charlie’s Delicious Pies,” went the promise: “Everywhere you eat.” Restaurants carried them, groceries carried them, within a 100-mile radius of Knoxville. And they were all made right here.

It was the most famous part of a fun block, Charlie’s Pie Shop on one side, and the Deluxe Waffle Shop on the other, right next door to Jim Day’s Tavern.

Charlie made a big deal of his company’s 15th anniversary, on the week of Thanksgiving, 1949. He explained that his “idea” of the perfect pie became an “ideal” when he built this lovely factory. He was the Plato of Piemen. He made striving for the perfect pie sound like a patriotic achievement and an expression of freedom, one of the things we fought a war for. Supporters, including White Lily, signed a testament to Charlie’s Pie’s. “You have kept the faith, and today you have one of the finest Pie and Cake Shops in the South, strategically located here in Knoxville, a monument to your fine efforts.”

By the early 1950s, Charlie was employing 50, and producing 11,000 pies a day from this location. It was a postwar success, and became part of the story of Knoxville’s postwar expansion, and of the waning days of the era when factories were expected to be pretty.

In early 1953, though, just when everything was perfect, Charlie was feeling bad. He went to nearby St. Mary’s and, after mystifying some doctors, learned he advanced heart disease. After about three weeks in the hospital, at age 45, Charlie died.

His widow, Elsie, and his son, whose name was also Charlie, kept “Charlie’s Delicious Pies and Cakes” going at this same location for some years to come.

At some point, a southern wing, not as graceful as the original building, got added on. It matched the brick, but added nothing else in character with the design, and spoils the symmetry and makes the whole look more ordinary than it did in its early years.

In 1973, when national corporations were supplying cheap pies to groceries, the company finally yielded its agreeable factory space to the Salvation Army. Habitat took it over some years later.

I don’t know what it is about North Central and bakeries. You can’t run them away with a stick. Today there are several, most of them recent arrivals, and some of them run by people not old enough to remember Charlie’s: MagPie’s, Dale’s Fried Pies, Wild Love Bakehouse and, not far off the corridor, Maker’s Donuts, with more rumored on the way. North Central’s changing fast, and mostly for the tastier.

Charlie Martin’s once “ultra-modern” building is in the thick of it, and I bet any entrepreneur with a little imagination would be grateful to make good use of it. Lately, standards are higher on North Central, almost as if it’s a creative new zoning requirement. All additions need to be useful but handsome and distinctive and fun, like they were in Charlie’s day. 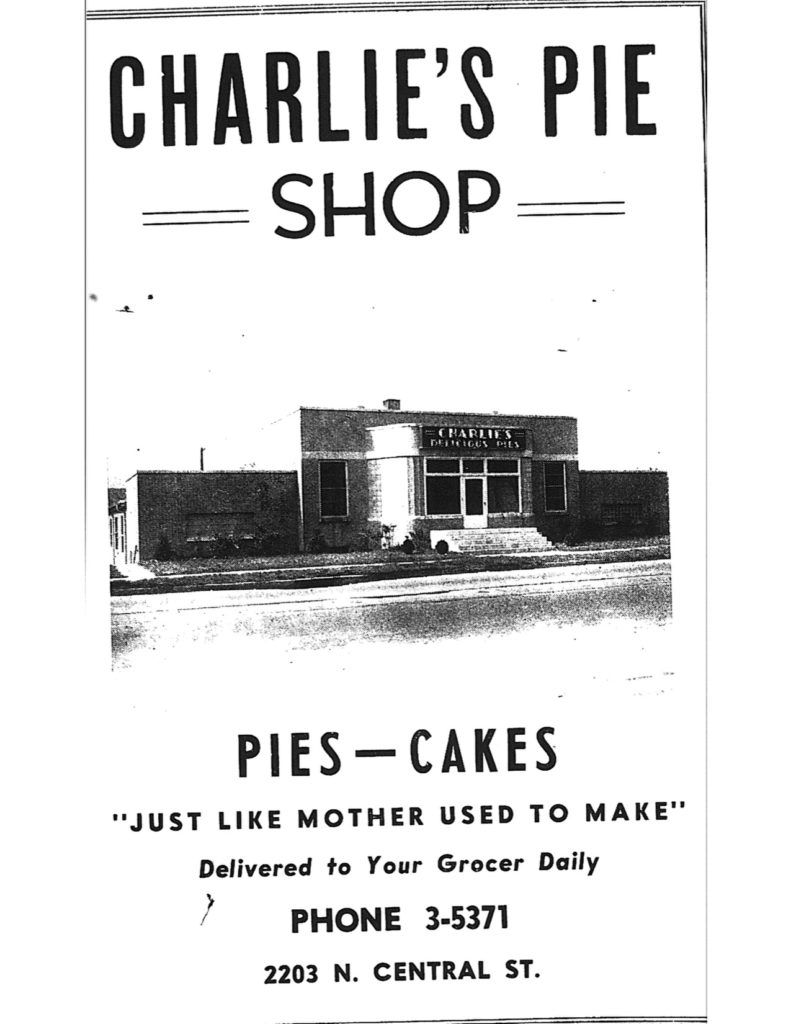 Courtesy of the McClung Collection

An ad for Charlie’s Pie Shop from the city directory.