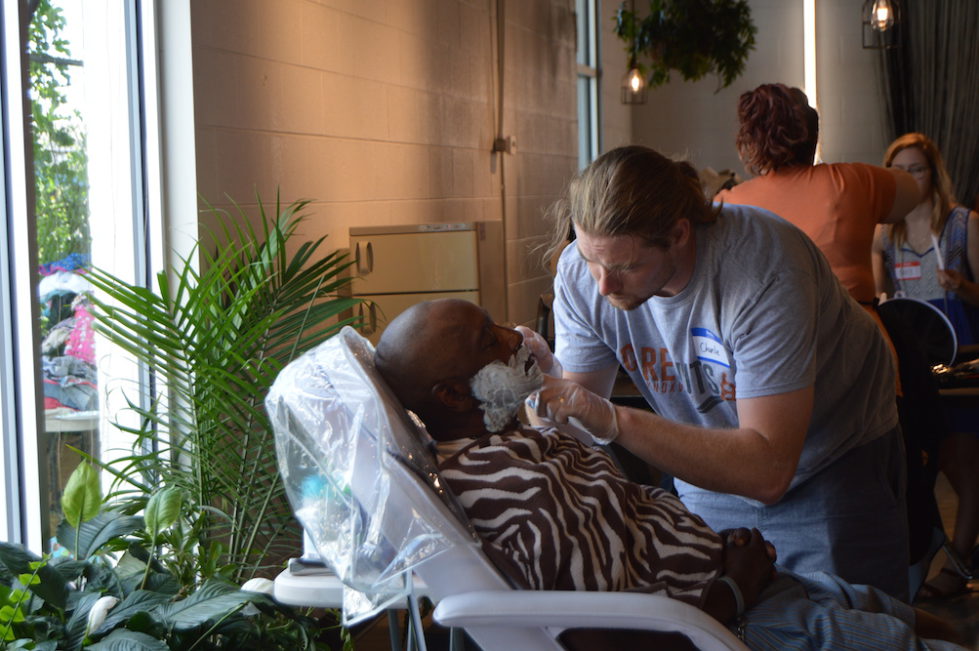 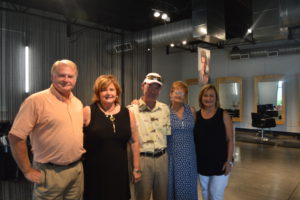 As a barber for 35 years and a volunteer at Lost Sheep Ministry,MartiBaker was touched by what she witnessed while volunteering, and she had a brainstorm: Why not combine these two missions? In April 2016, Baker decided she would cut the hair of the homeless for free—and she created a new organization to do just that. Since then, CareCuts of Knoxville has grown into a 501(c)(3) nonprofit that serves the Knoxville homeless community the first Sunday of every month. They now partner with other ministries on that day to provide food, clothing, and guidance.

Why is providing hair cuts to the homeless important?
Marti: Because it gives people their dignity back. It gives them a whole new look on life along with dignity and self-esteem. When I talk at schools, and places like that, trying to get volunteers, I say raise your hand if you’ve had a haircut, raise your hand if you’ve had a shampoo. I try to make their minds go back to “how does it make me feel?” It makes you feel wonderful. It makes you feel prideful. They come in with their shoulders drooped, and they walk out, standing up tall, smiling, cause they feel pretty or handsome.

How did this idea come to you?
Marti: Well, my passion in life is cutting hair. I’ve been a hairdresser and a barber for 35 years in Knoxville. And I had been volunteering for the Lost Sheep ministry under the bridge on Wednesdays. And, I had seen that there was a huge need for haircuts, shampooing, the whole nine yards.

Archie: I think the thing that really triggered her is one night, we were sitting on the couch, and Marti was talking about needing to do more and saying, ‘There’s got to be something I can do.” And then on the news, they showed a picture of a high-dollar stylist from New York City, on his day off, and I mean this is a guy that gets paid big bucks for one haircut. And he was out there cutting people’s hair on the street with a pair of clippers, no water, no nothing, just a quick touchup. What he was doing was helping them to be ready to get employment; to straighten them up, get them to feeling good. And Marti said, “Well you know what, I’m a barber, I could do that.”

Why does Knoxville need this?
Marti: The reason they need it is because a lot of people cannot go into the shelter and wait in line to get help. You’ve got people that we’ve helped like a Navy SEAL, who has PTSD and can’t be around crowds and loud noises. So, through CareCuts of Knoxville, we took the Navy SEAL and his wife to a motel for two weeks, let them get on their feet. They worked hard at getting to where they are today, and they now have housing.

How has CareCuts grown since its inception?
Marti: We started at Knoxville Institute of Hair Design. I’m a barber, I went back to my roots. And we were there for four months, and then the building sold. And we were homeless, wanting to cut the homeless’s hair. And then, through Facebook, Jeremy Wynn notified me he wanted to do CareCuts. And I said, “No, we can’t do CareCuts because we don’t have a place, but I’ll let you know.”
And he said “You don’t understand, I want you at my GEO Hair Lab.” And so, this is a whole different generation, Jeremy Wynn, and all these hairdressers, who’ve reached out to us. And what really tickles me is that when I’m done, they’re going to carry the torch on, because there will never be an end to homelessness I don’t think, but we also have people who need help, and that is why I’m so proud to be a part of this.

How has CareCuts influenced the lives of its clients?
Grossbard: I had almost nothing, no self-respect, lost all desire for life. And I was fortunate to meet Marti and Archie who they mentored me, got me back my self-respect, and brought me back to being a man.

Killingsworth: I was a widow. And I went into heart failure, and I could no longer work. I’d fallen through the cracks of every program until I was hungry one day, and it was cold outside, and a woman had had Marti’s phone number for years, and she called Mrs. Marti and asked her if she could help us out with some food. And she helped us out with food, and found somewhere for us to stay.
Now, I have my own apartment, furniture, and a place to call home. And it’s because of CareCuts. They taught me things I needed to know, and five months after I met Ms. Marti, I had a home.

Troutt: We people that are blessed and so fortunate, we see a panhandler, we see a homeless person, and we tend to think, “Ugh why don’t they go get a job? There’s people wanted for jobs everywhere, why don’t you do that? Get off the street!” … But then if you come over here and start talking to people one on one—sometimes there’s no addiction involved with these people, it was just circumstances of life, health circumstances, a child dying in your arms, losing your home, your spouse leaving, you’ve got no home, you’ve got no people. … What CareCuts is about is connecting one on one with people. One at a time. One person at a time. That’s it. And if we can continue to do that, and have it work, I hope we can do that for a long time.

What are CareCut’s goals for the future?
Marti: One thing in the works is that we’ve reached out to Cornerstone Peninsula, and we want to have drug recovery people out here in this parking lot along with the veterans. We’re reaching out to try and get rehab for these people. Because when they trust you, and they see you, they want to be more like you so they can heal.

• The first Sunday of every month, CareCuts offers support and services to Knoxville’s homeless community out of GEO Hair Lab in combination with various other ministries that offer clothing, food, and support.

• Volunteer. Whether you’re a barber or not, CareCuts is looking for volunteers for their monthly Sunday event to help enrich the lives of Knoxville’s homeless and help them get back on their feet.