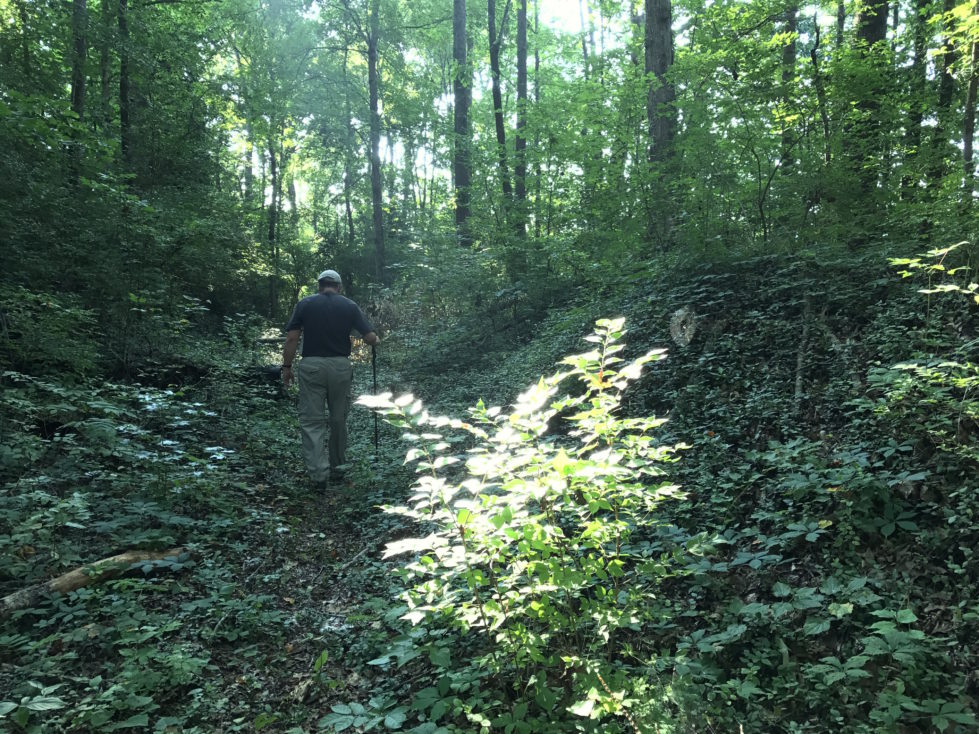 Winter creeper turns the old rail bed into a completely green tunnel, shielded from the blinding summer sun above. It’s so dark that even mid-morning, crickets sing a loud, high-pitched night song. Although the path is occasionally clear and wide, sometimes it flits so deeply among the trees that it’s tough to believe a big steam engine ever fit through here.

It’s been more than half a century since the Smoky Mountain Railroad carried freight from Vestal to Sevierville, but the Smoky Mountains Hiking Club is pushing for its old route to be cleared for a trail that would pass through scenic woods and neighborhoods of Knoxville.

The club had already surveyed the route for a rail-to-trail a concept that made regional attractions of trails like the Virginia Creeper and Atlanta’s Silver Comet since the 1990s. There is one key difference: The hiking club did its survey in 1967, predating the popularity of the rail-to-trail concept by decades.

Although the effort went nowhere then, the club has revived its campaign for the trail, which made little headway over the years largely because of ownership questions.

“We’re a little frustrated the city has had a difficult time deciding how to finalize the right of way legally,” says Tim Bigelow, treasurer of the Smoky Mountains Hiking Club and tireless volunteer on the trail during the last year. “They’ll have to make the effort of getting everyone to agree to it.”

Between the city greenways office and the hiking club, whose members are putting their own sweat and money into the project, the trail is slated to finally be built in the next two to three years through the city’s greenway expansion plan. (For more background and detail on that plan, refer to our 2015 cover story.) It is one of several rail/trail projects moving forward; another along the G&O railroad line will connect Chapman Highway near Kern’s Bakery with Ijams Nature Center.

“We consider this very much a part of the Urban Wilderness project,” says Tim Hester, Knoxville parks and greenways coordinator, adding that the Smoky Mountain Railroad trail “wasn’t even on our work plan six months ago.”

It’s on the short-term list partly because “it potentially serves a section of Knoxville with no greenway,” Hester says. “But it’s also an opportunity to link to the Vestal Greenway.”

The city’s priority is better linking existing parks and greenways. The portion of the Smoky Mountain Railroad greenway that it wants to build in the next few years would connect Charter Doyle and Gary Underwood parks. But the hiking club’s long-term vision is for almost 5 miles of trail along the old rail bed (including a spur to Mary Vestal Greenway).

Since the city is in the process of extending the Vestal Greenway half a mile to connect with Fort Dickerson Park, a trail network including the full Smoky Mountain Greenway could eventually take hikers and bikers all the way from downtown Knoxville to Seymour.

Members of the Smoky Mountains Hiking Club have cleared trees and vines from about a 1.5-mile footpath along the rail bed between Charter Doyle and Underwood park so they can invite the community on some easy hikes to check out the potential; the next one is scheduled for Aug. 20, 8 a.m., starting at Charter Doyle.

The path there isn’t easily visible as it winds a little above the soggy portion of the old rail bed. If you look closely among the creepers and trees, you can spot evenly spaced, mossy green bars – what’s left of the old railroad ties. The logs, once hardened with creosote, are now fluffy. The rails that ran between were mostly taken up years ago.

The path feels pleasantly isolated from the city as it winds through rustling trees toward Magazine Street, where the deep railroad cut dead-ends at a former underpass that the city filled in decades ago. (At least one neighbor remembers being warned not to play there as a child.)

Hikers rise to cross the street below Mooreland Heights Elementary School, then re-enter the woods through a curtain of ivy and vines. Shafts of light cut through the green canopy before the path passes backyards with pickup trucks, gardens, and outdoor stoves, the trail widening to open dirt where neighbors drive ATVs. It continues to pop up at streets before cloaking itself in green as it heads toward Gary Underwood Park.

Bigelow says the Smoky Mountains Hiking Club’s board has voted to help pay for fencing and bridges to replace lost trestles on the trail using a bequest from longtime member Charlie Klabunde, who died a few years ago. Klabunde was among the club members who took turns surveying sections of the rail bed from Vestal to Sevierville in 1967 at the request of a now-defunct state planning agency. The resulting report contemplated splitting the route at Shook’s Gap, with a bike trail following the rail bed and a hiking trail heading to the northern boundary of Great Smoky Mountains National Park.

When Klabunde walked the stretch closest to Vestal in 1967, most of the rails and switches were still intact and the hikers had to detour around rail cars backed into the weeds. His report describes cows grazing the tracks and neighbors’ vegetable gardens that had been extended to grow corn between the ties. “The blackberries were good all along,” the report noted.

The Smoky Mountain Railroad ran from about 1907 to the early 1960s. Some argue that after it shuttered, ownership reverted to the city, while others believe it’s owned by the landowners on either side, as it is in Sevier County.

“In Knox County, it did not revert to landowners, is our legal opinion,” says Carol Evans, executive director of the nonprofit Legacy Parks, which stands ready to help the city with the right-of-way process. “Several land owners disagree.”

Hester says the city is taking the approach that the landowners own the right of way (although large portions are identified as being the city’s on tax maps). He noted that the city could acquire enough land for the trail by only seeking easements to cross the land from owners on one side. But because of steep banks on the sides of the rail bed in some places, it probably wouldn’t.

“For two-thirds of the trail, you can’t see the houses,” Bigelow says. He says there are about 30 landowners along the first leg of the route. Michael Vaughn, a hiking club member who volunteers with the trail project, estimates as many as 100 owners line the entire railway in Knox County.

Bigelow says one vocal property owner strongly opposes the Smoky Mountain rail trail project, but others to whom he has spoken are supportive as long as a screen of trees remains between the trail and nearby properties. In addition to building bridges for the trail, the club has volunteered to erect fences along the back of residential properties where the owners are uncomfortable being close to a greenway. The old rail bed also intersects the property of the South Knoxville Church of God, whose pastors support trail development, Vaughn says.

Bigelow and Vaughn started clearing portions of the right-of-way about a year ago, armed with loppers, a saw, and a (manual) weed whacker. They’ve also hauled off at least five pickup truckloads of trash, Vaughn says, from old TVs to broken commodes. Even so, a hike Wednesday passed a bench-style car seat leaking stuffing, a shoe half-submerged in the ground, and fragments of a baby buggy or tricycle.

“Some of it was clearly a dumping spot for years,” Bigelow says. “There were 20 tires in one place.”

The city is already building another walking trail in Charter Doyle Park very close to the old rail bed. On Wednesday, city greenway workers were felling trees along the path with a small bulldozer and backhoe, then dodging the yellow jackets the work had accidentally stirred up. It’s unclear whether this trail would form a loop with the Smoky Mountain rail trail  – or provide another reason not to pursue the rail trail at all.

“Our position is the city should stick to the historic route,” Vaughn says, pointing out a place where a siding led to a black powder storage area. The powder was used in quarrying stone later used in Douglas Dam, he says.

The hiking club has contacted all the City Council candidates in the First District to tell them about the project, Vaughn says. Candidate Stephanie Welch asked to hike part of the old railway bed with Vaughn on a recent weekend. She says it’s a project she’d like to help advance if she wins the seat.

“It’s such a great fit with the outdoor culture and outdoor movement that’s happening in South Knoxville,” says Welch, whose campaign emphasizes her own enjoyment of hiking and biking in the Urban Wilderness that runs through her district.

“But what’s different about it is that it could not only be a hiking and biking route, but a transportation route,” she says. “I hear a lot from residents of South Knoxville wanting to be able to get around without a car.”

Evans says the railroad bed is an opportunity to create a flatter trail than many of those in the Urban Wilderness, potentially luring new users like elderly neighbors or moms with strollers that might not use more rugged trails.

“We love opportunities to introduce people to getting out onto beginner, neighbor-hood connected trails,” Evans says.