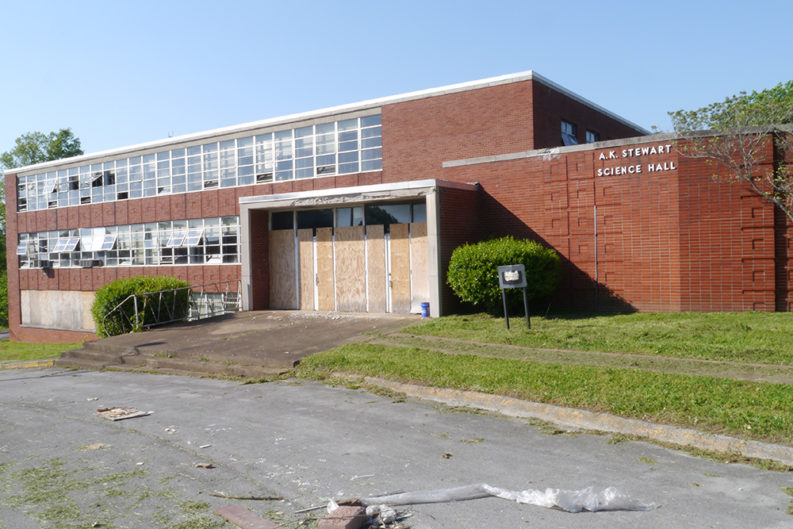 Knoxville College is off the hook: The Tennessee Department of Environment and Conservation decided not to list its science building as one of the state’s most polluted properties.

The state agency had a public hearing more than a year ago gathering feedback about the proposal because of concerns about ongoing contamination at the A.K. Stewart Science Building, which – like most campus buildings – had basically been abandoned. Designation as a state Superfund site (officially called the Inactive Hazardous Substance Sites List) is a step the state takes before paying for additional pollution testing and pursuing responsible parties for cleanup costs.

The building had already been the subject of an emergency cleanup by the federal Environmental Protection Agency in 2014, when it was discovered to still contained many highly-reactive chemicals even as trespassers roamed the open building in search of items to steal. One of TDEC’s biggest stated concerns was that the remaining college staff was not securing the building from vagrants, some of whom had set fires in other college buildings.

The historically-black college founded in 1875 was in debt and unable to care for its campus when it stopped holding classes in 2015. But it maintained a board and a skeleton, largely-volunteer staff as it pursued the possibility of selling a large portion of the campus for redevelopment in an effort to raise the money to offer classes again, most likely online. Knoxville College officials had said the Superfund designation would make this harder.

“TDEC does not plan to add the A. K. Stewart Science Building to the Inactive Hazardous Substance Sites list,” writes TDEC’s Kim Schofinski in an email.  “We agree with EPA’s recommendation that, before the building be reused, the school should hire a professional contractor capable of remediating mercury, have the building cleaned to indoor air standards, and that air samples be collected to confirm the building meets those standards.”

Although TDEC officials had speculated last year about whether soil testing might also be necessary to determine if some chemical waste from the building had been dumped down drains or on the ground, that has not occurred and isn’t being required.

In explaining the decision, Schofinski says that EPA conducted additional tests last summer that found levels of airborne mercury inside the building had dropped. Until the public hearing, TDEC had also not heard back from Knoxville College leaders. The agency learned only then that the college was deciding whether to reopen or sell part of the property.

“Our primary concern is that the college keeps the building secure,” Schofinski wrote in an email Wednesday. “Staff in our Knoxville field office visited the site today and verified that the building is currently properly secured.”

She added that TDEC has received no additional documents from Knoxville College officials and has identified no other responsible parties. At the hearing, there was discussion about whether a chemical supplier or building management/janitorial company might also bear partial responsibility, although none were identified.