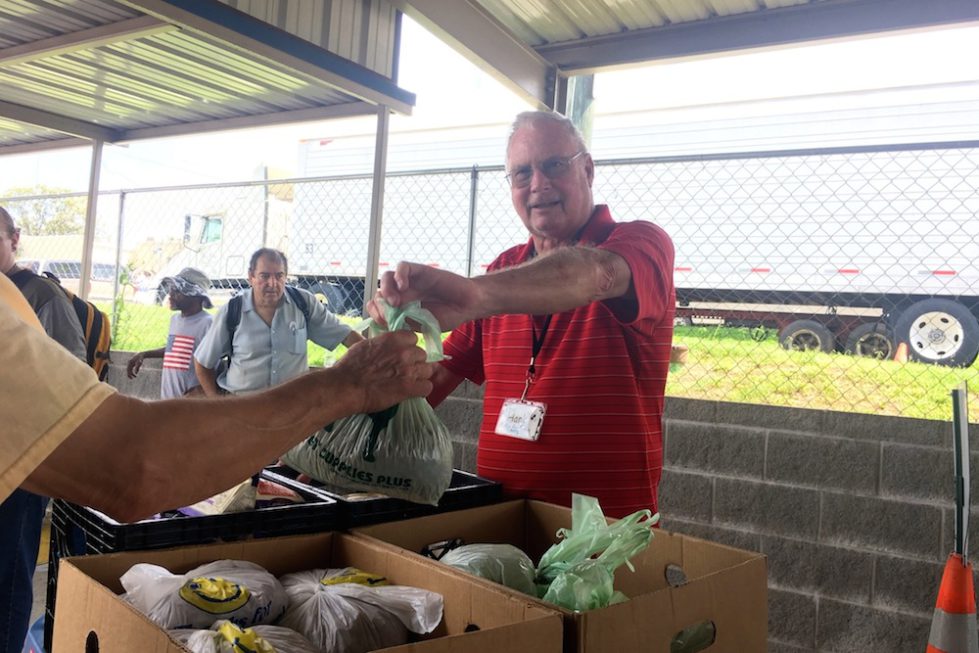 For the past 25 years, Ted Hembree has been volunteering at the FISH food pantry. FISH has grown from feeding 20 families a week in 1986 to currently serving 8,000 a month from its base at West Scott Avenue. And as FISH has grown, so have the needs of the community—if people can’t afford to feed themselves, what about their pets? In March 2009, a FISH director asked Hembree if he’d like to do something about it. Thus, the Pantry for Feeding Pets was born.

Every Thursday from 10 to 12 p.m., Hembree and his volunteers are at FISH food pantry to give pet food to the community. Before people arrive, Hembree and his volunteers are busy at work transferring pet food they’ve received into 4-pound plastic bags for easy and widespread distribution. They normally have four bins: one for dog food, one for cat food, one for wet cat food, and one for wet dog food and treats. And every Thursday, they give out close to 200 bags of pet food.

Why is this issue important to you?
It’s the animals. They don’t need to be eating human food. We can’t eliminate that, but we can make a small dent in it, and what goes on in our communities by providing pet food, so that the animals and the people can get food here at FISH and other pantries and sources throughout Knox and Blount counties.

There’s another element though, besides just the hunger issue. And that is the companionship between animals and their human owners. In many cases, people have no real companionship other than their animal or animals, whatever the case may be. If it gets bad enough, due to food needs or medical needs, sometimes people have to get rid of their animals when they don’t want to. Now, I think most of the people find them a home, a few abandon them at a shelter, and hopefully they find a home before they’re euthanized, but once they get to a point where they can’t handle the needs of the animal, then it’s pretty much a lost cause, and helping eliminate the food need is what we’re trying to do. We can’t go much further than that, as far as adoptions or finding homes, or veterinary bills, we’re not equipped to do that, whatever monetary donations we receive goes towards buying pet food and the needs of this operation.

How has the organization grown in the past eight years?
I’m not trying to grow, but it grew; last calendar year it grew until its peak with the other avenues of distribution that came into being with us. It was our biggest volume year too, with about 180,000 pounds of food we handled. That translates into a little over 45,000 bags. And we have found that for various reasons the supply of food and monetary donations has dropped a little bit this calendar year.

We also have assisted Mobile Meals here in Knox County when they need us, but we don’t provide for the entire Knox County. But there are some separate volunteers who have taken it upon themselves to handle that and so we furnish those people with pet food through the Meals on Wheels organization for delivery.

And since April of two years ago, we’ve been supplying case managers with the district attorney’s office with pet food to deliver to their companions that are veterans that need financial assistance.

Last year, we were responsible for about 45,000 of those 4-pound bags being distributed throughout Blount and Knox County. We currently have these three FISH pantries, one church pantry, the veterans, and Mobile Meals in Knoxville.

And we have blue barrels everywhere. They’re made in miniature versions of the barrels used for Missions of Hope at Christmas time. I have about 20 of those around town, with our logo on it for people to drop in pet food if they so desire. Many of them are at locally owned pet food stores, like Pet Supplies Plus, and AgriFeed, which are two of our biggest pet supply donors. And they all have barrels in all their locations in Knoxville and Maryville.

Almost every veterinarian from UT west to the county line have blue barrels, and a few others. Even Lost and Found Records has a blue barrel. It started out one year that they had raised so much food one week that they had to figure out who to give it to and they called me and it was all I could do to get it in a good-sized SUV. And then I went from there.

We even get a lot of folks who send $10-20 a month on PayPal. Several have it set up where it’s automatic so they don’t have to think about it. If they have to think about it, they forget, and it becomes a thing of the past. But those people that have been donating on PayPal have been doing it for years. And every so often I dump that money into the checking account to buy food. But we can always use volunteers to help us.

What are your plans for the future?
As a short-term goal, I’d like to increase the size of the bags from 4 to 6 pounds.

But as far as long-term, we are working to eliminate the need for pet food, and it’s unclear if that will happen, but if what we’re doing can help people feel self-sufficient and care for their companions, we want to continue doing it.

Do you have any pets of your own?
I have three, I have a dog and two cats. The dog is an American Eskimo Papillion mix named Wendy, and the cats are Gracie and Herbie.

• Providing pet food to families in need in Knoxville and Blount counties via FISH Food Pantries and other avenues.

• Donate to Pantry for Feeding Pets on their website.
• Volunteers are needed for help with food distribution, fundraisers, and social media assistance.