'The Great American Eclipse' is coming—why are we so excited? - The Knoxville Mercury 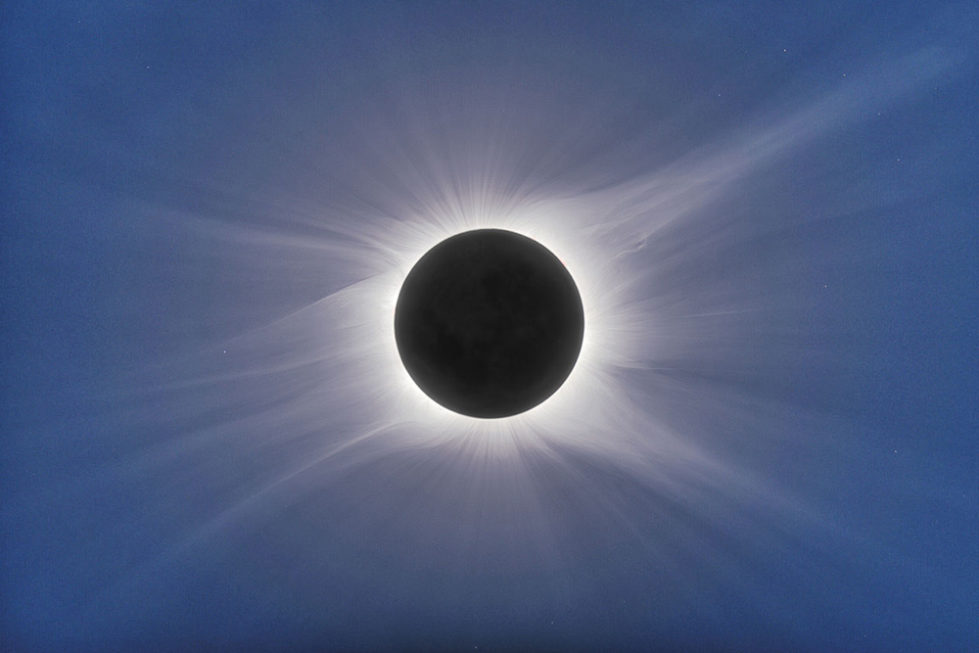 The day the world came to an end began just like any other: with a sunrise. Nothing exceptional, as far as we know. But it got the job done, and it got Florence Andsager out of bed.

She probably wasn’t impressed. Daybreak over the Kansas prairie meant little except the start of another day: technically new, but functionally unremarkable. Her daily routine, unquestioned, asserted itself. Florence’s father set out for the fields. Her mother attended to the usual preponderance of household chores. Florence and her siblings played outside beneath the blazing June sun.

Then, something unexpected happened. The night returned.

Far ahead of the its customary evening disappearance beneath the horizon, the sun’s peak summer brightness began to fade. A vast, round object blacker than night itself had appeared in the sky, and seemed intent on conquering the heavenly expanse for itself. Routine evaporated in an instant. Florence’s father came running. Her mother dropped what she was doing and hurried the children inside.

As the family embraced each other, terrified, the agent of the night prevailed. Save for some intermittent flickering along its farthest edge, the sun’s brilliant light had been extinguished.

The brightest spot in the sky had been consumed by darkness.

“Stories like that give you some indication of how startling and scary a solar eclipse can be, especially if you don’t know that it’s coming,” explains Dr. Mark Littmann. An expert on eclipse phenomena, Littmann is the co-author of two books on the subject: Totality: The Great American Eclipses of 2017 and 2024 and, for younger readers, Eclipse 2017. He currently holds the Hill Chair of Excellence in Science Writing at the University of Tennessee. He first heard the tale from Florence Andsager’s grand-niece, Julie Andsager—now a professor at UT as well—and was able to pinpoint the event that terrified her family so long ago: The total solar eclipse of June 8, 1918. That eclipse first became visible from land in Washington, then moved southeast, mesmerizing millions along the way, until it disappeared off the Florida coast.

The continental United States bore witness to the phenomenon 10 times throughout the 20th century. Then, after an eclipse that just managed to clip the Pacific Northwest in 1979, the skies returned to normal, and have stubbornly remained so to this day.

That’s about to change.

On the 21st of August, a total eclipse of the sun will once again make its way across the country, following a path much like the one that frightened the Andsager family nearly 100 years ago. It’s being called “The Great American Eclipse,” and it’s a pretty big deal. Posters have been printed up. Hotels all along the path of Totality have been booked years in advance. The Great Smoky Mountains National Park is turning Clingman’s Dome into—for all intents and purposes—a concert venue: On the 21st, you’ll need tickets to ascend the Dome, and they’ve long since sold out. A non-destructive natural phenomenon has become an honest-to-God cultural event.

This raises the question: why? Of all the extraordinary things that occur on our remarkable planet, what is it about a solar eclipse that so readily captures our collective imagination?

To find out, we’ll need to take a look back. Way back.

Humanity’s relationship with the solar eclipse began long before Clingman first scaled his dome or the Andsagers moved to Kansas. It began nearly 3,000 years ago, in the Middle East. The Babylonians were the first civilization to keep written records of eclipses, starting around 750 BCE. By 600 BCE, they’d become so good at it that they could actually predict when the next one would occur. The very eclipse that we’re all about to witness could have been foreseen using Babylonian mathematics: All those centuries ago, they knew of an eclipse series that recurred once every 18 years, 11 days, with each new event happening a third of the way around the world from the last one. These days, we call it the saros series and can predict it to the second, but that achievement loses a bit of its luster when one stops to think that it’s only a few steps up from a system devised more than a century before the Romans built their Colosseum.

While the Babylonians were busy cataloguing eclipses, other cultures sought to explain them through mythology. The ancient Chinese believed that the eclipse was an act of devilry perpetrated by either the Dragon or the Dog, both figures easily given to evil. As they saw it, the Dragon or his canine counterpart was attempting to devour the sun, and humanity with it. To avert this, people would greet eclipses with shouting and more substantial means of noise-making in hopes of frightening the malicious spirit away. It always worked.

In India, solar eclipses were attributed to a rather nasty demon named Rahu, who was jealous of the gods’ immortality. Showing up uninvited to a gods-only function one day, he attempted to drink the sacred water of their coveted fount so that he might live forever as well. The gods acted quickly and managed to behead him, but not before the magic elixir had touched his lips. Thus, only Rahu’s head became immortal, which has made taking his final revenge in the intervening years very difficult indeed. On the rare occasions that he manages to catch up with—and consume—the sun god, the latter simply falls out the back of his throat, unharmed.

To the ancients, eclipses were not benign events. At best, they were great cosmic puzzles to be pieced together. At worst, they were harbingers of the apocalypse. Antiquated as the idea may sound, it hasn’t died off. In 1976, the head of the Australian Optometrical Association proclaimed eclipses “far too dangerous to watch.” In 1983, Jay Anderson, one of Littmann’s colleagues was in Indonesia to observe an eclipse. Only his fellow scientists and a smattering of tourists joined him. The locals had been forced indoors by soldiers to ensure their safety.

“Eclipses can be quite unnerving,” Littmann explains. “You think you’re impervious to nature, then the sun goes away. And inside you know that if it stays that way, that’s the end.”

There’s a postscript to Littmann’s Indonesia story, however, and it’s telling. After all the civilians were herded inside, a contingent of soldiers were instructed to keep an eye on the scientists and tourists. Anderson invited them to watch the eclipse. The soldiers were reluctant—they’d been ordered to seek shelter before the eclipse reached totality—but curiosity prevailed. While their commanding officer was going berserk over the radio, demanding that the soldiers do as they were told, they watched the sky, transfixed. When it was over, the look on their faces said it all. The event that had their superiors scared stiff was the most marvelous, awe-inspiring thing they had ever seen. The soldiers and the scientists did not share a language, but that scarcely mattered. They had shared an experience.

I submit that the reason for humanity’s cultural fixation on the solar eclipse has always been the same: It is impossible to ignore. If you live beneath its gaze, you can hardly miss it. The only thing that’s changed through the centuries is the way we’ve processed this fact. The ancients found its all-encompassing nature terrifying; they could not control it or escape it, and that automatically made it something to be feared.

These days, an eclipse generates so much positive cultural energy because we’ve managed to look at its ubiquity the other way around. Instead of regarding the upcoming eclipse as something we can’t get away from, we’ve come to see its unifying potential. The Great American Eclipse is something we’ll all have in common when the sun has fallen out of the back of Rahu’s throat and the Dragon has been frightened away, when cosmic spectacle has again submitted itself to routine and the only thing left to do is ask “When’s the next one?”

The year is 2017. If the world ends, we probably won’t notice. We’ll be too busy looking up.

Tips for Viewing the Eclipse

Here’s the straight scoop on the relationship between solar eclipses and your eyeballs: during the Totality—that is, the two minutes or so in which the moon has completely covered the sun—it’s safe to behold the phenomenon with the naked eye. However, glasses should be worn at all times on either side of those two minutes. Luckily, solar eclipse glasses are readily available and cheap. (You can find them on Amazon in every conceivable flavor.)

2. Make Sure You’re in the Path of the Totality

Nearly all of the continental United States will experience some degree of eclipse on August 21st. To witness a total eclipse, however, you’ll need to be within the 70-mile-wide path of totality. Luckily for all of us who couldn’t make it out of our own homes without the aid of GPS, the good folks at NASA have mapped out the eclipse’s precise trajectory.

If you’re on the fence about whether to make the extra effort or not, Littmann recommends that you spring for it. “The difference between 99 percent and 100 percent,” he says, “is all the difference in the world.”

3. Picking a Spot to Watch: Start Big, and Keep Your Options Open

Remember: Mother Nature doesn’t care how special the eclipse on August 21st is to you or anyone else. For her, it will be business as usual, meaning that any number of weather events could come between you and the action. The best way to work around this reality is to decide broadly where you want to see the eclipse and make arrangements to be in that location as far ahead of time as possible, but stay flexible and mobile right up to the event itself.

“I’ll be watching the eclipse in the Sweetwater area,” says Nathan Phillip, Vice-President of UT’s Ask a Scientist Chapter. “There are a lot of highways down there, so I’ll have plenty of options for getting the best possible look at the eclipse. I won’t know exactly where I’ll be watching until the 21st.”

4. On the Day: Pay Close Attention to the Weather

We all know that the weather can change on a dime, especially during summertime in this part of the country. However, the state of the skies on the morning of the 21st will provide some indication of what the afternoon holds, if you know what to look for.

The most pertinent piece of advice I can offer you is also the most obvious: in the days and hours running up to the eclipse, keep eye on the weather forecast. All joking about the reliability of weathermen aside, it’s the best way to make sure you’ll be in a position to behold this natural wonder.