One last camping trip to an unnamed destination - The Knoxville Mercury 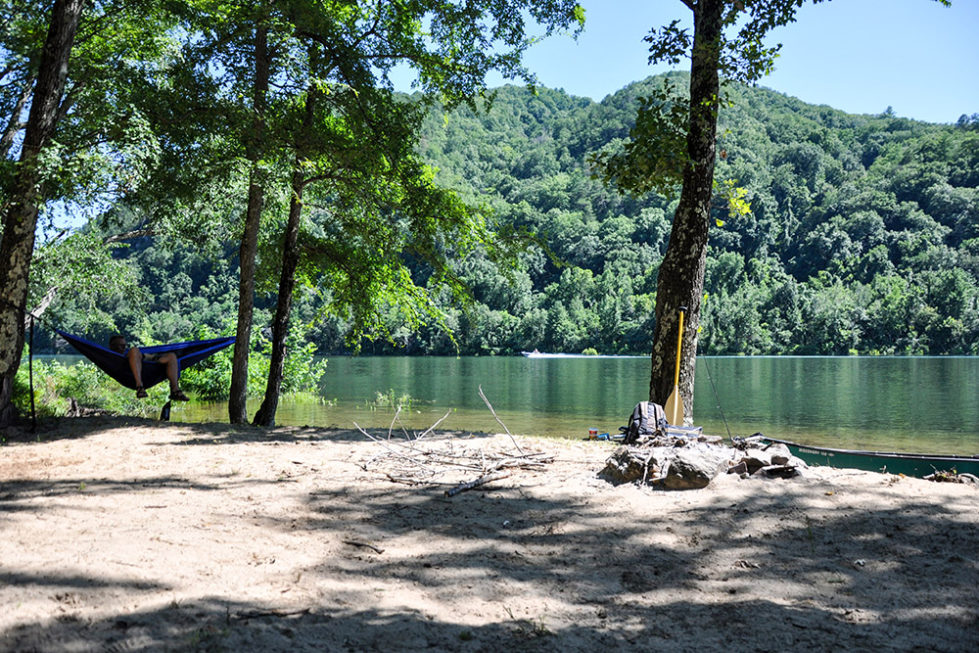 “Something’s swimming up ahead,” said biologist Drew Crain, in the bow of my canoe. We quickened our paddle strokes, then stopped when we saw what it was: a timber rattler zigging and zagging his way across Chilhowee Lake.

I’d never seen a rattlesnake swimming, much less one of this girth and length. Crain and I had just set out on an overnight camping trip to an unnamed island a mile or so downstream of Calderwood Dam. 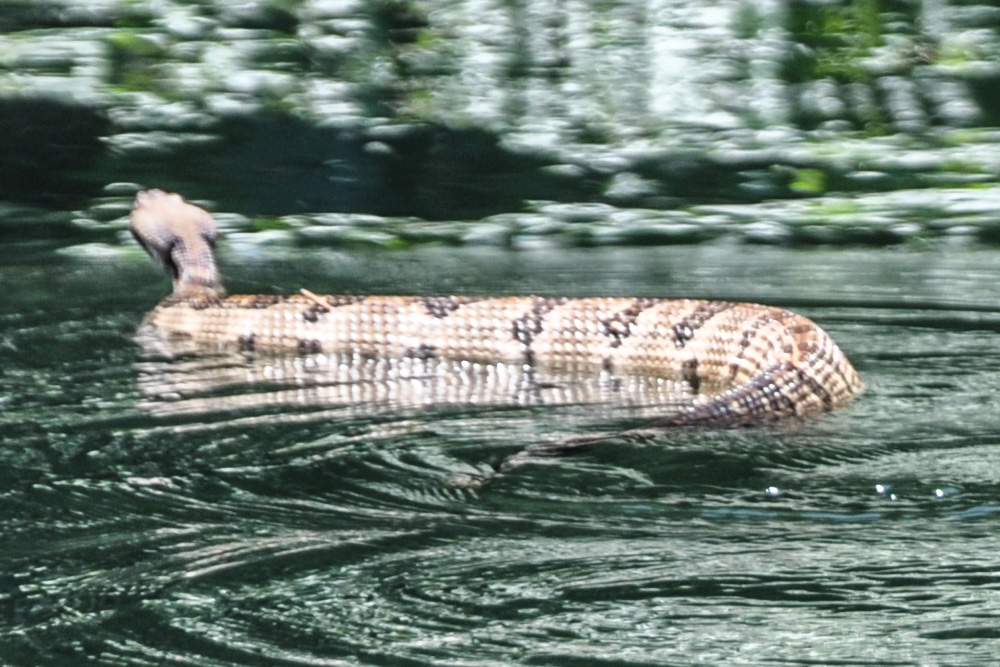 This timber rattler was crossing Chilhowee Lake near our put-in at Tab Cat Creek.

Island camping, for me, is the ultimate. Finding a little clearing with boat-only access, you’re more likely to find isolation and reasonable proximity to wild animals and undeveloped landscapes.

After a paddle upstream of about a mile and a half, we passed Scona Lodge Ferry ramp on the left bank and began scanning the landscape for the island beach where we would camp. During the drawdown and closure of Chilhowee Lake, which lasted two years, grasses and bushes had grown up so that the place looked much different than it had on previous visits.

At the campsite, a fire smoldered in the ash-filled ring, and there were signs that a somewhat bizarre camping experience had transpired. A badminton racket hung on a nail in a tree; a bar of Irish Spring soap, used but still in the box, sat on a stump; and a garbage bag full of empty beer cans squatted at the edge of the clearing.

While this was a bit disappointing, the beach, by Little Tennessee River standards, was wide, well cleared, and shady, with a view of a forested bluff across the lake (Cherokee National Forest) and breezes air-conditioned courtesy of Calderwood Dam tailwaters.

We unloaded most of our gear and headed upstream in the canoe to troll for the stocked rainbow trout and walleye that frequent these waters, where the temperature stays between 50 and 60 degrees, Crain said.

Crain tempted the fish with red worms and I opted for a silver spoon. We didn’t have any success on two trolling runs and neither were the fishermen in the two motorboats we saw, so we returned to the beach to relax.

A boat with two men and three women idled in the shade of the opposite bank, and they all made animal noises for several minutes, as if trying to get the coyotes (owls?) to return their strange calls. Then the women jumped in the water and whooped, repeatedly. I was impressed. I hadn’t mustered the nerve to wade in any deeper than mid-thigh.

After the motorboats left, Crain roused himself from a nap and suggested that we try fishing again. So off we went, paddling a bit past the point where the water started swirling, and then letting the current carry us back, our lures near the bottom. 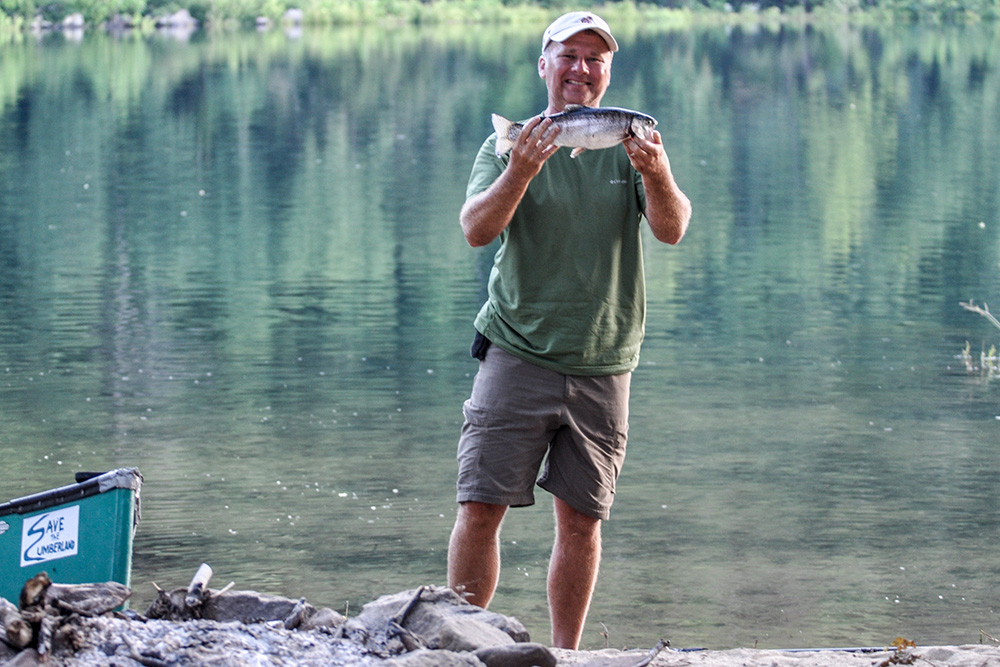 Drew Crain holds aloft a 2-pound rainbow trout, as fresh as it gets.

When we’d floated back even with our campsite, Crain got a strike. That’s when we realized we had forgotten to bring a net. He played the fish back and forth across the bow and guided it over to me to bring it in. I fumbled this simple task, and the trout, at least a two-pounder, swam back to the depths.

A couple of minutes later, one took my spoon (a Kastmaster). At Crain’s suggestion I dialed up and down on my drag and let him make a few runs to tire him out so that we could more easily land him in the boat without a net. For their size, these rainbow were fighting about as hard as any fish I’d ever hooked. This one jumped twice and surged under the boat. I got him 3 feet from the canoe, almost within Crain’s reach, but the crafty trout did something to escape.

There are few things more deflating than losing a fine fish you’ve been toying with for 10 minutes.

Crain got another strike and wasted no time bringing this one in. He swung him into the boat without ceremony, a two-pounder who had swallowed the hook.

Back on the beach, watching the trout roast over a spit, we joked a little about bears, wild pigs (noteworthy residents of the island), and other predators attracted to the drifting aroma of our dinner, including the possible return of the beer-guzzling, badminton enthusiasts.

It was the best trout I’d ever tasted, more than enough for both of us. Our seasoning consisted of salt and a shaker of something called “Sunny Spain,” which I’d had in my camping supplies for at least a decade. 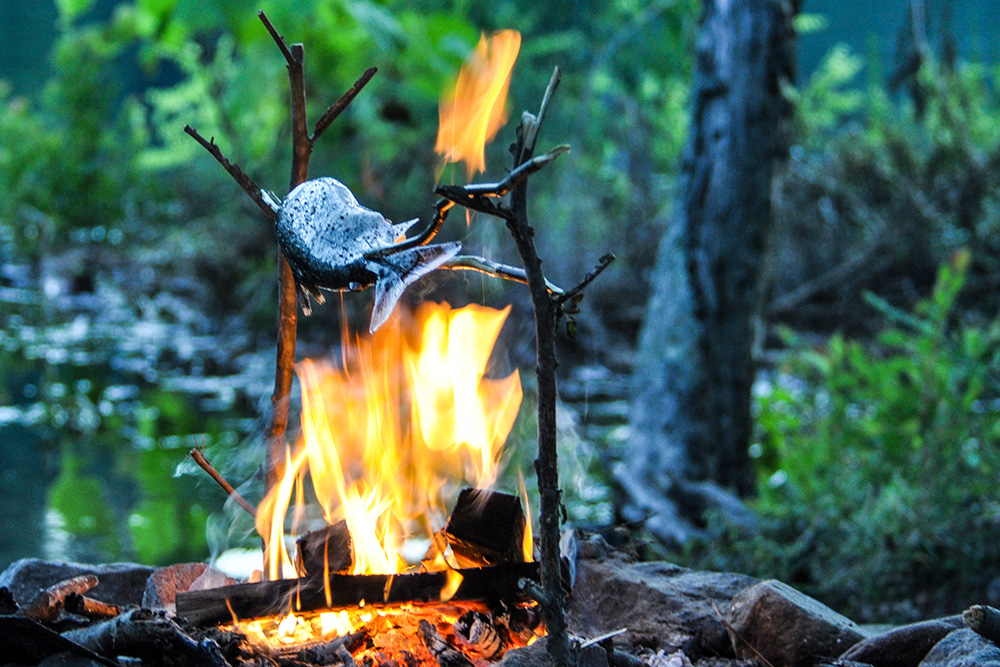 It was an uneasy night for both of us, sleeping minimalist style in hammocks. It didn’t help that this was the site of the most elaborate practical joke I’d ever heard of.

Crain has a jokester friend, who, on an excursion a few years ago, had set up a boom box on the island beach in advance of four other campers who would arrive by pontoon. At some point after dark, the jokester friend excused himself to water the bushes and turned on a tape he had made. There was 10 minutes of silence before the show began.

It started with the grunting of hogs, then escalated into general mayhem, such as dogfights. The four pontoon campers started getting uneasy because the jokester had already told them that the island was inhabited by hogs, embellishing a bit by saying that these beasts had the long tusks and aggressiveness of their descendants from Russia.

The tape degenerated into wild animal chaos from lions and tigers, but Crain, who was in on the joke, said that the campers’ imaginations had overcome their skepticism and discernment.

Jokester friend pulled out his knife and ran toward his boom box, saying, “I can’t take it anymore!” Once he was out of their sight, he acted out a valiant battle with something wild.

Two campers jumped on the pontoon preparing to leave. Another pulled out a pistol no one knew that he had. But no one went into the woods to help the poor jokester.

The campers were quite upset when he emerged from the woods laughing at them.

In my hammock, quite cozy in the cool night, I thought that for a final Mercury column trip, it would be fitting for me to be chased by actual wild hogs into a frigid lake. Or worse.

Geese honked all night, in competition with the frogs. At one point, a deer, outraged at our intrusion, released 10 or 12 shrill alarm snorts.

The most intimate animal interaction was with gnats. They waited until I dozed off to sing their subtle, wavering refrains. I’m fairly certain that they started going into one ear, through what’s left of my brain, and out the other.

Sometime that night a strange wind swept down on us from the ridgetop and whipped across the loose nylon of our hammocks. The sky was clear, but the wind gusts felt cool as October.

A nearly full moon rose over the ridge above the dam and lit up the place the entire night, so beautiful that it was difficult not to stay awake and watch. Sometime just before first light, a squadron of geese flew downriver, our wakeup call to break camp and paddle back to civilization.

Caveats: You can hear the motorcycles from Highway 129, and Calderwood Dam did release some water overnight, raising the lake about a foot, but there’s plenty of beach that stays dry, enough for three big tents. To camp this way, by canoe, you’ve got to leave your car at a ramp. Tab Cat is right off busy Highway 129, but the small parking area is somewhat concealed. Scona Lodge Ferry ramp, much nearer to the island, is day-use only and gated each afternoon at 3.

I’m grateful for having the opportunity to share my voice in the wilderness with Mercury readers. I made many new friends and learned much on these little adventures. Thanks to all who accompanied me as companions and readers. I encourage you to enjoy your own islands, to nurture and protect the wild within and without.