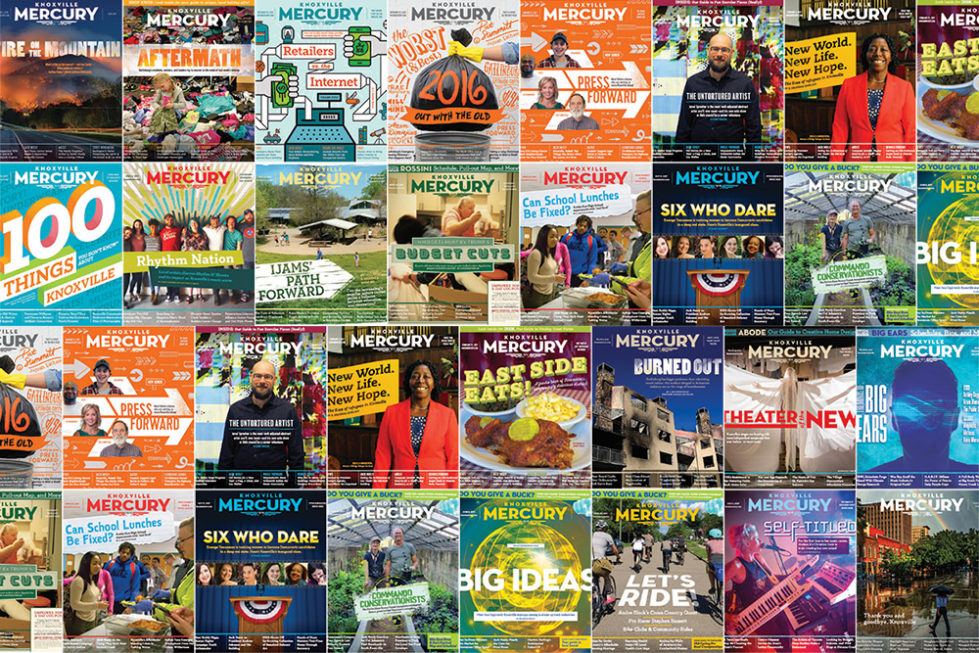 With our announcement in the July 6 issue that we would cease publishing the Mercury, many readers asked us questions in emails and social media. Here are some answers.

Why did you decide to pull the plug?
After two years of hitting our heads against the wall, we were running out of money and out of ideas for new ways of asking for money or selling ads. Each fundraiser we held collected less money than the one before it. (About 1 percent of our readership responded to our most recent month-long fundraising campaign.) We were able to make a profit from special issues and guides, but we weren’t able to enlist enough advertisers for the regular weekly issues. In the end, we found there just wasn’t a large enough market in Knoxville to buy into what we were producing.

Why didn’t you just announce a few months ago, “Hey, we’re going to go out of business unless everybody who likes the paper makes a donation!”
Catch-22: We were also trying to be a business—and it’s difficult to find clients willing to put their money into a business that says it’s failing. We tried to make our pleas for money urgent, yet provide you with good reasons to donate beyond just “We’re going to go away if you don’t.” Unfortunately, we couldn’t figure out an effective way to continually inspire people to send money to a newspaper—it’s still a new idea as far as charitable causes go.

So if we asked all our friends on Facebook to contribute, would that put you back in business?
Small patches of emergency funding aren’t going to fix our long-term problems. We believe it will take a considerable sum of money to make an independent news-driven paper successful here—such as in the form of an endowment that earns enough money for operations. Advertising revenue and donations just didn’t add up for us. Our original break-even goal was $15,000 in ad sales + donations per week. Metro Pulse, our previous paper, averaged at least $20,000 per week in ad sales alone, so we thought we could make a go of it. After budget cuts, we reduced our weekly break-even goal to $13,000 per week; we actually averaged around $10,000 per week in sales. So close, yet so far.

Were you spending lots of money on parties or new cars or something?
No. We reduced our staff to the smallest size we believe capable of producing a professionally written and designed newsweekly: two editors, one art director, one sales director, two sales reps, one part-time reporter, one part-time designer, plus a part-time business manager who was very generous with his time. (With a smaller staff, we would simply have not been able to keep our promise of delivering in-depth stories on local issues.) Nobody filed expenses. We dropped our health benefits. We didn’t have budgets for marketing, a webmaster, or, later, even photography. Meanwhile, we were able to secure office space in the Arcade Building, with rent paid for in an advertising trade with its owners, Kevin and Melinda Grimac. Payroll was our biggest expense, and we all made about the same salary, well below what some of us used to make.

Why didn’t you charge for the paper or offer subscriptions?
In order to collect money on per-paper sales, we would have had to create an infrastructure to support it: new metal boxes with coin machines and a network of shops that would charge the cover price and share the proceeds with us. It would have been very expensive and difficult to manage, with unpredictable results. As for subscriptions, in order for the papers to arrive in a timely manner in undamaged condition, we would’ve had to use first-class postage, plus envelopes—so, to make a profit, we would’ve had to charge around $100. We did not believe there’d be enough people willing to pay that much money to make it worth all of the extra effort the mail-outs would’ve required every week.

Or what about going all digital? Wouldn’t that have saved you a lot of expense and made the Mercury financially feasible?
In our experience, online revenue at a local level is inadequate to pay a full-time staff of journalists. As a niche publication in a small market, our site had nice traffic numbers but not the scale typically needed to make good money on Web ads. We did ramp up efforts on the digital side with a site redesign, more digital-only content, and an email newsletter—and it showed positive signs but not a big impact on sales in the short term.

From the start, we paid our staff and our freelancers. This was not an unpaid “citizen journalist” effort, but rather one that was as professional as we could make it. That requires a good-sized budget, and local print ad sales bring in much more money than online only. The trick is selling enough of them to cover your payroll, which we ultimately failed to do.

There are independent news-only websites like the Lens in New Orleans that have a staff—but they are a 501(c)(3) themselves and are able to earn grants rather than sell ads. However, we wanted to cover arts and culture in addition to news, and believed we had an existing client base of such advertisers to support the effort. So, we went with the unique route of a 501(c)(3) owning the paper, which allowed us to sell traditional advertising. It proved to be a complicated arrangement.

Couldn’t you have asked for money from some of Knoxville’s wealthy benefactors?
We asked for help from anyone who would take a meeting with us. We did receive some donations that kept us going, but not enough to solve the problem of ongoing low ad sales.

What about business investors?
Since we are owned by a nonprofit, the Knoxville History Project, there was little impetus for anyone to make an investment in the paper—profits would have gone back to the KHP.

So what’s going to happen to all of your stories?
We’re going to keep them online as long as we can afford to pay the Web host bill. The Knox County Public Library also has a complete collection. Furthermore, if any of our freelance writers wish to continue contributing without charge, we will post their work on knoxmercury.com and link them on Facebook and Twitter.

What will you do next?
We’ll be looking for jobs. If you have any suggestions, you can still contact us at our knoxmercury.com email addresses.

We might also tackle one-off projects under the Mercury name if we think they’re worthwhile and benefit the Knoxville community. Stay tuned.