Churches, Sex Shops, and Hyperloops: Looking forward to the past - The Knoxville Mercury 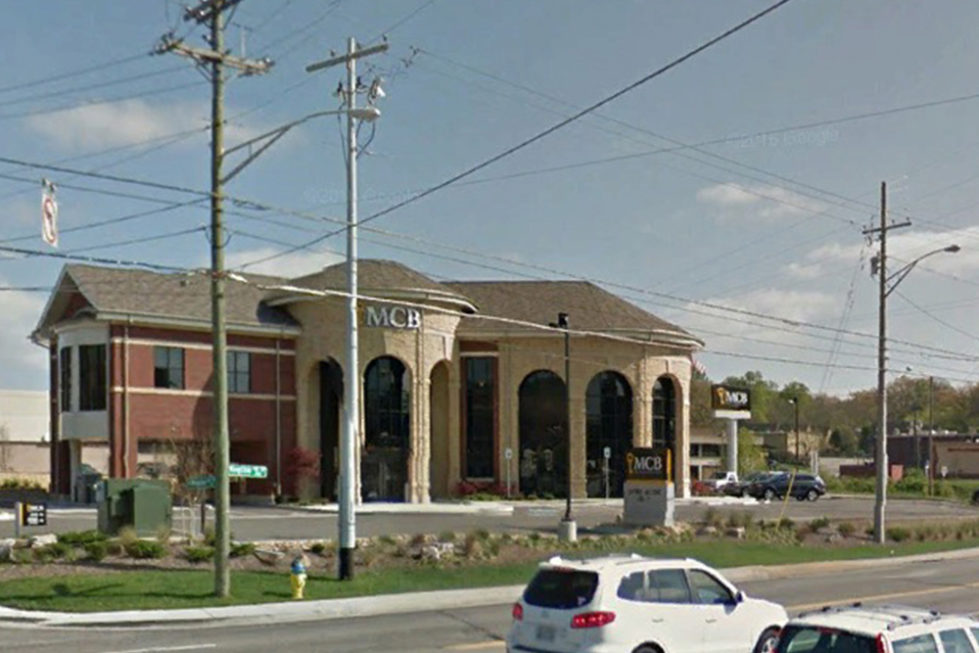 This column ran in the first issue of the Mercury: “Pro Bono Publico,” (March 11, 2015). Rather than starting with a downtown-centric topic, I wrote about the new branch building for Mountain Commerce Bank; at the time it was still under construction amidst the vehicular debris field that is the intersection of Northshore Drive, Papermill Road, and Kingston Pike.

My intent wasn’t to judge the bank’s design. Rather, it prompted me to ask some basic, wide-ranging questions; why in American post-war culture has the suburban house become the model for any number of public, civic, or commercial buildings? How is it that a premise, unthinkable during the first four decades of the 20th-century, in relatively short order, became the ur-form for just about any building type after the war: an interstate rest stop or professional offices; a state police barracks or a preschool; a place of worship or a sex shop? If this doesn’t seem odd, you are not alone. It is this sort of inquiry that generated this first article and the 26 that followed—to critically examine the constructed environments we inhabit, but rarely see. 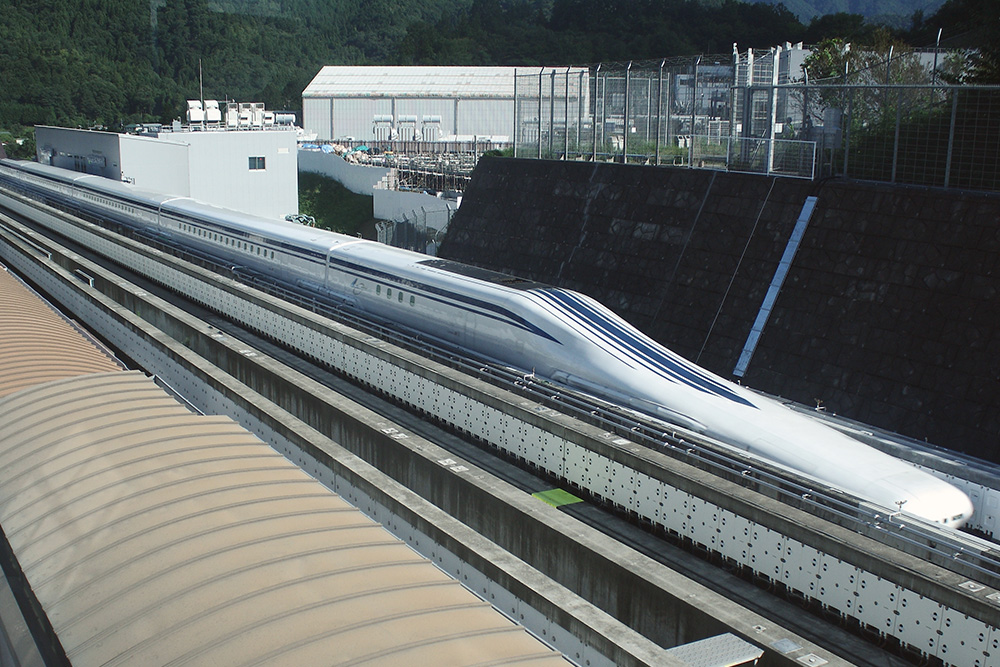 “Trains, Plains, and Auto-fields: Another Marshall Plan/A Second TVA” (March 29, 2017) was a brief history of the life and death of passenger rail travel in East Tennessee. I argued that if we don’t re-start (very high speed) rail travel during the next two decades, this part of the state may find itself irrevocably isolated, economically and politically, not only from the region, but from the entire country.

The Congressional Research Service (part of the Library of Congress) explains in a December 2013 report: “Maglev [magnetic levitation] train technology was developed in the United States in the 1960s. It uses electromagnets to suspend (levitate) the train above a guideway, as well as to propel the train. The lack of direct contact (and hence friction) between the train and the guideway allows maglev trains to go very fast… [with] relatively little wear and tear and hence…have low maintenance costs….” There are, of course, some downsides to the technology that explain why there are only a few hundred miles of Maglev service operating on the entire planet almost entirely in Asia; cost is not the least of these.

Maglev trains seem conventional compared to the Hyperloop, Elon Musk’s theoretical land-based speed-of-sound travel system. A company called Hyperloop One is developing a prototype of its new platform in the Nevada desert. On May 12, 2017, it successfully tested its first passenger pod in its Hyperloop vacuum technology, moving at 200 miles per hour for 3 seconds on air. 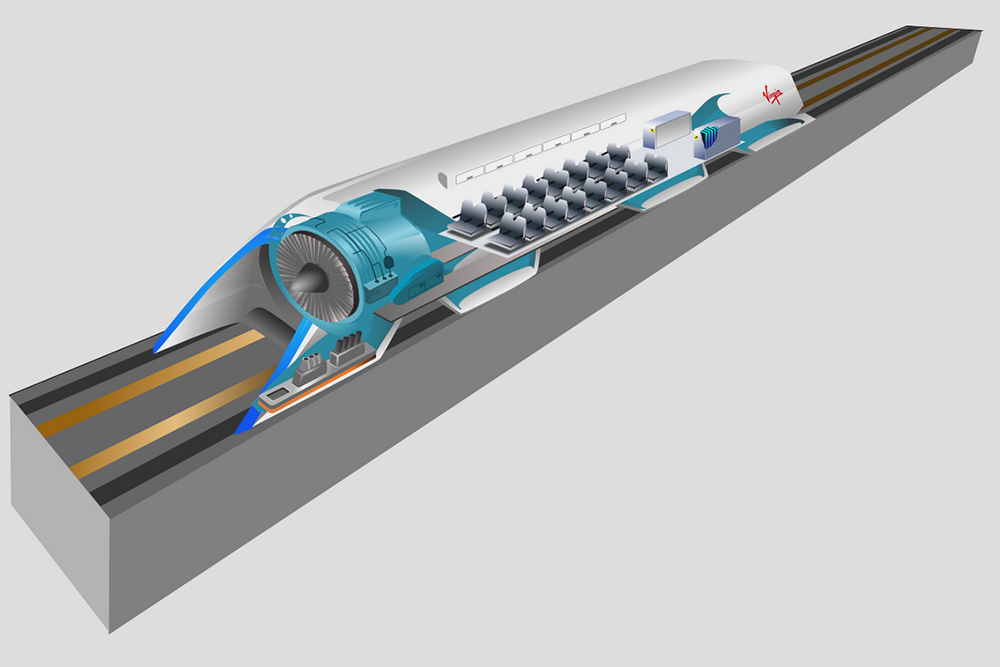 The basic technology (pneumatic tubes developed to transport messages in small canisters) has been around since the Victorian era, but has been ramped up exponentially in the Hyperloop system; it is different in kind, not degree. A recent article in The Wall Street Journal reported: “Dubai last year announced a deal with Hyperloop One … to explore linking [the city] with Abu Dhabi in what would be a 12-minute ride averaging 375 mph in pods through low-pressure tubes. Currently the roughly 75-mile trip takes more than an hour by car. Every city in the Gulf region could eventually be reached in less than an hour if a full network is eventually rolled out, Hyperloop One executives say.”

There you have it: While oil-producing states are investing tens of billions of dollars in renewable (Tesla) or completely new energy technologies (Hyperloop), oil-dependent America just elected as its 45th president, someone who pledged to bring back “beautiful clean coal” and still needs convincing on climate change.

Teaching and writing critically about the constructed environment in a post-Paris Accord America, and having grown up in a Pennsylvania county once rich in both natural beauty and mineral resources (anthracite coal), in what is now an economically depressed and resource-depleted northeast region, phrases such as “clean coal” reek of snake oil. Yet it all seems very familiar—part of a longstanding false nostalgia that shines a light on a narrow spectrum of the past to valorize the powerful few in the present rather than the less-powerful many. 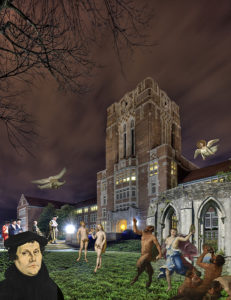 “Capriccio of Ayres Hall as Setting for a Gothic Locus Amoenus.”

Closer to home, this cockeyed back-to-the-futurism fuels the fuzzy-headed myth-making on the UTK campus, the results of which are its uncritical, ahistorical adoption of a banal mis-named architectural “style” for over $1 billion of new construction, chronicled in, “Collegiate Gothic at UT’s Knoxville Campus: Architectural Relativism in the Post-Fact Age,” (October 27, 2017). Yet these are the insipid sorts of buildings that families of wealth and power require before appending their name above the door or their signature to a check.

A cynic, Oscar Wilde tells us, is “a man who knows the price of everything and the value of nothing.” During the past decade there seems to have been a coterie of cynics at work (albeit well-intended ones) making costly, enduring decisions about the campus—demolishing fine architecture and important history, putting up in its place buildings that, in many cases, resemble a vague past that never existed and built to lesser standards (“Build, Raze, Repeat: UT’s New Mantra for New Dorms on Knoxville Campus.”)

In a recent article marking the opening of the new Stokely Hall dormitory, the Knoxville News Sentinel gushed over what it called UTK’s “forward-to-the-past look”–a phrase that makes “beautiful clean coal” sound almost scientific. The recently hired UTK Director of Design explained in the same Sentinel article: “We’re really interested in branding the whole campus…. To do that, we’ve adopted a Gothic vernacular that we jokingly call Tennessee Gothic. It’s not a true Gothic style, but a modernized Gothic style. It’s like we are trying to get all the voices in the choir to sing in the same key. The buildings don’t have to be identical, they just have to sound and look pretty together.”

Universities typically turn to overall planning strategies and landscape architecture to unify differing architectures and epochs. A quadrangle or a town square need not be made up of buildings that look the same, or similar for that matter. What matters on urban and architectural scales is not the choir, nor the key in which it sings—it’s more about coherence than “pretty.”

While there are several iconic American campuses with consistent architectural characters or “styles,” they are few. Typically these zones are limited to historic precincts belonging to the oldest section of a college. UTK has one; it’s called The Hill. As campuses develop and expand over time, the character of the architecture tends to change, as has at UTK. A longstanding school of thought in urban design and historic preservation holds that by mimicking nearby buildings (such as Ayres Hall) that have legitimate claims to an historic status, a newly built imitation devalues the original by muddling difference and corrupting authenticity.

The Carolyn P. Brown Memorial University Center was a UTK original. Designed by Barber McMurry Architects and completed during the Eisenhower Administration, it was the first “modern” building on campus. Sited discretely away from and above Cumberland Avenue, anyone who used it on a regular basis knew well that it had some lousy interiors, and terrible “improvements.” Yet, its Cumberland façade was elegant, spare, and stately; its interior along the avenue had lovely moments. Most could have been incorporated into the new center; all were destroyed.

The best thing about the building, however, may not have been the UC itself, but its parking garage, added later by the paterfamilias of the UT School of Architecture, Robert B. Church III. Those who parked in it may have no idea what I’m talking about. If one traversed it, however, while walking campus, meandering its network of stairs, narrow passages, light wells, pergolas, and honorific spaces, one could apprehend that garaging 200 automobiles was the least of its purposes. It was made for the flâneur in all of us. 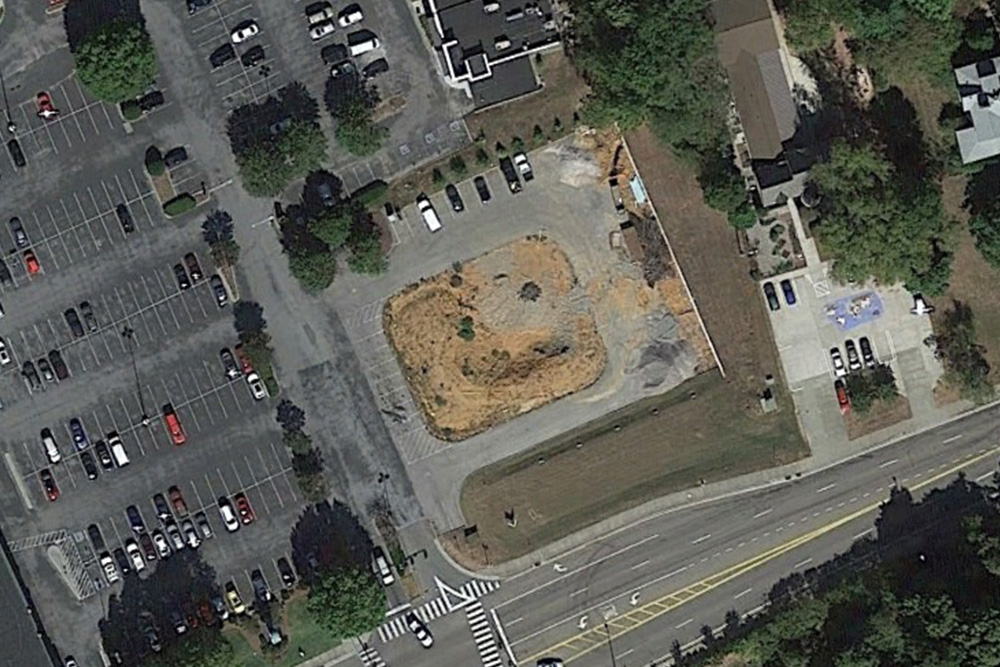 “Mind the Gap” (October 28, 2015) reported on the demolition of the former branch of the First Tennessee Bank at Western Plaza. It was one of the state’s finest late-mid-century Modern buildings—yet another loss of a fine Robert B. Church III building. The site sat fallow for almost 100 weeks following the landmark’s hasty one-day demolition by the Asheville, North Carolina developers who control the property.

A recurring theme in this column during the past 27 months has been loss—of memory, of pastness. This isn’t simply about lost things, although that is part of it. Neither romanticism nor jingoism, the loss is also of a collective memory of events and places. It is the stuff upon which cultures construct themselves over time—it is the stuff of which cities great and small are built.

Cities and universities must change over time or they risk becoming museological; Venice, Italy is such a city. It ceased developing about the time Napoleon crossed the Alps. Change is always difficult; intelligent change is harder still. The best cities, “great” or “livable,” are those that build upon their past while privileging the present in service of potential futures.

I have lived in American cities in which almost nothing of value from their past remained. The losses did not happen all at once. They almost never do. They happen, often in the early morning or during a holiday, while few are looking, one bank building, one ancient grove of trees, one exquisite-concrete-sculpture-masquerading-as-a-parking-garage at a time.