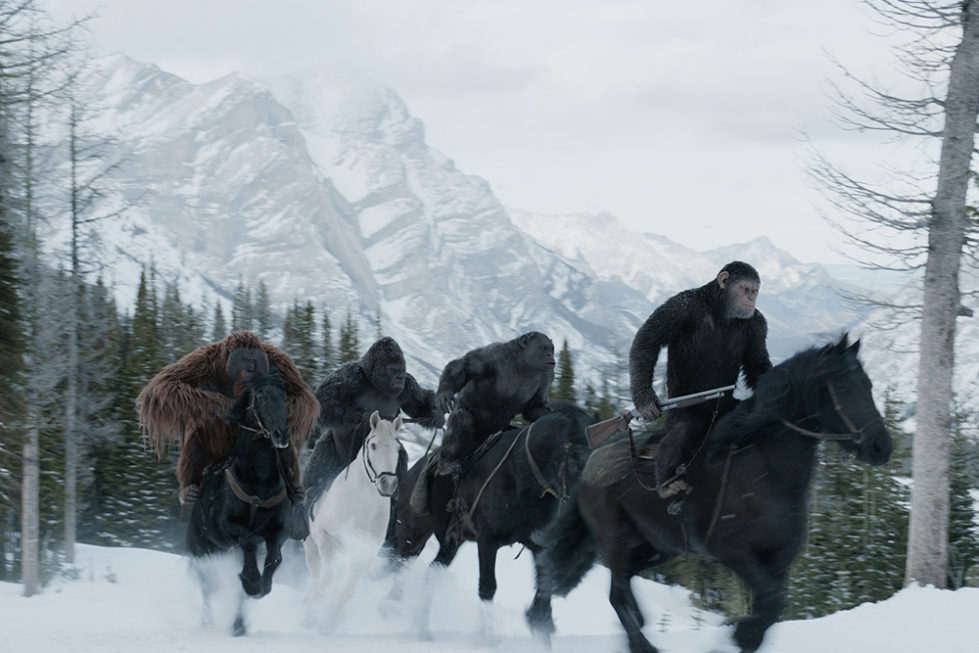 I’ll confess up front that, before director Rupert Wyatt’s 2011 reboot, I was never a Planet of the Apes fan. I’m not a detractor of the original cycle of films by any means; they just don’t hold any particular appeal for me, and Tim Burton’s ill-conceived 2001 remake didn’t change that. Wyatt’s film did, though. I went for the promise of Weta Digital’s groundbreaking visual effects, and because actor Andy Serkis is always a marvel to watch. I stayed for a savvy, thoughtful sci-fi thriller that, as it turns out, launched one of the genre’s most consistently rewarding trilogies.

I’m glad the first two installments won me over, because otherwise I might have missed the experience of seeing War for the Planet of the Apes in a theater. And that’s absolutely the way it should be seen: on the biggest screen you can find, as free from distractions as possible. The visuals are certainly a big factor; Michael Seresin’s breathtaking 65mm cinematography is enough to warrant repeat viewings, and the effects are so good that it only takes a few minutes to forget you’re watching effects. But War backs up its dazzling imagery with emotional heft and the kind of moral complexity that rarely shows up in blockbuster franchises.

The film picks up a few years after 2014’s Dawn of the Planet of the Apes, with a war still raging between what’s left of the human species and the highly evolved apes that are thriving in the wake of the simian flu outbreak. Or at least they would be, if a fanatical U.S. Army officer known only as the Colonel (Woody Harrelson, in full-on Col. Kurtz mode) would stop sending raiding parties into the forest to kill the apes and hunt down their pacifist leader, Caesar (Serkis).

Before we go any further, let’s talk about Serkis. Of all the offenses regularly committed in the name of the Oscars, one of the most puzzling is the Academy’s insistence that motion-capture acting isn’t really acting. That stance has always been dumb, but Serkis’ work in this film, and the performances of his fellow motion-capture actors, should make it absolutely untenable to any reasonable person.

Since he first played the character in Rise, Serkis has inhabited the role of Caesar as fully as any actor in a traditional performance, and War gives him the best showcase of his career to date. Wearied and haunted, Caesar has assumed the role of a simian Moses figure, intent on leading his followers to a distant new land where they hope the Colonel and his cultishly devoted soldiers won’t pursue them. (Director and co-writer Matt Reeves has acknowledged that classic Hollywood biblical epics were a conscious influence.)

Before they can leave the forest, though, Caesar suffers a devastating tragedy at the hands of the Colonel, and he’s no longer content to simply flee, or to adhere to the principles of nonviolence that have guided him so far. Accompanied by the kind-hearted orangutan Maurice (Karin Konoval), his loyal right-hand ape Rocket (Terry Notary), and the imposing gorilla Luca (Michael Adamthwaite), Caesar sets out to track the Colonel to the snowy, sprawling encampment that serves as his unit’s base.

War begins with a masterfully staged battle scene, but it has far more in common with midcentury revenge westerns and classic Hollywood dramas than war movies. Reeves and co-writer Mark Bomback stay laser-focused on Caesar’s struggle to define himself in the face of nearly unimaginable suffering and to maintain his decency when confronted with horrific cruelty. There’s visual spectacle and visceral thrills to spare, but every memorable scene, including the explosive set pieces, hinges on the value of empathy, or what happens in its absence. Such thoughtfulness and clarity of vision is impressive by any standard, but when you consider we’re getting it in a summer action movie that’s a sequel to a sequel to a prequel, and the ninth film in a franchise, it seems almost miraculous.