On the prowl for bluegill, bobcats, and wild hogs at Abrams Creek - The Knoxville Mercury 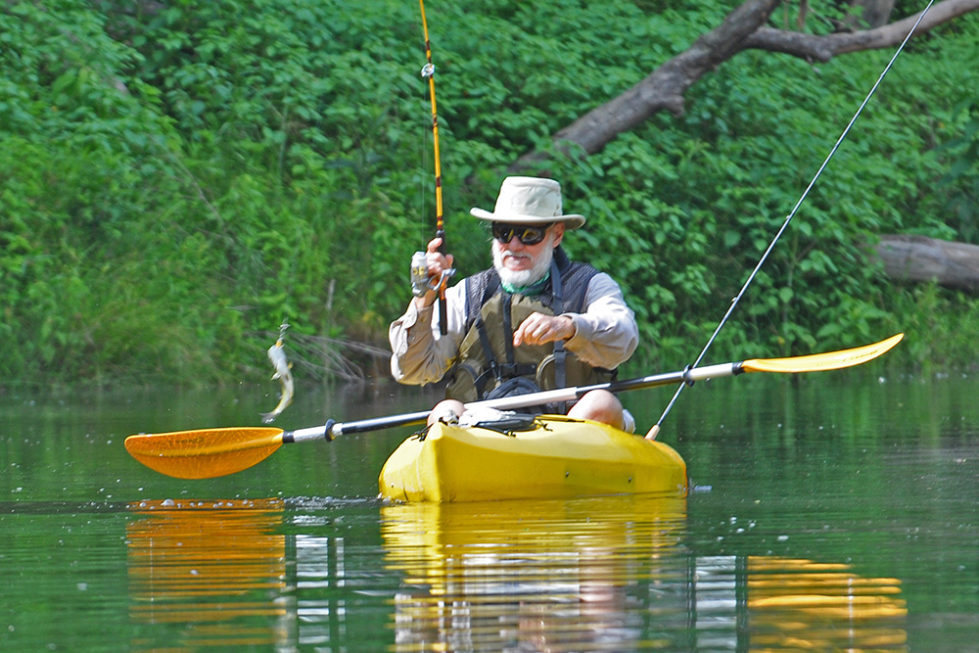 “I’ve heard that socks and sandals are out,” I said to Terry Bunde as he dragged his kayak down a steep bank, slippery with loose shale, toward Abrams Creek. “I read it in Men’s Health.”

I should have known better than to make fun of Bunde, who shrugged it off and focused on outfishing me and biologist Drew Crain on the first day of summer 2017.

Chilhowee Lake, gradually being raised after dam repairs, was still off-limits, but Abrams, one of its tributaries, had reached a navigable level, though still 10 feet or so below its normal pool. (The reservoir itself reopened on July 1 at noon.)

We had the feeling of exploring virgin territory, somewhere that few had boated or fished in the two years since the drawdown of Chilhowee Lake. Crain had heard from a friend who had paddled up Abrams the week before: He had not only fished an active bluegill bed, but had also seen a bobcat cross a log that had fallen across a tributary, Panther Creek. We brought fly rods and poppers in preparation for non-stop bluegill action.

For some reason, Bunde, a retired chemistry professor at Maryville College, brought a casting rod as well as his fly rod. Cue ominous music.

Right away, as we paddled up the creek, maybe two-thirds its width at normal pool, I got the feeling that we were being watched, that we were intruding. Since I put in last and had to get my camera and fishing gear situated in my kayak, I was a hundred yards behind Bunde and Crain. Up on the right bank, I heard something crashing through the woods with enough force to break some good-sized branches. I got a glimpse of a piglet before it disappeared into the growth.

“Hey guys, I just saw some wild hogs!” I had to yell at them a couple of times.

Crain came paddling back to me, all excited and shushing me. He explained that the hogs were very skittish. They crunched around for a minute, but did not reveal themselves again. 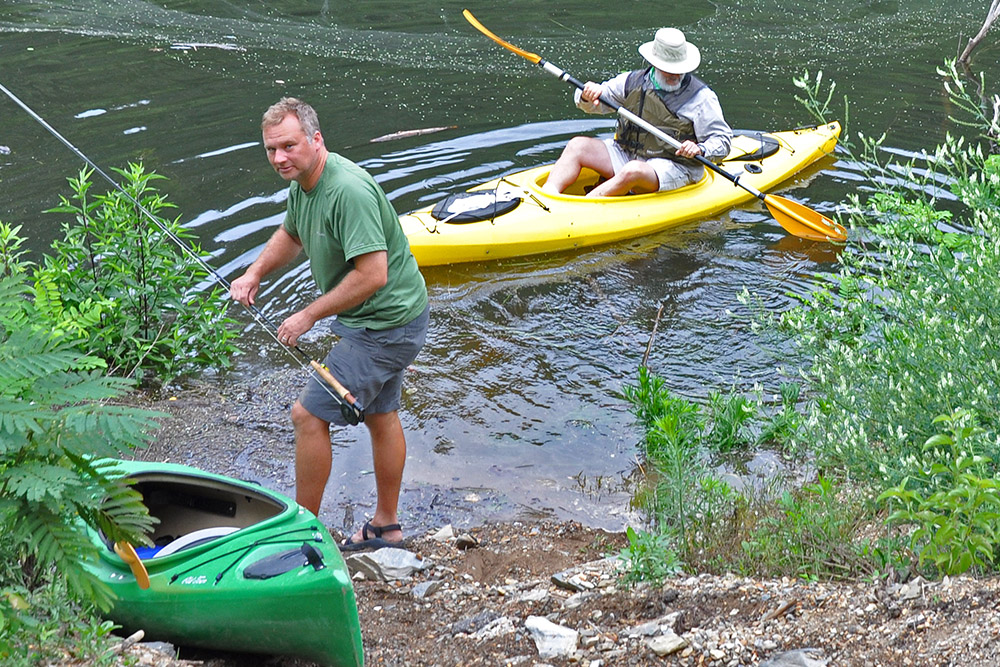 I was embarrassed about my wildlife photography faux pas, but really, it was the bobcat I wanted to photograph. Toward Panther Creek I paddled in search of the alleged bobcat, not having made a cast with my fly rod. I found where Panther Creek should have been, but it looked so much more narrow and overgrown in the low water that I had my doubts. Spanning the creek was the ideal log for the bobcat photograph, but one key element was missing: the cat.

About this time, Bunde was holding up his first fish, a bluegill. He’d caught it below the surface retrieving a Beetle Spin lure with his casting rod. Crain and I made obnoxious ratcheting noises as we drew out line from our fly reels and tossed our floating poppers toward the willows and weeds that had grown up since the drawdown. It looked like prime bluegill territory, very fishy, and every now and then, we could even smell them.

A couple of hawks screeched repeatedly at us from a dead tree on the left side of the creek. Crain said they probably had a nest in there. He paddled on ahead of Bunde and me and would later claim he caught a small bluegill that he threw back.

I got out ahead of Bunde, too, in hopes of tempting the bluegill with my bumblebee popper before Bunde came along with his Beetle Spin. At one point, I had to stop and wait for Bunde to untangle my bumblebee from my retractable rudder.

I caught up with Crain at the point where the creek bottom came up and the rapids started in, maybe 2 miles from the put-in. When we saw Bunde again, he was pulling a fish out of the water, what he was calling a hybrid between a white bass and a striped bass (also known as a Cherokee bass).

He looked surprised when he saw us. “I thought you guys were somebody else,” he said, thinking we were coming from the put-in. He’d gotten in such a fishing zone that he forgot which way was up.

I tried a Wooly Bugger, a kind of wet fly that I made dart underwater by stripping line from the fly rod. No luck. Finally, I just dragged it behind the boat in a halfhearted attempt to troll.

I started yakking at Bunde, who was 20 yards downstream from me and fishing hard, about the Chicago Cubs, a team that we had long rooted for. We were trying to remember which player had been accused of domestic abuse. Then Crain came back toward us from Panther Creek with his finger to his lips again. He’d just seen the wild hogs right next to the bank and wanted me to get up there with my camera and long lens. He hadn’t brought his own camera, which is a guarantee that you’ll see something extraordinary.

Up the creek we went, silent as we could be. The hogs were gone. Apparently, my boring baseball gossip had driven them into the woods. Strike two!

Bunde just kept on fishing. The last thing I heard was him complaining about the sharp dorsal fins of the bass he was catching. Crain and I refrained from commenting.

The bobcat had not revealed itself, and the bald eagle we saw had been too far away for a decent shot. All I had were pictures of Bunde catching fish. 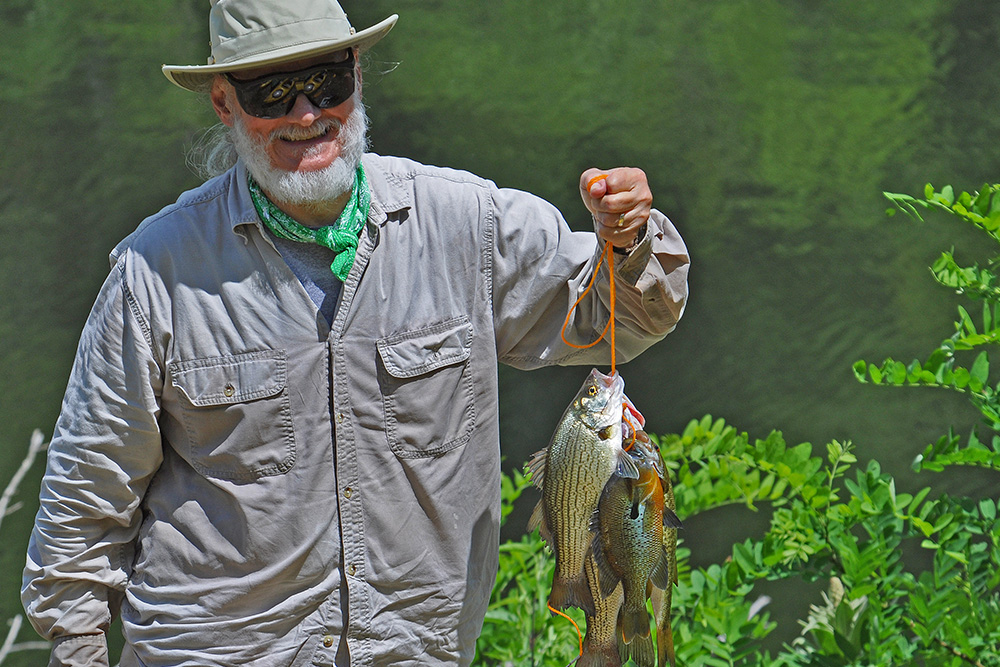 Terry Bunde took his catch home to clean and freeze for later.

In the photos were clues to his success. He had two rod holders on his kayak, convenient for trying different strategies. He wore these polarized goggles with bifocals built in to help him to tie on lures and also to protect his eyes from the backcasts of competing fishermen. He had a good-looking brimmed hat that probably helped him see fish.

Later, he told me he had bought his reel for a dollar at a church community benefit sale and that the rod was a 50-year-old Eagle Claw trail rod that broke down into four pieces.

Fish or no fish, experiencing Abrams Creek at this level gave us hints of what it must have been like before dams such as Chilhowee were built and the Little Tennessee and its tributaries flowed freely. If you go: socks are optional, thick rubber gloves for handling bass, de rigueur.