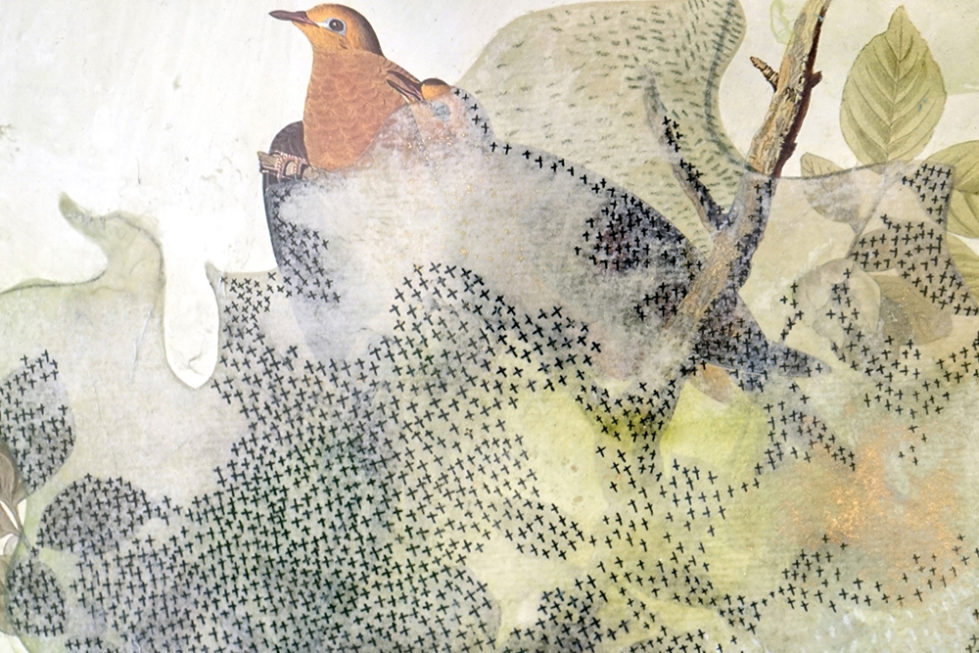 In the four years since its founding, in 2013, the turnover of artists in the Vacuum Shop Studios has been very low. The roster has been made up of both recent bachelor’s and master’s degree recipients from the University of Tennessee—all of them female. The association between female artists working in an old vacuum cleaner store sounds like a horrible archaic joke on ideas about woman’s work, but is instead just a random set of circumstances of who needed space at any given point in time. The studios’ current artists will have work on display this month in a group show at the Emporium Center.

Jessie Van de Laan, one of the co-founders of the Vacuum Shop Studios, works in a variety of media, from printmaking to fiber, and often combines them in ethereal installations. The works she has on display in this exhibit are fiber art translations of her abstract spatial prints and drawings. She works with overlapping transparent washes on paper, reminiscent of interior spaces that can be interpreted as geologic and anatomical. When the images get retranslated to fiber, she uses a huge variety of fabrics, from felt to organza. In “Fibrous Integument 2,” a tiny cluster of luminous beads shine like mica particles in a dull striation of stone.

Both Kelly Hider and Erin Mullenex masterfully embellish the surfaces of photographs and vintage prints, respectively, to present a reinterpretation of the original images. Hider uses her own photography and vintage found photographs; the surface decoration defines the hidden meanings in an image. Her recent work uses glitter-flocking embellishments, which, when used in clusters, resemble patterned wallpaper. In “May Baby,” a diagonally cropped photo removes the center of the frame so that only the head and lower appendages of a seated woman in an overexposed photo are visible. Her eyes peer over the dress that flows over her knees. The flocking is carefully applied on the skirt, appearing to be the same as the pattern of the cloth, and subsequently flows off the right edge, where it floats bodiless over the background. The dissection of the figure and the presence of pattern as apparition are unsettling.

Mullenex has included four of her “Audubon” series. The ornithology prints from John James Audubon’s classic folio are enhanced by Mullenex’s collaged overlays. “Jetstream” uses colorful cutouts of earth’s atmospheric currents with directional arrows as additional compositional structures. “Audubon: Affected Areas” uses cut swirls of translucent paper with drawn bird-flocking patterns over his “Carolina Turtle Doves” print. Also known as mourning doves, the birds somehow manage to survive despite having tens of millions of their members shot yearly as game birds. The empty areas in the flocking drawing seem to suggest these losses.

The four painters in the group are an interesting mix of contrasts. Heather Hartman creates smooth panels of flawless myopic images of light effects. The dreamy images conjure up overexposed landscape photos. The four-panel piece included in the exhibit is especially atmospheric. Eleanor Aldrich handles paint more as a sculptural media. In fact, she adds so much commercial construction adhesive and caulking in her work that you have to guess what it is you are looking at. She experiments with combinations of materials like a chemist in a lab. She will pipe on beads of caulking, straight out of an application gun, as a linear drawing tool. Thickly applied paint will become bas-relief when she pulls a tiling trowel though it. “Girl With a Seagull Tattoo” used both methods with rich results.

Deborah Rule and Chelsea Nunn are the youngest members of the group. Rule’s reductionist paintings on stretched paper appear to be simple abstract experimentations with water media, but their titles instantly reveal their content. Each one is a statement on various forms of birth control. “Once a Day” shows the 28 circles of pills in the grid found in a case of classic birth control pills. “Five Years” is a pattern of repeated IUD shapes. “Three Weeks” creates an illusion of 17 bas-relief NuvaRings.

The final artist in the exhibit produces work well known in Knoxville. Ashton Ludden works at our local Trader Joe’s and produces all the hand painted signs in the store, both permanent and seasonal. She also was commissioned to produce the poster for the 2017 Market Square Farmers Market that has been sold in a limited-edition print. The prints she chose for the exhibit are from a series exploring human relationships with other species. Why do we treat a pet as a creature with rights almost equal to humans and another mammal as just food? Her commercial sign-style lithograph, “Summer Savings,” finds a polar bear on a tiny iceberg. “Out of Stock” features a detailed illustration of a single African elephant strolling to the right of the picture plane, with a tiled grid of silhouettes in the background showing the same species walking in the other direction. It is an elegant and simple depiction of a possible extinction.

It is always a pleasure to find a group exhibit in which so much of the work is informed by not only intelligent consideration, but considerable skill.