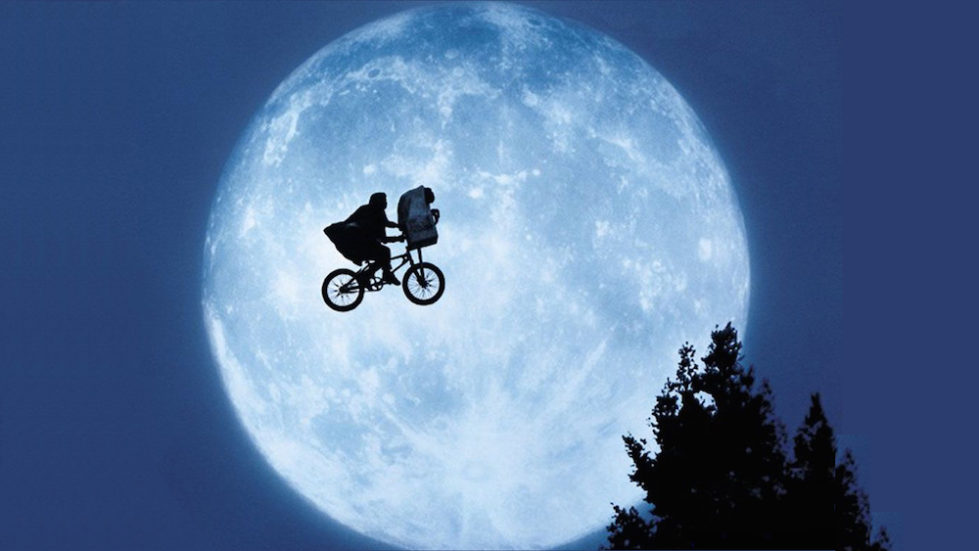 Welcome to the Summer Movie Magic Retrospective, in which I’ll take a look at the classic films showing in the Tennessee Theatre’s Summer Movie Magic series, sharing my impressions of the movies and then taking a stab at identifying the elements that have allowed it to transcend its own time and become an abiding classic.

Watching E.T. the Extra-Terrestrial for the first time since I was Elliot’s age, I was struck by the film’s fearless use of silence. I’m not talking about complete silence—between the film’s vivid sound design and John Williams’ Oscar-winning score, there are few objectively quiet moments. What I’m talking about is the sparing use of dialogue in Melissa Mathison’s screenplay. Whenever possible, the film’s essential elements—the narrative, the setting, the characters and their arcs—are put across visually.

Consider the opening scene, which unfolds without a word. Gentle, curious E.T. is abandoned and then pursued, seeking refuge in the nearby neighborhood. Images tell the whole story. Between the good look we get at the alien spaceship’s plant-filled interior (a minor detail that will have a magnificent payoff) and E.T.’s tranquil contemplation of the suburban landscape, we can be sure that he and his colleagues come in peace. When the faceless goons arrive, their indiscriminate shattering of the landscape and mood with high-beam headlights and revving engines instantly signals their malicious intent.

The confidence with which director Steven Spielberg allows images to carry the opening of the film immediately sets E.T. apart from the bulk of children’s cinema, which are too often chatty and fail to consider kids’ sense of wonder. Spielberg understood that all the interstellar spectacle in the world has little meaning for kids and adults alike if it doesn’t reflect back on something familiar. We don’t grow to love E.T. because he’s an extraterrestrial but because of his endearing disruption of Elliott’s familiar suburban routine. The same principle is at work in the film’s most memorable sequence—I can’t imagine a more perfect combination of the mundane and the fantastic than a flying bicycle.

Just ask the row of excitable youngsters who sat behind me at the Tennessee Theater screening. When the many E.T.s present in the film’s opening scene set their beating red hearts aglow for the first time, the kids gasped. When Elliot’s mother (Dee Wallace) nearly discovered E.T., a young voice whispered “No, no, no, no, no, no.” When it looked as though E.T. might not make it home, they debated how permanent his situation was. These kids weren’t just watching a movie. They were contemplating, discussing, and arguing with a film that came out 25 years before they were born. In that moment, for them, E.T. mattered.

I’d say that’s evidence that it will for a long time to come.