My lost photos: minor documents in the history of an underappreciated little street - The Knoxville Mercury 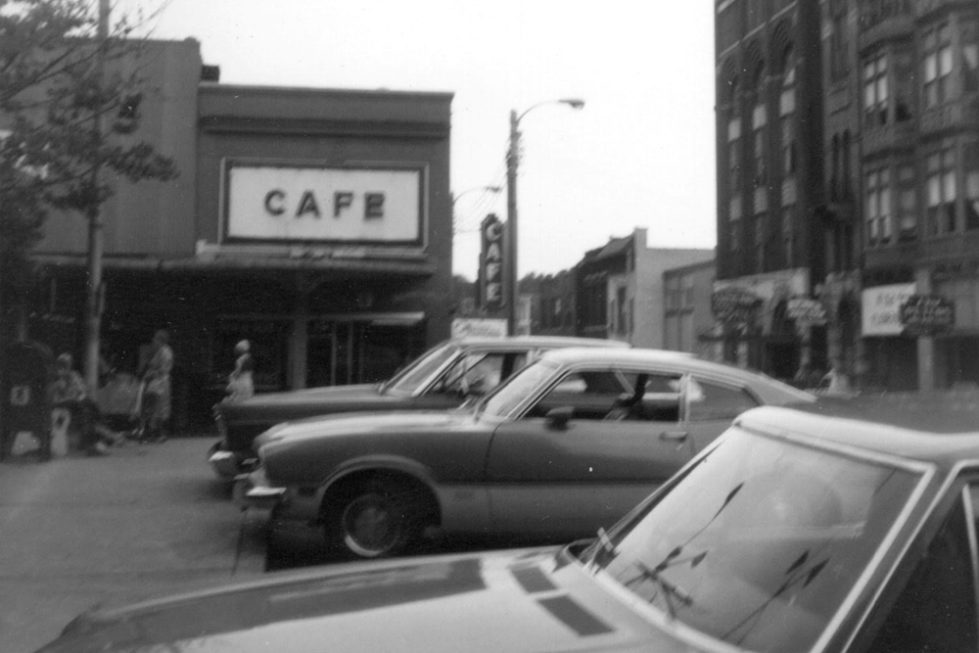 Wall Avenue is one of downtown’s shortest streets, a two-block, one-way jog from Gay Street to Walnut. In the middle of it are the steps to the Tennessee Valley Authority’s plaza and headquarters buildings, soon to be vacated by TVA. Today it’s the address of the TVA Credit Union, which is open only during bankers’ hours; the side entrance to one restaurant and the side patio of another; and a parking garage, now embellished with downtown’s only public toilets.

Most people know Wall Avenue mainly as pavement to cross, often between delivery trucks, on the way to or from Market Square.

Wall was briefly, before the Civil War, known as Market Street, when our Market Street was known as Prince Street. It was later known as Asylum Avenue, named for the fact that it led, in a crooked fashion, to the Deaf & Dumb Asylum, and beyond toward Mechanicsville. But this segment never seemed a logical part of Asylum, and got its own name.

The name Wall Avenue took its turn around 1892. I’m not sure what wall inspired the new name, but it was a practice in those New York-worshipping days to borrow names from Manhattan. Wall Street had long been one of America’s most famous streets.

By all those names, Knoxville’s Wall Avenue became one of the city’s most heavily developed urban streets, thanks to its adjacency to Market Square. There were two hotels on this little bit, including the St. James, which became most famous after its demolition as the location for some long-forgotten recording sessions there in 1929 and 1930, released just last year as The Knoxville Sessions—it used an urban Wall Avenue scene for its main cover.

Besides hotels, Wall hosted some major wholesaling firms, especially grocers, handy as they were to Market Square—and as many as 55 separate businesses at a time, of all sorts from bootblacks to butchers to barbers to bakers to boarding houses, plus doctors, dentists, a piano dealer, a dancing school, plus dozens of residences. It was even the address of Knoxville’s first City Hall and Chamber of Commerce, at the north end of the old Market Hall, torn down in 1960.

Downtown may continue to revive in the 21st century, but it’s hard to believe that Wall Avenue will ever be as busy as it was 100 years ago.

It left an interesting architectural legacy of mostly Victorian commercial buildings, each different from the next, some of them very elaborate. Wall Avenue fascinated me as a kid. In the early ’70s, I used to take the bus downtown with my lawn-mowing and paper-route earnings, and one of my regular stops was a rare-coin shop on Wall. It was on the south side of the street in a building that’s still there, part of what’s now the Market House Cafe, I think. But the other side was dingy and jumbled and fascinating to me.

In early 1973, I heard the whole fascinating north side of the block was going to be torn down for the amazing new TVA headquarters. It was during my brief infatuation with photography, and I took my ca. 1920 Brownie box camera, one of those you hold at waist level and look down into through the foggy mirrored viewfinder to choose your shot. I always chose carefully, because film and processing were expensive, or so they seemed to a kid who did yard work for a dollar an hour. Then I’d take the exposed rolls in to the drug store, and put them in an envelope, and a week or two later, I’d get to see them. It was the ’70s, but color film and processing was still much more expensive than black and white, and I could rarely afford it.

Anyway, I wrote about Union Avenue in the Mercury over a year ago, considering that TVA is planning to leave this location, and mentioned those photos, but didn’t know where they were at the time. Recently two of them turned up in a box at home. Not great pictures, taken by a ninth-grader with the simplest of cameras. But since I don’t know of many pictures of Wall Avenue when it still had old buildings on the north side, I thought I’d put them out there.

One of them is taken from the north end of Market Square, looking over toward the old Gold Sun Cafe (now Blue Coast Grill), which then had a simpler message. All the other buildings in the picture were about to be demolished. The building that fascinated me most was the old Stratford Hotel, with its almost bulbous bay windows over the sidewalk. Its elaborate architecture is not as obvious in this picture as I intended it to be. 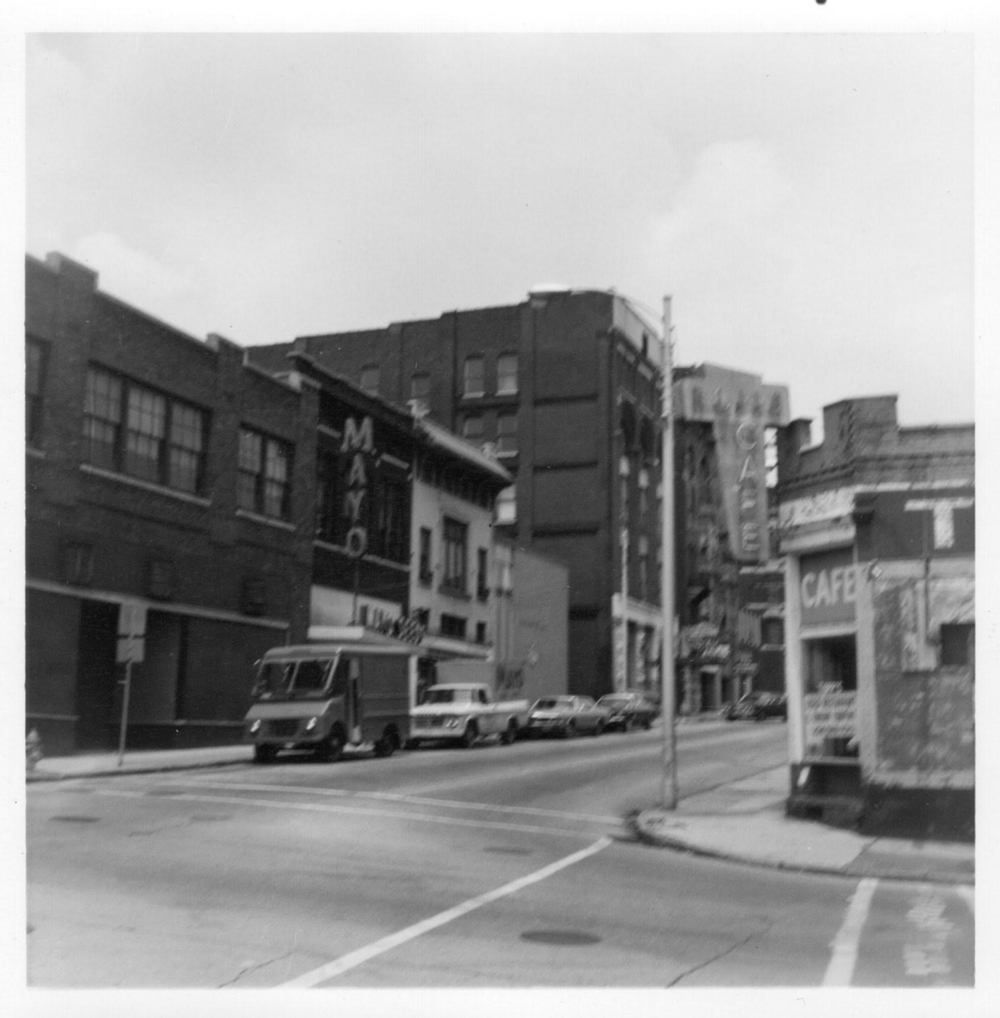 The other is taken from Walnut Street, looking northeast, showing Mayo’s Seeds’ longtime downtown location. I think most of these buildings were already empty, or headed that way, when I took these shots. I felt some urgency about recording the fact that these buildings existed. Strange to remember, Knoxville did not have a preservationist organization at the time—Knoxville Heritage, later Knox Heritage, was founded the following year, just in time to save the Bijou Theatre—and judging by newspaper articles of the time, these demolitions didn’t elicit any groundswell of public interest, though I do know a couple of adults who regretted their loss at the time. “Progress” was our favorite, and rarely challenged, euphemism for demolition, and everybody was excited about the new TVA headquarters, where, it was promised, 5,000 would someday work.

At the time, I probably couldn’t have defined the word preservationist. I just thought they were interesting buildings, and was sorry to see them go. There are probably better photographs of them out there somewhere, but these were mine.