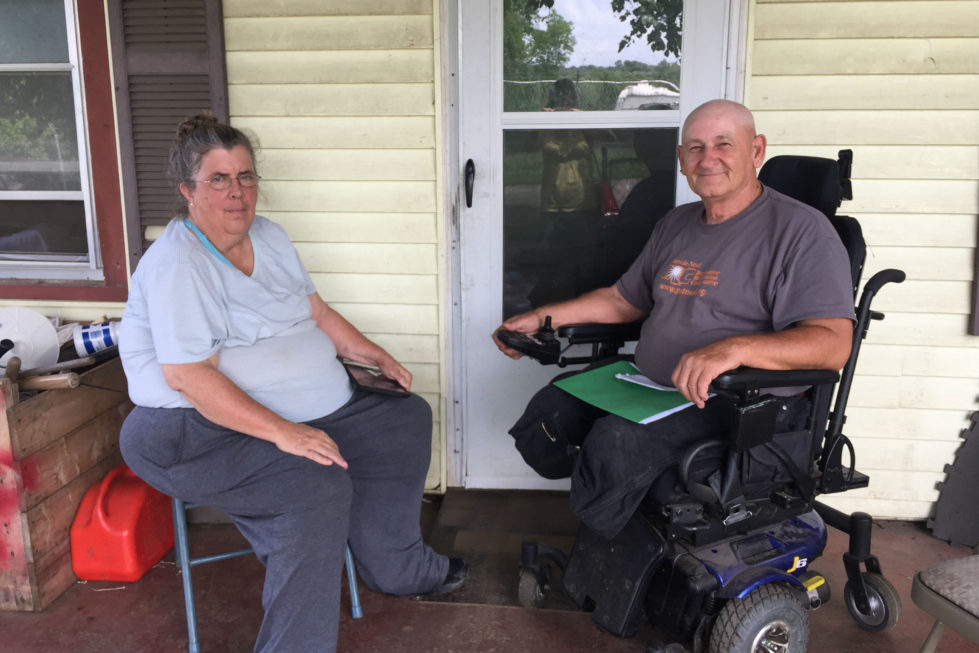 Tennessee health care and elder advocates say the state is illegitimately removing people from the Medical Savings Program it administers, causing hundreds—likely thousands—of elderly and disabled Tennesseans to lose part of the monthly Social Security payment they need to survive.

“This is a very serious problem we’re seeing across the state, with people who are finding out they are losing their benefits either from letters from Social Security or just a reduced check,” says Chris Coleman, an attorney with the Tennessee Justice Center, which uses lobbying, legal work, and individual assistance to pursue quality health care for the poor. “Because of TennCare’s mistake and just refusing to fix it, these people are losing a huge portion of their income.”

When Knoxville resident Thomas Radford opened the letter saying his Social Security payment would drop by more than $200 in June and by almost half in July, he was shocked and bewildered.

“I couldn’t believe it,” says Radford, a former Navy serviceman who lost both his legs to working conditions in a meat-packing plant. “It was like you’ve been shot and you don’t know it—and you look down and there’s the blood.”

The reason, he learned, was that he had failed to submit “redetermination” paperwork to TennCare, which pays the Medical Savings Program (Medicare Part B) premiums and co-pays for low-income residents. The state is supposed to verify annually that those who receive this benefit qualify financially. But due to the failed implementation of a computer system to manage the program, Tennessee hasn’t done this since about 2013, Coleman says. It has been trying to catch up, sending out packets with rolling deadlines for income verification. General TennCare enrollees received these last year, but Medical Savings Program recipients started getting them this spring.

The trouble is, Radford—like two elderly sisters who are his neighbors, and many more—says he never received that paperwork to start with. State TennCare officials have reportedly said the packets were mailed out. But advocates believe many never were.

“There has to be a systemic problem at TennCare,” says Coleman, who says his organization has been contacted by hundreds of people with the same story. Most have been living at the same address for years. “The numbers are just too big. They point to something other than just the mail didn’t show up,” he says.

In an email, Kelly Gunderson with Tenncare noted that program participants need to keep their addresses updated with the department. But if they think they have lost coverage in error they can appeal and, depending on when the state receives the paperwork, may be able to receive back payments.

In Knoxville, the Community Action Committee’s Office on Aging has fielded about 100 calls in the last month or so—double its normal monthly call volume—from elderly people who have lost their coverage or been notified of the impending loss without receiving the redetermination paperwork, says Peggy Ransom, who runs the Affordable Medical Options for Seniors program at CAC.

“There are just too many people reporting they didn’t get the packet to be accidental,” Ransom says.

“We are unaware of any ‘large number of seniors in Knoxville’ who did not receive their packets and who lost their coverage,” Gunderson wrote. “We are, therefore, very interested in (and would very much appreciate) any additional information or details you can provide us about this so that we can look into it further.”

The packet itself is very confusing, Ransom says—it’s about 100 pages long, goes back and forth between Spanish and English, and can only be rapidly resubmitted by fax. By definition, many of the people required to fill them out have disabilities or are very old.

“I had a mom, daughter, and niece all in here trying to fill theirs out and they tried to do it, but they had gotten the pages out of order and all mixed up among them,” Ransom says. Many elderly people give up when they get to the pages with Spanish, feeling overwhelmed, she says.

“Even those who understand and have a budget—without the Social Security, they can’t pay the rent,” Ransom says.

She’s trying to connect more of them with food stamps and the Low-Income Heat and Energy Assistance Program (also administered through CAC) for help with utility costs while they await re-verification. Ransom says she hopes the Knoxville Community Development Corporation, which houses many affected seniors, will be willing to cut them some slack on late rent for a few months.

Some who are affected receive notification from Social Security that their payments are about to change, as Radford was. Others only discover it when they receive their first reduced check. Coleman says none seem to have been notified by TennCare that their Medical Savings Program enrollment has ended.

Coleman says he has a client who was receiving about $500 in Social Security, and found out she’d lost her Medical Savings Program benefits only when a mere $36 Social Security check was deposited in her account. (She had to move in with her daughter, he says.)

In a double-whammy, the Social Security Administration took a while to process the change, and is in many cases trying to recoup three month’s worth of payments at once. For Radford, that means he’s supposed to get only $663 next month—not enough to pay rent, electricity, phone, and cremation bills, plus groceries. He says he’ll try to cut lawns on his riding mower for extra cash, but that requires money for mower oil and gas.

“It is a case of economic justice discrimination,” says Dawn Schneider, Radford’s next-door neighbor, who has been helping him try to unravel the mess.

To start with, people need to get copies of their redetermination packets so they can fill them out. Each person has a distinctive bar code, so it has to be mailed to them and can’t be copied. It also can’t be filled out online.

Ransom says residents are supposed to be able to get help with the process by calling Tennessee Health Connection, a contractor for the state that is supposed to provide customer service related to TennCare. But Coleman says wait times are often two to three hours, and even then, they can’t verify whether paperwork has been received, they don’t seem able to enter changed addresses in the system, and they give out information that contradicts what TennCare has said.

Radford stayed on hold several hours waiting to get help from Tennessee Health Connection before his call was dropped. So Schneider took him to CAC, then the state human services department, but no one could help. Then she called all the Knoxville-area state senators and representatives, finally getting help from Sen. Richard Briggs, who put her in touch with someone at TennCare who sent out a new packet.

But that was only the first difficulty. When the packet was filled out, it needed to be faxed in to meet a deadline after which the state would treat Radford as a new applicant, refusing to make the back payments he had lost. CAC would fax it, but emails show the TennCare official wouldn’t guarantee that it had arrived unless she received a copy of Radford’s fax verification. CAC’s machine didn’t provide one. Schneider took it to a bank, but because the bank encrypted its faxes, TennCare wouldn’t accept the fax.

At this point Schneider called Briggs back and he came in person, picked up the paperwork, and delivered it to the TennCare office in Nashville himself on Thursday, she says.

This whole process took about 20 days. In the meantime, Schneider and Radford visited two elderly sisters who are neighbors to check on whether they had received their packets. They hadn’t, and knew nothing about it. Now theirs are in the mail, says Schneider, who says she thinks the state is deliberately trying to reduce its Medical Savings Program expenses by dumping people his way.

Coleman says the Tennessee Justice Center filed an information request with TennCare and the state Attorney General’s office two weeks ago to find out how many people have been terminated from the Medical Savings Program, and how many of those were terminated for failing to return their paperwork. He says there has been no response.

To have a new Medical Savings Program “redetermination” packet sent or find out if you need one, call the Tennessee Health Connection: 855-259-0701

Seniors struggling with redetermination may be able to receive some assistance from the Knoxville-Knox County Community Action Committee at 865-524-2786 or from the State Health Insurance Assistance Program (TNSHIP) at 877-801-0044.