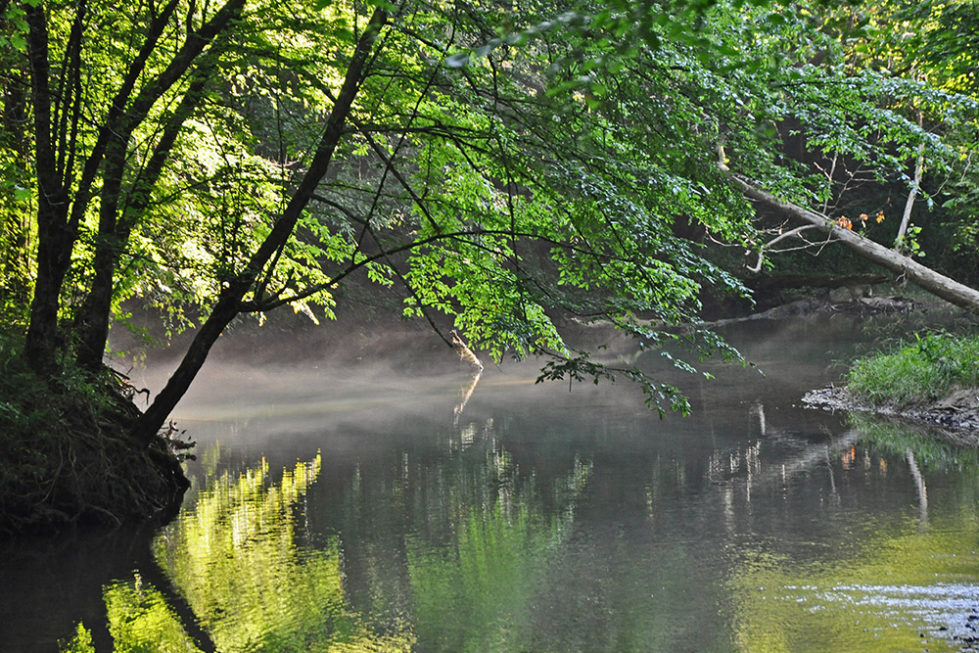 Drew Crain snored away in his hammock a few feet away from me, but that wasn’t what was keeping me awake 3 miles and 1,000 feet below the trailhead where my car was parked. Maybe it was the creature rustling the bushes a few feet behind my hammock, refusing to reveal itself to my searching head lamp. Maybe it was the other campsite a half-mile away with the two abandoned tents.

Without a doubt, the little cemetery 30 yards away contributed to my wakefulness. Resting there were members of the Clark family, one of them, Mary, born in the late 18th century. I’m not sure why the dates made the cemetery scarier, but they did, that and the fact that there was a barbed wire fence around it.

We’d descended to this place, far from cell phone coverage, on a quest to see the Walls of Jericho, a natural amphitheater at the southern end of the Cumberland Plateau, made known to me by Kim Pilarski-Hall, who speculates that a “one-legged ghost” from the cemetery stole one of her husband Rikki’s boots the night they camped there. It would be a night of vigilance and fitful dozing, as it usually is when I camp, but looking back, the trip to what the Nature Conservancy calls “the Grand Canyon of the Southeast,” was well worth the sleep deprivation and the long drive.

On the hike to our camp, we’d seen one pair of hikers coming out. From the Atlanta area, they were attempting to hike in 10 states during one week, and the Walls of Jericho enabled them to knock out two, one of its trailheads in Jackson County, Ala., and the amphitheater in Franklin County, Tenn.

After a couple of miles of descent through the lush forest, we paused at a primitive campsite with one fire ring, where the “Alabama trail” intersected with the trail that started from Tennessee. We then crossed 40-foot wide Mill Creek on a log bridge and traversed smaller Turkey Creek on another bridge. These two creeks constitute the headwaters of the Paint Rock River, a free-flowing tributary of the Tennessee, renowned for its biodiversity.

A few yards after crossing Turkey Creek, we reached the designated primitive campsite, about five fire rings made of stones.

Among other detritus, such as the empty 20-pack bag of Doritos, Funyuns, and salt-vinegar chips, a thoughtful camper had left us an unopened can of beef noodle soup on top of a stump.

Despite the trash, it was shady, the ground was flat, and it was imperative that we drop our overloaded backpacks here to complete the rest of the hike—about a mile—to the waterfalls and swimming hole at the amphitheater.

Our dispositions improved in this last mile, and the scenery got a lot more dramatic. It always amazes me to be driving along past flat fields of corn and soybeans and hay, and then be able to descend into a gash in the earth that seems a different planet, all shady and mysterious, with cold, cold water and ancient trees and rock.

The trail from our campsite to the pool followed Turkey Creek, its cobbled streambed mostly dry. Sheer sandstone walls, the source of an itinerant preacher’s name for this place, rose up on both sides to form a gorge maybe 500 yards wide. The trail got rugged and narrow on this last mile. The air cooled down 20 degrees, it seemed, as we descended to the amphitheater, where twin waterfalls splattered into an oval pool of clear water.

Hot and sticky from the hike in, I’d promised myself full immersion, but as soon as I walked in and my feet grew numb, I opted for the lesser-known cooling off technique that I call the head topper. You bend over and submerge the top of your head into the water. When you rise, you get the effect of a cold shower running down your torso with the extra bonus of having a unique upside-down perspective on the world.

Crain, a biologist at Maryville College, plucked a couple of crawdads from the pool and held them up for inspection. He speculated that the fishing wouldn’t be good here, even though the pool looked very deep against the dripping rock wall on the left side.

On the way out, we saw two young couples, maybe high school age. One boy said there was a series of falls above the pool. They were all wearing swimsuits.

We met another couple of boys, neatly dressed and clean cut, on their way to the amphitheater for the first time. When I tried to describe how far it was and what was there, one of them said, “Sick!”

We passed the abandoned tents next to the creek and could come up with no reasonable explanation why someone would leave in such an apparent hurry from such an ideal campsite, much nicer and less littered than ours, near Clarks Cemetery.

As we were starting our campfire around 7, the two couples went by on their way out, and the boys followed a while later. They were having a loud conversation. “I’d rather deal with the zombies in that graveyard than those two,” one of them said. Perhaps he was referring to Drew and me, grizzled professors panting in the heat and piling up kindling for a fire.

I was grateful for the campfire. It kept me occupied for much of the night. In the wee hours, after the sweat had dried on me and I got a little chilled, it kept me warm.

At some point, I unhooked my hammock, got into the tent and slept a couple of hours, fully shrouded in the hammock for warmth. (No, I did not pack a sleeping bag.)

Our alarm clock: what seemed like an army (only two!) of hammering woodpeckers that Crain identified by the speed and power of their pecking. One was pileated, the other red-bellied.

“How could you sleep here?” I asked him, but I knew from previous trips that he could sleep through anything, which was a problem because he held the bear spray and I always forgot mine.

He told me that he dreamed about somebody putting a hand around his throat, one of those dreams that you try to wake up from and can’t. Then I startled him with my headlamp, he said, and of course I denied ever having my headlamp on.

We got loaded up and hurried on out of there until the steep part slowed us down. A couple of hours later we staggered toward my car in the parking lot. The drive home would be around three hours.

If you don’t want to camp, you could do the hike in a day, approximately 6 miles round trip, with the hard part coming out. You can also arrange a shuttle, starting from the Tennessee trailhead and coming out at the Alabama trailhead, which would be a 7-mile hike.

Some recommend this as a spring or fall hike, when the weather’s cooler, the water’s higher, and the views more expansive because of the bare trees. Personally, I love descending from the baking, flat landscape to the cool, cave-like atmosphere of a gorge with a swimming hole at the end as a reward.

The Nature Conservancy, responsible for helping to preserve the area, calls this “one of the best day hikes of the Southeast.”

Getting there: Take I-24 West through Chattanooga and exit on TN 64 (Exit 127). Go toward Winchester and turn south on TN 16, which will take you 18 miles to the Alabama trailhead, which acknowledges the primitive campsites. We didn’t start at the Tennessee trailhead, about 2 miles north of the Alabama one, because the kiosk signage said there was no camping.

Corrected: A previous version of this story referred to granite walls—they are actually sandstone. 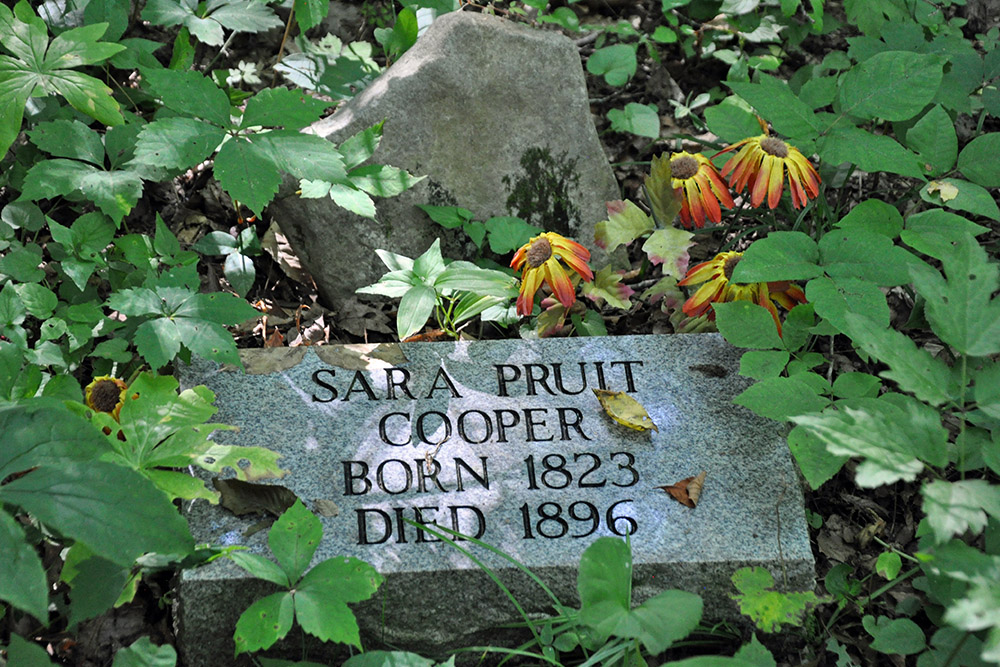