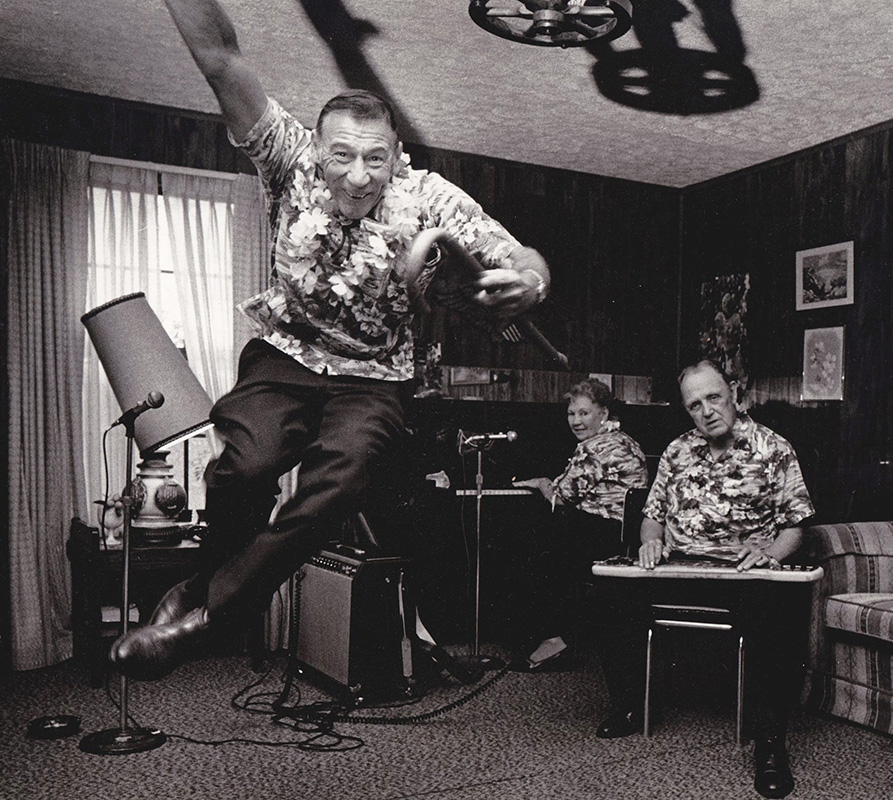 When the Tennessee Archive of Moving Image and Sound began collecting artifacts, photos, and documents that might be used in the book accompanying Bear Family’s Knoxville Sessions 1929-1930: Knoxville Stomp box set, one of our first stops was the Big Valley Music Barn in Norris. The Barn was opened by Carl Bean in 1974 as a venue for country and old-time music. Bean built the  30-by-80 foot structure himself, just off the Norris exit off Interstate 75, about 2 miles from the Museum of Appalachia. It took him two years to build it, but in the decades that followed the Barn has hosted countless local acts and touring groups, including Bill Monroe’s band.

Mack and Willie Sievers, who had recorded at the St. James Hotel in 1929 with their father, as the Tennessee Ramblers, often played there. Their family act continued into the 1980s as the Novelty Hawaiians, built on the Hawaiian music craze of the 1920s and ’30s. For a time, Bean was also a member of the band, and the Sievers often visited the Barn and recorded jam sessions with him and whoever happened to be around that day.

Bean died in 1997, while singing “I’m Using My Bible for a Roadmap” onstage at the Lenoir Museum at Norris Dam State Park. But the Barn, under new ownership, remained open. When we visited several years ago, the walls were still covered with pictures of the many musicians who had played there over the years, including some rare historic photos of the Ramblers.

Bean’s daughter Kathy allowed us to look through hundreds of photographs, newspaper articles, and letters. We borrowed a large cache for possible use in the Sessions book. Years earlier, Bean’s son Kenny had donated home movies, audiotapes, and acetates to TAMIS; the combined collections give a remarkable overview of Bean’s life and career, and also those of his friends and peers.

Bean was born in Norris in 1926, about a year and a half before the Ramblers recorded their first record in Ashland, Ky. He grew up among a community of musicians who would entertain each other on front porches and at churches and socials. Taught by his mother, he took up guitar at a young age, dividing his leisure time between making music and playing basketball. After serving in the military during World War II, Bean attended Carson-Newman College and then earned a master’s degree in education from the University of Tennessee. He coached basketball for several schools, retaining a position at Norris High School for 11 years before retiring to commit himself full-time to music and the Barn. His Norris team never had a losing season, and curiously, his 8mm home movies don’t have any footage of musicians, but there are several reels shot at the schools at which he taught.

In the late 1960s, Bean cut a record for Knoxville’s Valley Records, billing himself as “The Lost Indian,” a nod to his Native American heritage. Two more singles followed in the ’70s, released by Varsity Records, out of Nashville, who tried selling him as “The Singing Coach.”

Bean also played a brief but important role in local film history. He invited Mack and Willie Sievers to visit the Music Barn one day in the early 1980s. A film crew later showed up, accompanied by Howard Armstrong, whom the Sievers had last seen in 1929 at the St. James. Armstrong, Bean, and Willie can be seen playing together in Terry Zwigoff’s documentary Louie Bluie. Bean had one photo from that day, capturing Zwigoff standing on a chair holding a boom mic in the center of the musicians (including Mack, who wasn’t included in the film). I sent a scan of the photo to Zwigoff, who seemed amused by it and said that he had never seen it.

One of Bean’s mentors was the great old-time fiddler Bob Coxe. Several pictures of Coxe are in Bean’s collection, including a 1980s portrait taken at an Olan Mills studio that shows Coxe holding his fiddle, with a guitar propped up against a fake rail fence and a shaded creek serving as a backdrop. Bean also wrote a genealogy of Coxe’s first fiddle, which Bean later acquired and donated to the Museum of Appalachia. The neck of the fiddle had been broken over a chair by the previous owner’s wife, and Coxe solicited luthier George McNish to repair it. Bean also notes that Coxe was a trick fiddler who could play in 27 different positions.

In the last two decades of his life, Bean performed frequently at the Museum of Appalachia; the museum’s founder, John Rice Irwin, wrote Bean’s obituary for the Clinton Courier-News. The obit notes that Cormac McCarthy, after a visit to the museum, had written Irwin a letter inquiring about Bean. Bean also counted Lamar Alexander and Alex Haley as fans.

There doesn’t seem to be a photo of Bean in which he wasn’t smiling.