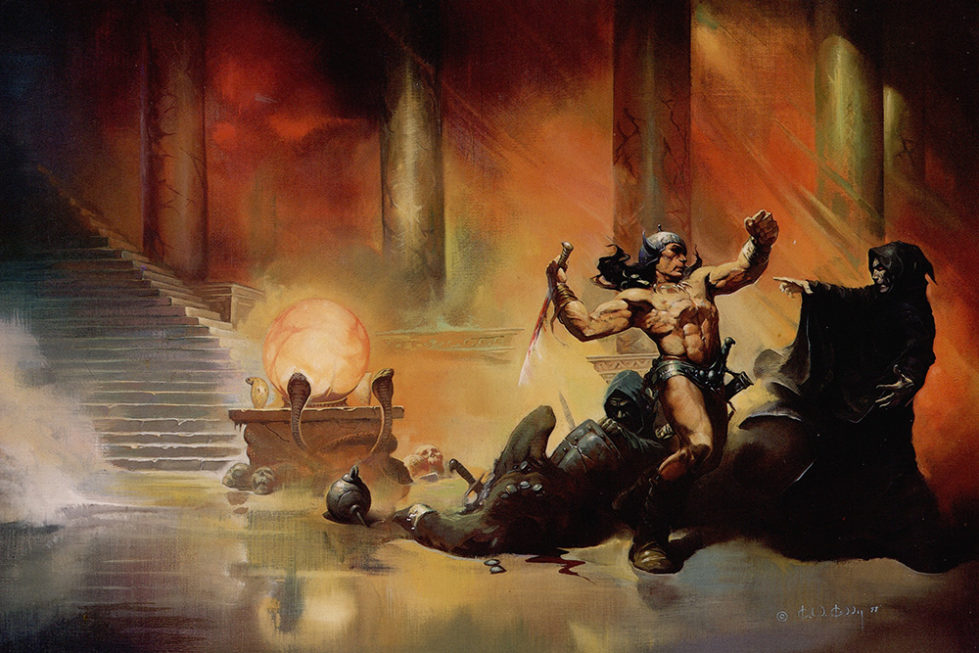 If you grew up in the 1970s, it’s likely you remember some of Ken Kelly’s paintings, even if you’ve never heard his name. The 71-year-old fantasy artist created the covers for the platinum Kiss albums Destroyer and Love Gun—two of the most iconic images from a band that has built four decades of success on memorable imagery. Kelly also painted hundreds of covers for the horror magazines Creepy and Eerie and illustrated book covers for legendary characters like Tarzan and Conan the Barbarian. Kelly may not have invented the style of heroic fantasy that he specialized in—pictures of berserkers with bulging muscles slaying hordes of their enemies, barely clad sorceresses and damsels in distress, ancient ruins shrouded in mystical fog—but he was as responsible as anyone else for making it mainstream during the 1970s and ’80s.

Actually, the man who deserves the most credit for inventing that style had a direct influence on Kelly. In the late ’60s, Kelly returned to the United States after four years in the Marines.

“I’m going, ‘What am I going to do with the rest of my life? Holy crap! You better think of something fast!’” he says.

He’d always liked to draw and paint, so he turned to his uncle, a professional commercial artist named Frank Frazetta. Frazetta’s early career had been in comics and newspaper strips, but by the mid ’60s he was gaining notoriety for his exuberant depictions of Tarzan, Conan, and other pulp characters from the ’20s and ’30s for cheap paperback reprints. He’s now a legend among fantasy fans; one of his Conan paintings sold in 2009 for $1 million.

“He’s immortal,” Kelly says. “As our generations die off and you give it 50 or 100 years, he then becomes one of those saints of the art world, like Michelangelo and Raphael, Frazetta will. The more distance you get from the actual product, if it’s that good—and his is—it holds its weight forever, and that’s the mark of genius.”

Having the Jack Kirby of fantasy illustration in the family turned out to be the first big break in Kelly’s career. He worked under Frazetta for five years and then went to work for Warren Publishing, a popular but not entirely reputable line of lurid horror and fantasy comics magazines.

“I was just working at Warren, not making a dime,” he says. “Then Kiss walks into your life and picks you for a cover and everything in your life changes.”

“They were trying to get Frazetta, but he was too expensive, much too expensive,” Kelly says. So the art director for Casablanca Records grabbed a bunch of magazines from the newsstand outside the company’s office for inspiration. “Gene Simmons happened to be there. I had a cover that I had done for one of the horror magazines—it was a little robot. Gene looks at them and lays his finger on that one. ‘That guy,’ he said. You can’t get more anonymous than I was, but it was because I had painted a sorrowful, sad look on the robot’s face after he had destroyed things, like he had a heart. There was an emotional quality to the cover.”

Destroyer was a breakthrough for both Kiss and Kelly, but he didn’t realize how big a deal it was until two years later, when he was hired to paint the cover for the band’s upcoming Love Gun album.

“I had no idea Destroyer had done double platinum,” he says. “I come into the city and I’m looking to go to the same address, but they’re now uptown in this absolutely golden palace. I’m just like, ‘Oh, wow, a lot has happened since the last time I was here.’ But I bought a house with the money I made with Kiss, so I’m happy. I got no regrets. It’s my best-selling product for 40 years.”

For the remainder of the ’70s and into the ’80s, Kelly was an in-demand artist for paperback publishers, heavy-metal bands, and toy manufacturers. He’s painted hundreds of muscled dudes with swords, hundreds of armored demons and snarling dragons, dozens of women in painted bikinis chained to crumbling pillars—and he’s never gotten tired of it.

“What I want to do is paint stuff that people like to look at,” Kelly says. “That’s the whole goal of any artist. Frank Frazetta told me, ‘You can paint the side of a barn, Ken, and if you paint it properly, it’s going to be beautiful.’ That means it’s all inside us. Any subject—fantasy, not-fantasy, toys, business products, whatever the hell it is, I’m going to try to make it look real good.”