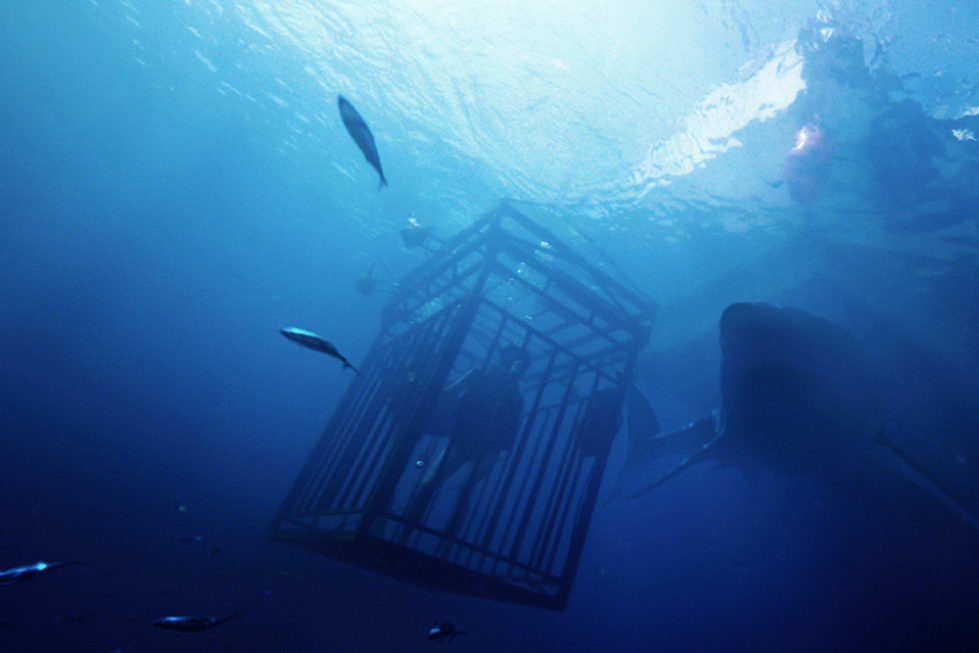 If we’re lucky, the summer movie season offers up at least one sturdy shark thriller that isn’t a Syfy-branded exercise in schlock. Last year it was The Shallows, a slickly produced and surprisingly clever survival yarn that pitted a surfer against a lone great white. This year it’s 47 Meters Down, a low-budget, claustrophobic shocker that finds a pair of sisters trapped in a shark cage while several of the toothy predators swarm around them. By no means will it join the ranks of such modern aquatic classics as Open Water—and let’s not even invoke the name of a certain hallowed shark movie in this review—but it’s still a moderately effective diversion that earns its theatrical release by dint of top-notch underwater photography, jolting jump scares, and a few tense, well-staged set pieces.

You’d be forgiven for wanting to jump ship during the mercifully short first act, which introduces straight-arrow Lisa (Mandy Moore) and her more adventurous kid sister, Kate (Claire Holt). The women are vacationing in Mexico, but it turns out that Kate is only there because Lisa has been dumped by her boyfriend, who couldn’t stand to spend one more minute in Lisa’s presence because she’s, like, so boring. What better way to prove him wrong than go on a discount shark-diving expedition from a dilapidated boat with some guys they meet at a beachfront bar? “Think of the photos!” Kate says, and soon they’re climbing aboard the rickety Sea Esta, piloted by Captain Taylor (an underused Matthew Modine, who seems to have wandered onto the set of the wrong movie and stuck around for the free muffins).

Needless to say, they’re going to need a bigger boat, or at least one that isn’t held together by Scotch tape and testosterone. The cage is rusted and the winch creaks ominously, but the scuba equipment, which includes full-face masks rigged with microphones so the women can communicate with each other underwater, is high-tech enough. So, after the guys complete a disaster-free dive, the sisters climb into the cage for their go.

Thing go horribly wrong, of course, and the cage plummets 47 meters to the ocean floor, trapping the sisters inside with a rapidly depleting oxygen supply. They happen to be just beyond the range of the ship’s radio system, which means one of them must leave the cage to communicate with Taylor. But they can’t just swim for it; in order to avoid a fatal bout of decompression sickness (“You will get the bends!”), they’d have to spend five minutes hovering at prime shark-attack depth as their systems even out or whatever.

Once the sisters are stranded underwater, the film trades its cable-movie vibe for something much more effective. Director Johannes Roberts orchestrates a series of increasingly tense sequences that find the women venturing farther and farther from the relative safety of the cage as it becomes clear that rescue will take longer than the 20 minutes of air in their tanks. (If it’s coming at all—Taylor and his one-man crew seem a little dodgy.) Cinematographer Mark Silk, a veteran underwater camera operator, shoots the action beautifully, and both the man-made underwater set and the CG sharks are convincing. Our familiarity with the rhythms and visual language of thrillers makes it increasingly tough to serve up scares, but Roberts manages an impressive number of jolts.

The biggest problem is that the script, written by Roberts and Ernest Riera, often undermines those scares with awful dialogue. “The shark almost got me!” is perhaps the most egregious offender, but the entire film is peppered with howlers as the sisters narrate the action to one another. The performances are more than serviceable—Moore in particular stands out—but I’m not sure there’s an actor alive who could sell some of the lines these women are burdened with.

But audiences will show up for 47 Meters Down for the shark action, not the nuanced character development and sparkling repartee. At a sleek 89 minutes, it delivers adequate thrills and at least a few memorable scares before the setup runs out of air, and Roberts’ direction is patient and measured enough to wring maximum tension from tasks as simple as fetching a flashlight or switching an air hose. It’s not likely to reach the minor cult-favorite status earned by The Shallows, but it’s a welcome antidote to the cynical cartoonishness of the Sharknado franchise and its ilk.