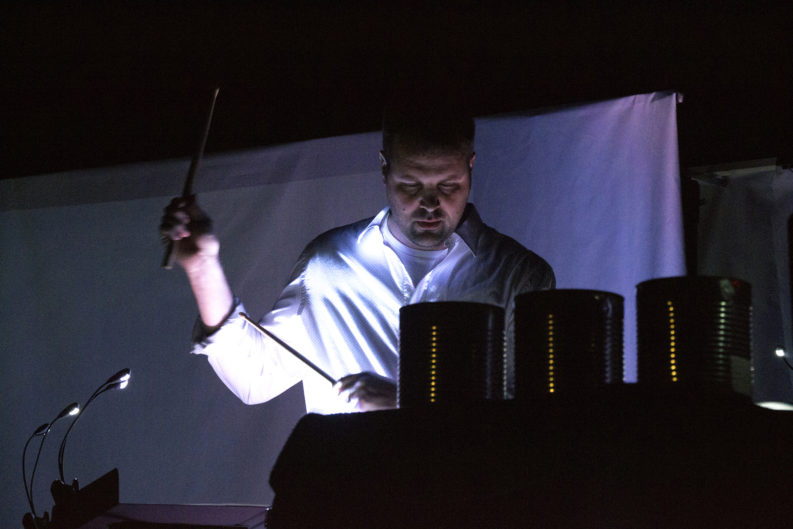 Over the last couple of years, the nief-norf Summer Festival has become one of the most significant events on the Knoxville cultural calendar. It’s a sophisticated summer camp on the campus of the University of Tennessee for undergraduate and graduate-level music students from around the United States, who come to immerse themselves for two weeks of close collaboration with working composers and scholars. The nief-norf fellows also present a series of public concerts during the festival, all with a focus on contemporary music.

The festival grew out of the nief-norf performance ensemble, a percussion group founded by Andy Bliss and Kerry O’Brien which has played at the last two Big Ears fests. Bliss and O’Brien established the festival in 2011, at Furman University in South Carolina. When Bliss came to the University of Tennessee—he’s now head of percussion studies at UT—the festival followed.

This 2017 festival, which started on Monday, runs through Sunday, June 25. There are 10 concerts, including one last night. This year, the festival also includes the Sixth International Conference of the Society for Minimalist Music, an international academic conference that attracts scholars from around the world.

“That’s always been at the crux of what we’re trying to do—trying to get performers, scholars, and composers to intersect and collide and work together in different ways and support each other,” Bliss says. “I’m primarily a performer, in terms of label, but most people we know read and like to learn, and if I had more time I’d love to do more scholarship and even more composing, even though it’s not something I spend a lot of my professional activity on. We all too often label people in one of these specific pools, when in reality a lot of people have at least a foot in all of those areas.

“The fellows who come here have never been to a paper reading, but that’s what people do at conferences. It’s a really new experience. They just haven’t seen that. So we always get a lot of feedback from our fellows that that’s one of the most powerful parts of the festival. They’ve spent a lot of time on stage playing this music, and now here’s someone talking about—that dialogue can be really fulfilling.”

Last week, I interviewed Bliss about this year’s festival. Here’s his day-by-day preview of the composers who will be here for the event, the music they’ll be playing, and what audiences can expect.

For more on nief-norf, read our 2016 cover story on the festival.

Thursday, June 15
UT Natalie L. Haslam Music Center • 7:30 p.m.
“In the first week, we’re doing nief-norf as people may have come to know it. It’s a wide variety of contemporary programming. We’re really excited to be featuring Nina Young, who won the Rome Prize for Composition last year, as a composer in residence. She’s a visiting professor at the Peabody Institute right now. She does a lot of really interesting work with electronics and live performers. This first week, we’ve for a piece of hers on every concert—the opening faculty concert on June 12, Monday, and then on Thursday, Friday, and Saturday we’re doing three pieces of hers, a piece for two pianos and two percussionists what was originally written for Yarn/Wire, who was here last fall, and then I’m conducting a newer piece of hers for a larger ensemble.

“Then each program is rounded out with some other people whose music we’ve been interested in, some of whom are quite young and some of whom are quite established. Looking at Thursday’s lineup, Anthony Vine is a young composer who I actually got turned onto by Yarn/Wire when they were here. He’s a doctoral student at the University of California at San Diego, which probably has the foremost program of contemporary music anywhere in the United States—their whole department is completely focused on contemporary music.

“George Aperghis is a long-standing citizen of contemporary music—his music has been around a really long time. He deals in theatrics quite a bit. This particular piece is a duo for two players speaking and doing all these gestures—they’re kind of acting out a play. It’s really funny and interesting, and tastefully done.”

Friday, June 16
UT Natalie L. Haslam Music Center • 7:30 p.m.
“I’m really excited about this Gérard Grisey piece we’re going to do on Friday night. It’s for quite a few players and has a lot of pitch-bending and these tones that are passing by each other. It’s a new piece to me, but I’m really looking forward to that.”

Saturday, June 17
UT Natalie L. Haslam Music Center • 7:30 p.m.
“And then Saturday, Carolyn Chen is coming. She has a lot of really, really interesting music—this percussion sextet called Hamlet that has never had a public premiere. There’s a video on YouTube of some folks at San Diego playing it, but it’s never been actually performed live. She informed me that this would be the world premiere. It’s about 30 minutes long, for six players—there’s a musical saw and vegetables and fighting robots, but also timpani and marimba.

“The score is really interesting-looking—each line is a player, but you can see that there are no beats in a traditional sense. She was our call for scores winner. So bleeding into week two, on Wednesday, we’re going to perform her piece Sentence, which was one of two pieces we selected this year for our call for scores.”

Tuesday, June 20
UT Natalie L. Haslam Music Center • 7:30 p.m.
“Every year we have the composer fellows who come here, so on Tuesday night is when all their pieces will get premiered. We have 11 fellows here this year.”

Wednesday, June 21
UT Natalie L. Haslam Music Center • 7:30 p.m.
“And on Wednesday we movie into the second full week, where the Sixth International Conference for the Society of Minimalist Music will be here. We’ll probably have 75-100 professional scholars from all over the world come to celebrate minimalist music. There will be papers going on during the day—typically we have a research summit, which is a weekend of scholarly work, but this is a full-blown four-day conference.

“Russell Hartenberger is coming as another keynote speaker/guest artist. He’s a longtime member of Steve Reich and Musicians; he’s in the Percussive Arts Society Hall of Fame, and is a member of Nexus, one of the first percussion ensembles in North America. He’s championed Reich’s music his entire career, alongside Reich. We’ll be playing Steve Reich’s new piece Quartet, for two vibraphones and two pianos. I’m playing that with Russell on vibes and our two pianists, Andrea Lodge and Christopher Adler.

“Christopher also directs our composition program, so we’ll be playing one of his works that night. Marc Mellits will be joining us for week two as the composer in residence.”

Thursday, June 22
The Standard • 7 p.m.
“Thursday night we go over to the Standard. This pianist friend of ours, R. Andrew Lee, will be coming in to play a multihour piece by Randy Gibson—I think it’s three and a half hours. Randy will also be doing live projections. It’s going to be a nice piece for people to drop in and enjoy for however long they’d like to.”

Friday, June 23
UT Natalie L. Haslam Music Center • 7:30 p.m.
“Friday we go back to UT and have more Mary Jane Leach and Julius Eastman stuff. Some of this music requires six pianos, so we’re doing it in the recital hall here, where we have access to all that equipment.”

Saturday, June 24
Ewing Gallery • 7:30 p.m.
“Saturday night, things really start to ramp up. Ellen Fullman is coming. She has been developing her long string instrument for 30 or more years.

“She’s going to be in town all week at the Ewing Gallery and we’re going to be featuring her there in concert with her collaborator, Theresa Wong, on cello. Fullman walks along these strings that she attaches over 80 feet—thy have a literal ton of force being put on them, and she tunes them and uses various techniques to get them to sound, and she’s running them through electronics and doing some really interesting things. She was originally trained as a visual artist. She’s been written up in The Wire—she has an international profile, so we’re really flattered to be able to host her.”

Sunday, June 25
The Mill and Mine • 2 p.m.
“Then Sunday, we’re going to the Mill and Mine to do our marathon concert. We’re going to do a little bit of Pauline Oliveros’ music. I’m directing a new piece by Michael Gordon. Louis Andriessen’s Workers Union is going to be part of that.

“Michael Pisaro, who people may remember us doing at Big Ears this year, we’re going to do another piece of his. Molly Joyce is a very young New York-based composer and we’re very excited to be able to do some of her music. Then we’re going to end with Drumming by Steve Reich.

“And we’re going to play Timber again, the Michael Gordon piece that kicked off Big Ears at the Mill and Mine.

“Each of those pieces is on the hour from 2 p.m. until approximately 11 o’clock. It’s an incredible venue—people can come in, go out and sit in the courtyard, pop out and get a sandwich and fresh ears and come back.

“This year, the whole second week is about minimalism, so in some ways it’s restrictive, in terms of our programming. In that way it’s kind of unorthodox for us—we’re definitely excited about it, but we try to champion all forms of contemporary music and not specialize in one niche. But minimalism and pulse-based music is the way Kerry and I got introduced to contemporary music, and it still holds a special place in our hearts.”