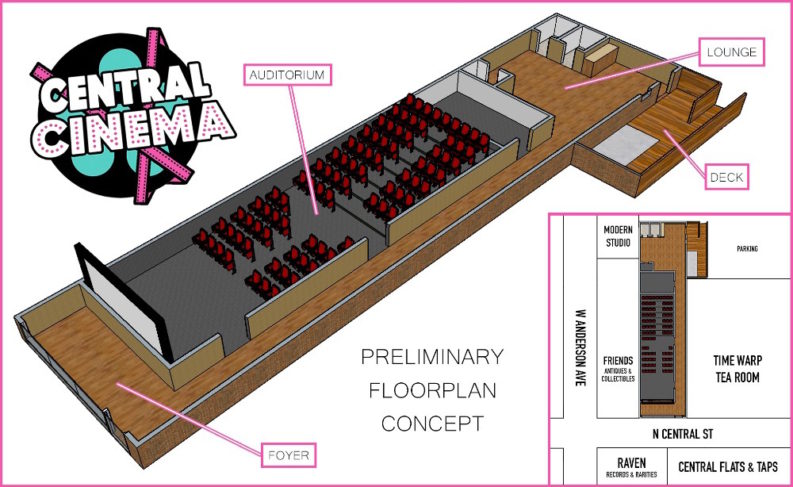 Last month, Coury Turczyn reported on plans for an independent repertory movie theater in Happy Holler—that is, a locally owned and locally programmed single-screen cinema showing classic movies and new releases that wouldn’t otherwise screen in the area. William Mahaffey and Nick Huinker are calling it Central Cinema, and they’ve officially launched a GoFundMe campaign and announced some details.

One of the most important of those details is the location: 1205 N. Central St., right in the heart of Happy Holler, between Anderson and Oklahoma avenues. The space is currently home to the Taoist Tai Chi Society, but between the 1910s and the 1950s, it was a movie theater, most notably the Joy Theater (1935-48).

“We believe a modest single-screen moviehouse could gain considerable traction in Knoxville’s leisure landscape, and that our chosen location in Happy Holler (just minutes north of downtown) puts us at the heart of a crucial spot in the exciting and organic redevelopment of Near North Knoxville,” reads the GoFundMe page.

Mahaffey and Huinker, who have run the Knoxville Horror Film Festival for the last nine years, say they hope to get Central Cinema operating by early 2018. (Huinker is also a regular Mercury contributor.) For Central Cinema’s weekend programming, they promise “edgy midnight movies, family matinees, themed film series, high-demand audience favorites, niche reissues or even creative counter-programming to current box office contenders” and “the sort of current-release independent, foreign and documentary films that might otherwise go un-shown in the area.” (They cite Nashville’s Belcourt Theatre and the Plaza Theatre in Atlanta as models.) Here’s a mocked-up ad suggesting a possible weekend schedule: 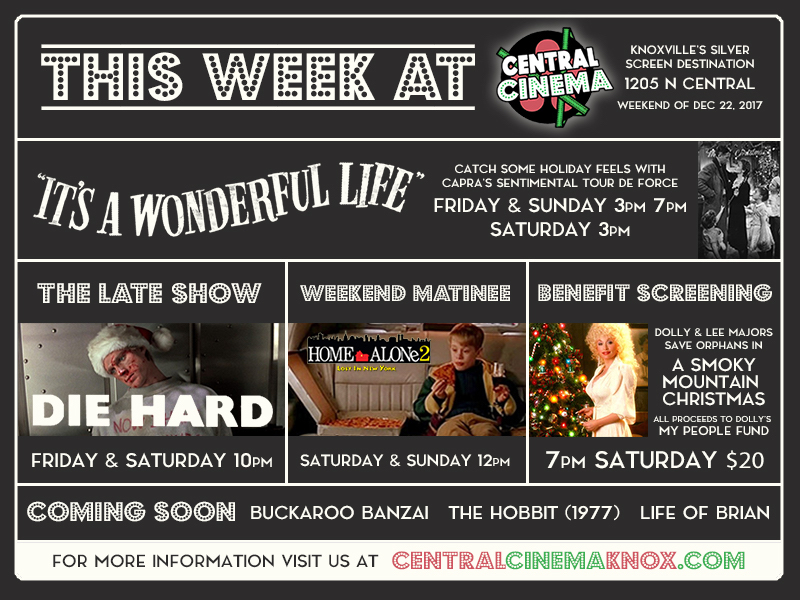 Current plans call for an 80-seat auditorium, which could be expanded. As film buffs, Mahaffey and Huinker say they’re committed to a premium experience—top-notch projection and audio, craft beer, competitive pricing, and popcorn with real butter. They’re also focused on community involvement, which means auditorium rentals during the week and partnered screenings. “This could be as simple as covering film rental fees in order to see a favorite film on the big screen, but we also plan to arrange screenings of more consequence, whether it’s a benefit event, the gala premiere of a self-produced film, or a chance for one of Knoxville’s minority communities to share in watching its life and culture reflected onscreen in a way the multiplex doesn’t offer.”

The Central Cinema project’s crowd-funding goal is $50,000—$5,000 for startup expenses, $10,000 for construction of the auditorium, $25,000 for a projection and sound system, and $10,000 to build amenities like bathrooms and a concession stand. There are a few incentives: $40 or more gets you on an email list for pre-opening screenings; $150 makes you a founding member, which will include discounts and access to VIP events; and for $1,000 you can be part of one of Central Cinema’s first partnered screenings. As of Monday morning, they’ve raised $1,220 from 17 donors.