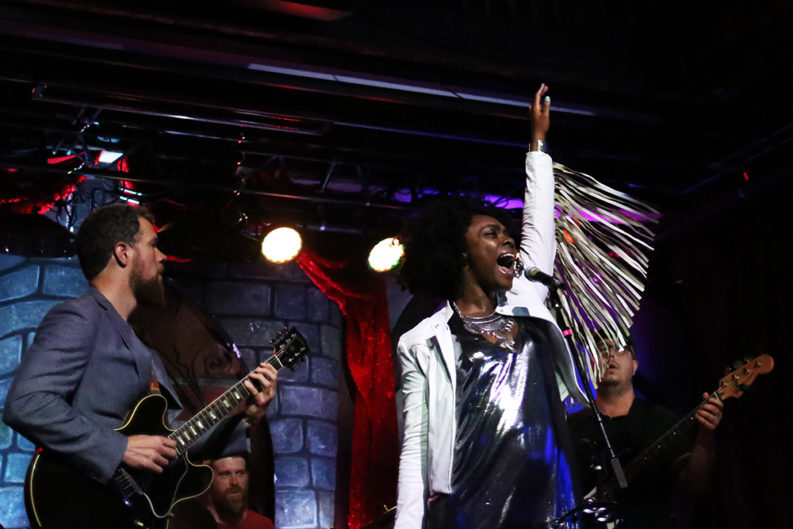 More coverage of Electric Darling: Read Mike Gibson’s December 2015 profile and a review of the band’s first show and listen to “Breaking Me Down” from the band’s new EP.

There wasn’t a single starting point for what eventually became Electric Darling, the local rock band led by two former members of the Dirty Guv’nahs that’s releasing its debut digital EP next week. A lot of things came together—the end of the Guv’nahs, a burgeoning songwriting partnership between ex-Guvs Cozmo Holloway and Kevin Hyfantis, a Sunday afternoon living-room reggae jam—to spark one of the most dynamic and promising bands produced by the Knoxville music scene in the last few years.

“It was all fairly mystical, the way we met,” Holloway says. “Because if none of that had timed itself just right, this wouldn’t have happened. For me, that was confirmation that we at least have to roll the dice on this. I had to at least try—if I looked back and hadn’t tried, I knew I was going to be extremely bitter.”

In the months before the Dirty Guv’nahs broke up in 2015, Holloway and Hyfantis had started writing songs together for the band’s planned next album. Neither had been an original member of the band, which helped them form a close bond during the Guv’nahs extensive road trips. After the Guv’nahs’ final tour, Hyfantis suggested that they keep working on that material.

“My plan was to just start contacting people and try to get a sideman gig with a bigger act—hop on the audition train,” Holloway says. “Kevin called me up one day and said, ‘What do you want to do? We’ve got all these songs—do you want to record them and push them? We’ve got a network, we’ve got people we can pitch them to.’

“We were just going to be a writing collective. Pretty soon we said, let’s start a band.”

In the meantime, Holloway had been part of a weekly reggae jam with Suttree’s High Gravity Tavern owner Matt Pacetti. One of the regulars was Yasameen Hoffman-Shahin, who turned out to be a key piece of the Electric Darling puzzle.

“It was just living-room jamming,” Holloway says. “This guys says, I know a singer and I’m going to bring her to the next rehearsal. He bring Yaz, and she destroys it—she’s dancing, it’s energetic. She crushed it.”

As soon as Hollow and Hyfantis’ partnership developed into plans for a full-fledged band, Hoffman-Shahin was invited to join them. “We said, what if we have a female singer?,” Holloway says. “And I was like, I’ve got one. I’ve got one. Immediately.”

Hoffman-Shahin had talent and training—she studied opera at the University of Tennessee—but no experience in front of an original band.

“At the time I was a hired hand,” she says. “I was singing in a million bands—five or six, maybe—but none of them was my thing. I was always playing a part that someone wanted me to play. … I was singing in a bunch of different jazz groups. I was the hype girl/backup singer for Lil Iffy for a while—that was definitely the weirdest thing I’ve ever done.”

Electric Darling got off to a quick start, but the band’s progress since then has been deliberate. The band—currently Hoffman-Shahin on lead vocals, Holloway (guitar), Hyfantis (guitar and vocals), Aaron Mastin (keyboards and vocals), and Garrit Tillman (drums)—has spent two full years refining their songs and finding their collective creative identity. And since last fall, they’ve been recording their seven-track self-titled EP at Scott Minor’s Wild Chorus studio. Electric Darling won’t surprise listeners familiar with the Dirty Guv’nahs, but the EP incorporates a wider range of influences and inspiration, adding funk and psychedelic rock to the Guv’nahs’ mix of classic rock and Americana.

“We developed a sound that’s specific to us, to our musicians,” Holloway says. “It’s 2017—sonically, everything’s been done. Let’s write something that’s truly us. You just don’t want to try to be something you’re not, so we really dug into that and found a collection of seven songs that we feel is a good representation of this first phase of our voice.”

“I wrote songs for myself, Hoffman-Shahin says. “I never used to play my songs out. This was practice in writing toward a sound. It’s one thing to write just for yourself, something that feels good, and another to write something you think other people might want to groove to, that other people might relate to. This has been a great exercise for me to step outside myself.

“But we still want to write songs that move us. If you can’t stand behind what you’re selling, there’s no point in doing it, right?”