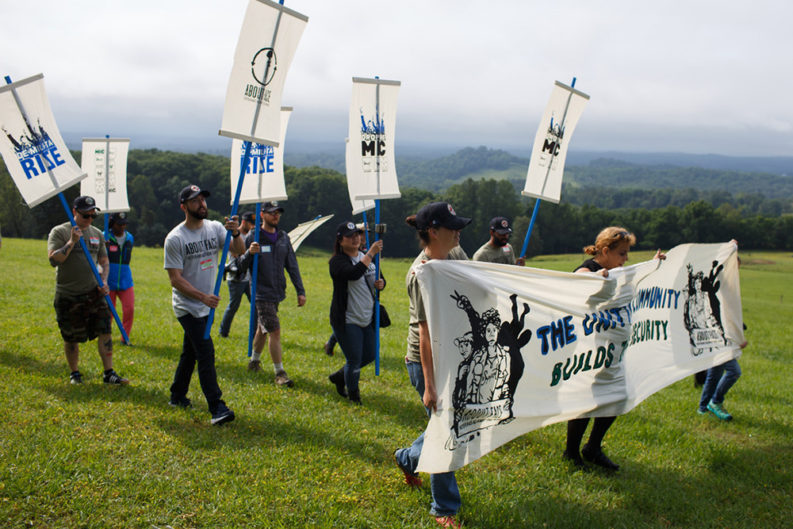 As fallen service members were honored on Memorial Day weekend, nearly 50 veterans and activists converged on the Highlander Research and Education Center in New Market. They were there to learn about a new kind of deployment—one that would send them to communities around the United States facing ICE raids, attacks on minorities, and police brutality.

At the five-day About Face Veterans Action Camp, veterans from all over the country learned how to apply the skills they had gained from their service to social and political action. Two organizations, Iraq Veterans Against the War and the Ruckus Society, joined forces to facilitate the training camp focused on nonviolent direct action. Matt Howard served two deployments in Iraq with the Marines between 2001 and 2006  and is now the co-director of the national Iraq Veterans Against the War. He says it’s important to draw a connection between violence in places like Ferguson, Mo., or Baltimore and the violence “that’s being waged on people in countries overseas.” Howard says the two organizations had discussed putting together a training camp in previous years, but two recent events made the effort more pressing than ever: mobilization against the Dakota Access Pipeline at Standing Rock, and the election of Donald Trump.

“[Trump’s] administration has only emboldened far-right reactionaries who really feel like they have the full backing of the state right now,” Howard says, citing the recent murders of Rick Best and Taliesin Myrddin Namkai-Meche by a white supremacist on a commuter train in Portland, Ore., as an example. “And our folks really understand the threat of that and the need to make sure that people are prepared to push back and really not let that be the new normal.”

And the Highlander Center —the historic hub for grassroots organizing and movement-building in the South, responsible for training activists like Rosa Parks and John Lewis—seemed like a fitting location for the action camp.

Over five days, participants in the camp took part in group discussions on nonviolence and community security, training workshops on nonviolent direct action, and skill-sharing. And they learned about one of four tracks in depth: strategy and action-planning, artistic and creative action, blockades, or community defense.

Will Griffin, who served as a paratrooper mechanic in the Army in both Iraq and Afghanistan, says he was drawn to participate in the camp because of its focus on direct action. In the current political climate, Griffin says, “conventional methods of trying to influence government or change policy aren’t working.”

For Griffin, veterans “redeploying” to support movements in places like Standing Rock is a natural extension of the mindset that led them to military service.

“We wanted to serve our country. We wanted to do some type of selfless service for the people that we love,” Griffin says. “And I think we’re still doing that. We’re just doing that in a way that we know for sure—and we’re not being misled—what we’re doing is not going to have a negative consequence such as the wars in Iraq and Afghanistan.”

In his experience in direct-action campaigns in South Korea, Palestine, Standing Rock, and beyond, Griffin says veterans in particular were trained to remain calm in very chaotic situations.

“I think that is imperative, because when police officers are pointing weapons and arresting people and most likely abusing people in some way, we can remain calm and make an actual assessment of the situation,” he says.

L.J. Amsterdam is a trainer at Ruckus Society, a grassroots network of organizers and artists based in Oakland, Calif. She led training on action strategy and planning at the camp . In this track, participants explored how skills from military service, like sand-tabling to plan out scenarios and using “battle buddies” to build relationships, could be applied outside of a military context to defend families from ICE raids or blockade an oil pipeline.

While certain aspects of the trainings, like translating terminology from a military to collective organizing context, presented challenges, Amsterdam says participants came away from the camp with a deeper understanding of how their skills could be used to support movement work.

“I think participants took away a sense of appreciation for their training and an understanding of how they might be able to use it differently,” Amsterdam says. “It was really important to me to create an environment that wasn’t shaming, that was inviting for people to work through uncomfortable experiences, and try to extract some of the useful elements of that.”

Amsterdam also notes that the participants of the camp were “awesomely diverse” in terms of region, race, ethnicity, gender, and cultural background.

Toward the end of the camp, participants ran a mock action campaign with the objective of disrupting a weapons expo to highlight relationships between weapons dealers and elected officials. The veterans planned their action, came up with goals, and developed messaging and art for their campaign.

Amsterdam says this experience provided a space to practice nonviolent strategies and de-escalation tactics and gain experience reacting to a high-stress situation.

For Howard, the camp provided an opportunity to better understand the kind of under-utilized skills that veterans bring to movement work—and what they might want to leave behind.

“We know that there are plenty of things that we’re not trying to bring with us if our goal is to demilitarize our community and also be doing the kind of change work to see the world that we want to see,” Howard says.