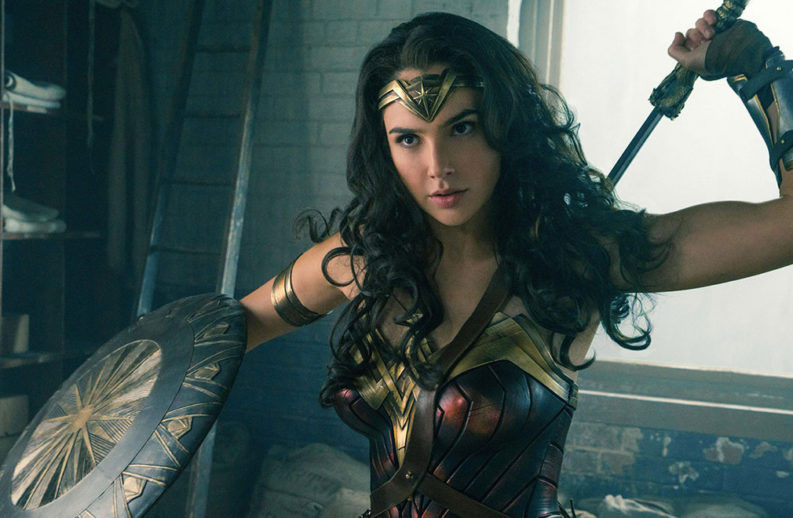 It’s one of the coolest origin stories in the history of comics: In the early ’40s, famed psychologist, lie detector co-inventor, and occasional Gillette razor spokesman William Moulton Marston was so disturbed by what he called the “blood-curdling masculinity” of superhero comics that he proposed a different sort of hero to publisher Max Gaines. Gaines, seeking to head off the brewing controversy that would eventually lead to the industry-gutting Comics Code Authority censorship panel of the following decade, gave Marston the go-ahead; Marston’s wife and the couple’s live-in girlfriend got involved, and Wonder Woman (née Suprema) was born. She wasn’t the first costumed heroine in comics, but she was certainly the first to capture readers’ imaginations and enjoy widespread popularity.

It’s taken 76 years for Wonder Woman to get her own feature film—Superman went from his first appearance in Action Comics #1 to his 1951 feature film debut in Superman and the Mole Men in only 13, if you’re keeping track of such things—and contrary to everything you might expect, given the recent track record of the DC Extended Universe, it’s worth the wait. Directed by Patty Jenkins and starring the born-for-the-role Gal Gadot, Wonder Woman doesn’t just get the DCEU back on track after three stunningly miscalculated efforts. Thanks to a genuine affection for its source material and a successful bid to co-opt the nimbleness that makes Marvel films so entertaining, Wonder Woman stands shoulder-to-shoulder with the finest superhero films ever made.

If that sounds like breathless praise from a breathless fangirl, it absolutely is. Like so many lady nerds of my generation, I’ve been waiting for this movie for most of my life. I all but bored myself into the ground doing the Lynda Carter twirl as a little girl, and I dared anyone to handle my Wonder Woman comics with anything less than the reverence they deserved. To my relief and delight, Jenkins, Gadot, and screenwriter Allan Heinberg get it. This isn’t a revisionist take on the character, or a Man of Steel-style attempt to strip her of the idealism and hopefulness that have defined her for so many decades.

After a short prologue that serves as a bridge from the events of Batman v Superman, Wonder Woman dials back the clock to a World War I-era origin story that picks up on Themyscira, the idyllic island home of an all-female warrior tribe known as the Amazons. The women spend most of their time training for an inevitable confrontation with war god Ares, who bears a grudge against the Amazons over their allegiance to his dad, Zeus. Princess Diana (played by Lilly Aspell as a young girl and Emily Carey as a teen) is under strict orders from Queen Hippolyta (Connie Nielsen) to leave the fighting to literally everyone else, but Diana’s aunt, Antiope (Robin Wright), has been secretly training her for combat. When a plane piloted by dashing American soldier Steve Trevor (an endlessly appealing Chris Pine) plummets into the ocean and Diana pulls him to safety, she finds herself caught up in the world of men—and the war she had no idea they were fighting.

While Zack Snyder’s films have been remarkably tone-deaf in their handling of Superman, Jenkins displays a nuanced understanding not just of her central character but also of the fan culture that has grown in her wake. Wonder Woman was conceived as an unabashedly feminist character, and the film embraces that legacy in a way that’s inspiring and rightfully empowering for girls and women. And while the script takes its central figure and her journey seriously, it’s not afraid to have fun with the setup or make some winking allusions to its creator’s famous quirks. When Diana gets her first glimpse of a naked man, she scoffs and says, “That tiny thing tells you what to do?” (She’s talking about his watch.) Later, when Steve is on his knees, surrounded by majestic female warriors, and bound by the Lasso of Truth, he gasps, “It’s really hot.” (Marston was a noted kinkster and bondage enthusiast.)

Time has somewhat tempered my opinion of Batman v Superman. I still think it’s a terrible movie—it’s overwrought, dull, silly, and ugly, both visually and thematically. But I’m less inclined to lay the failure entirely at Snyder’s door; after all, fans turned out in droves. For all its darkness and cynicism, maybe Snyder was simply giving us the superhero movie we deserved. But with Wonder Woman and its unfettered hope, levity, and compassion, Patty Jenkins has done something infinitely better: She’s given us the superhero movie we need.