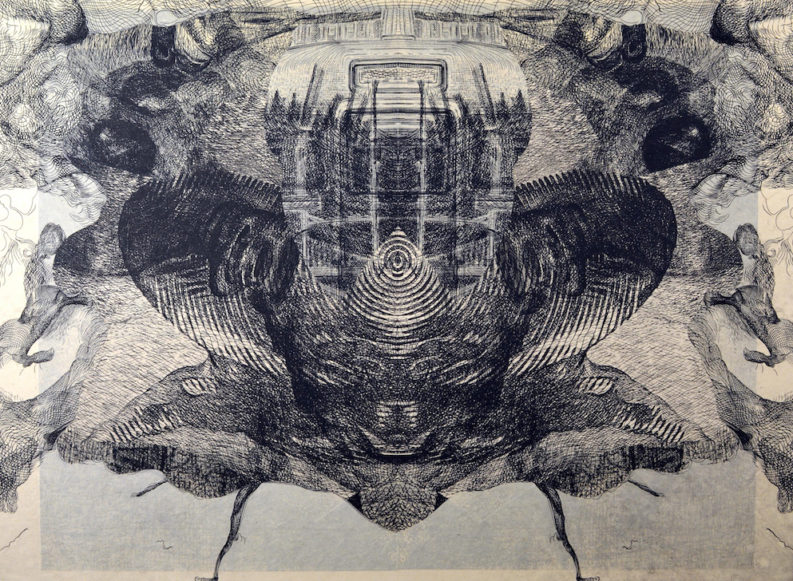 The University of Tennessee’s printmaking department is regularly rated as one of the three top departments in the country. It attracts and graduates people who have made a pronounced impact on both the international art world and other academic institutions. Who are the wizards who make all this happen? All three of the department’s professors got together to show a brief selection of their work at Maryville College’s Blackberry Farms Gallery, in the Clayton Center for the arts, this summer.

Beauvais Lyons has been working with the concept of witty deceit with his Hokes Archives for decades. He finds a narrative within which to promote specific ideas that just might possibly be true, but never are, such as a collection of outsider art put together by an art patron couple living in Loudon County. He then will produce all the work in the collection himself. Lyons’ work in Stone, Mesh, and Metal was from his popular Association of Creative Zoology series.

Lyons created hand-colored lithographs illustrating mutations that blend two known species, with a scientific name for each and Lyons’ own framed mock institutional signage. Each lithograph had the vintage feel of an 18th-century illustration from the volumes of French naturalist Georges Louis Leclerc de Buffon.

Each creature, formed by joining one real animal’s back end to another’s front end, is shown in its envisioned environment, with details that describe its diet and manner of reproduction. “Long-Tailed Marmot Heron” is depicted eating a snake; “American Badger Swallow” is seen swooping toward a large insect on the ground whose front legs are raised in a boxing pose. “Amazonian Lizard Hawk” is perched on the edge of its nest, which holds three eggs. Lyons’ work exposes how much of what humans accept as truth is nothing but nonsense others have made up though the millennia.

Althea Murphy-Price contemplates the power of hair as a signifier of cultural self-identity. Though outwardly absurd, the human species is profoundly judgmental about what grows on each other’s heads. Murphy-Price’s lithography and collage pieces “From Me to You” and “More, Please” showed long black lines that depict deceptively real-looking hair of various textures streaming down the picture plane. You almost want to touch it to make sure they actually are just the product of an inked plate. Brightly colored collage circles, representing Goody brand double-bead and elastic hair ties, were attached where the hair constricts. Murphy-Price’s photos “Goody Girl No. 1” and “Goody Girl No. 2” bring elastic and bead hair ties to a sculptural level. A small child was photographed from the back against a solid black background, her hair almost lost in a sea of hair ties that were as encompassing as a swim cap.

Koichi Yamamoto has been producing a large series of intaglio/chine-collé prints that are bonded onto wooden panels. The paper has about the same pale tan tone the wood has, so there is an illusion that they are printed on the wood. At first glance, the pieces appear to be a kind of steampunk Rorschach test. They are printed on paper that is refolded and printed again from the original print while still wet, which results in the symmetry associated with the classic psychological image tests. Then, the original print has a new print superimposed on top of it, creating a random but cohesive combination.

The end result of the experimentation creates the illusion of partial faces of unknown creatures intersected with landscape and machinery elements. The overlapping lines of the process itself create vibrations that give each piece a kind of mystical force. “Yotsumikan” is the most spare of the prints, with a flattened cartoon face on the bottom, weighed down with a similar shaped object resembling a machine part on top. In “Nosukiba,” Yamamoto takes the original double-shaped composition, adds an additional layer, and develops the idea to extreme complexity.

While this is a satisfying exhibit in itself, it only scratches the surface of what these artists will do when they have a solo exhibit. Both Lyons and Murphy-Price will take an entire gallery space and build intricate installations. Murphy-Price will use low platforms and sift bags of tiny hair clippings through stencils to create large prints on the level surface. Lyons has all the implements of a natural history museum on the road: roofed carts with shelves that he fills with jars of “specimens,” faux taxidermy, and additional “educational” prints. Yamamoto also does huge monoprints. It can be expected that summer academic exhibits will be on the light side, with most of the students and staff gone, but I don’t care—I still want more dimensions present.

Stone, Mesh, and Metal is on display at the Clayton Center for the Arts’ Blackberry Farms Gallery through Sept. 1. A reception will be held on Friday, Sept. 1, from 6 to 8 p.m.