The True Story of Knoxville's True Tones - The Knoxville Mercury 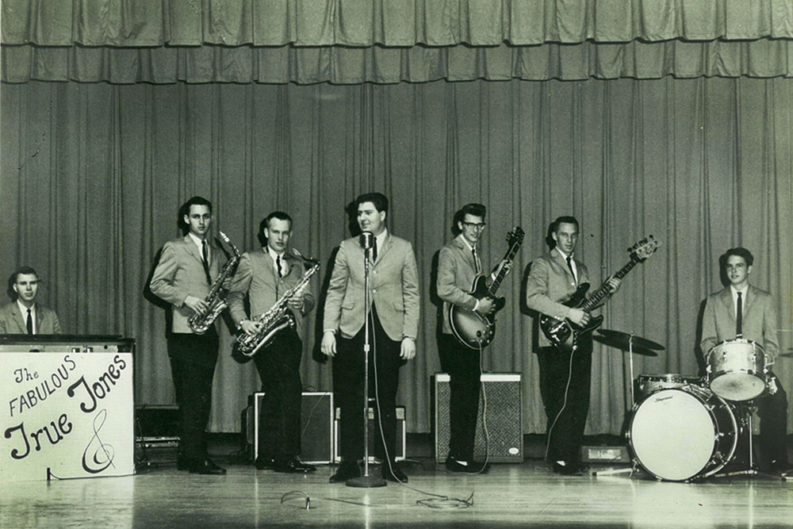 There’s a great single at the Tennessee Archive of Moving Image and Sound by a Knoxville band called the True Tones, released on Johnson City’s Spot Records in 1964. As is so often the case, scratch the surface of a local band and you’ll end up finding connections to multiple others, and digging for information on the True Tones led to some surprising places.

Guitarist Gerald Barber started the True Tones in 1961; his little sister, Ava, occasionally sang with the band before pursuing a successful solo career. They primarily played pop covers of the day, gaining popularity as the house band for WNOX’s Shower of Stars show at the station’s Whittle Springs studio and auditorium. In 1964 they recorded six sides for Spot Records, one of which proved to be more successful than they imagined. Guitarist Lanny Green says when the band finally had a chance to record, they spent all day working on the A side, “Never Had a Chance,” trying to get the harmonies and horns just right for the doo-wop-inspired number. They knocked out the upbeat flip side, “Lovin’ From My Baby,” in about an hour. That’s the song that would end up being a hit on Knoxville radio and even racking up airtime across the country.

The single’s success prompted a 1965 tour across the South and out west, an event rare enough for Knoxville bands at the time that it merited a notice in the News Sentinel. On the way back to Knoxville, about 50 miles outside of St. Louis, drummer Richard Way fell asleep behind the wheel of the group’s van. Way was thrown through the windshield in the ensuing wreck. Green, who was following the band in his Comet convertible, remembers finding Way at the side of the road covered in blood. He recovered, but most of the band’s equipment was damaged in the wreck, and that was the end of the True Tones.

In 1967, Green and Way joined the Sons and Lovers, with Corky McCorkle on vocals and guitar, Wilma Thress on vocals and bass, Nancy Westbrooks on vocals and piano, and Helen Westbrook on vocals and drums. The harmonizing group, which took its name from the D.H. Lawrence novel, owed more than a little bit to the Mamas and the Papas; they were a fairly popular act around town, covering hits like “Satisfaction,” “Remember (Walking in the Sand),” and “Monday, Monday.” They appeared frequently at the University of Tennessee and at country club events, including 1968’s Zodiac Ball at the Senators Club, playing “music of the spheres” alongside the Jerry Collins Orchestra and the Par-40s. The Sons and Lovers recorded a tape that was never officially released but can be heard on the website of Green’s current band, Heart and Soul.

Some members of Sons and Lovers found themselves in other bands that reflected both the folk craze and the Anglophilia so apparent in mid- to late-’60s pop culture. As part of the Oxford Collection, McCorkle and Helen Westbrook played at the House of Cambridge in Gatlinburg (“beside Magic Carpet Fun Slide on Parkway Just Above Stoplight 8,” according to a brochure).

McCorkle, who would open Pick N Grin music store on Kingston Pike in 1975, also joined up with the Town Criers, a folk act originating from Georgia Tech that gigged regularly on the college circuit throughout the 1960s. The Criers also had an annual summer residency in Gatlinburg, at Homespun Valley Mountaineer Village, near the Space Needle. They recorded a trio of singles and two albums; the second one, the live album Let’s Do It!, features McCorkle on guitar. The album has been uploaded to YouTube with the heading “Town Criers Vinyl Rip FUNK Psych FUZZ 70’s Bar Band Live Beatles,” and though most of the album is folky, the band does touch on each of those descriptors during their set. (They also manage covers of three Mason Williams “Them” poems.)

Wilma Thress would go on to co-found the all-woman band Body Shoppe, which seemed to have no trouble bookings shows around town. Members of the group would later form the 19th Amendment, another all-woman group that didn’t prove to be quite as in-demand. Thress would later lead her three children in Knoxville’s answer to the Partridge Family, the Generation Gap, perhaps best remembered for their Wolfe Dairy commercials. She also played bass for Gene Pike and Clifford Russell and the Martels for a time. These days she records music in her home studio with her husband, mostly original gospel numbers and songs like the decidedly non-Anglophilic “Make America Great Again.”