Norm: A final trek with a faithful outdoors companion - The Knoxville Mercury 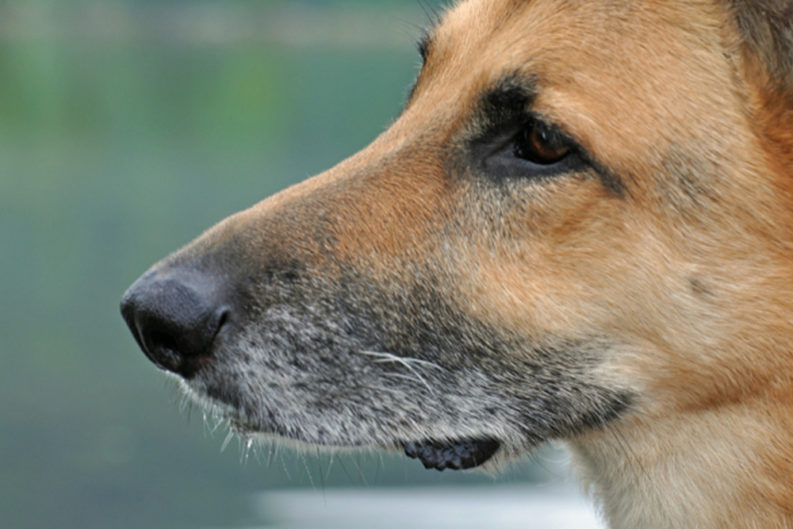 Not until we lose a pet do we fully realize how intimately they connect us to nature and the wild animal part that we share with them.

Norm, my dog, died just as he had lived: with dignity, grace, and an uncanny sensitivity to human foibles. He’d been gradually debilitated from neurological problems for the last couple of years but stoically endured the loss of mobility and control that came with it. He had a ramp on the front steps that he would scramble down (but not up), and he graciously accepted my help getting around.

Recently he stopped eating for a couple of days and lay on his side, refusing to get up. His eyes had lost their shine and focus, his breathing was labored, and it was clear he was ready to cross over, so I scheduled an appointment with the vet, who couldn’t come by until the next morning. The guilt that comes with the decision to euthanize a pet is agonizing, and I knew that last night with Norm would be a hard one for both of us.

That afternoon, I stayed with him out in the yard as much as I could, but I had to go into work for a couple of hours. When I returned, he’d died on his own, on his bed under the shade of a dogwood, relieving me of the next morning’s hard decision.

I’ve spent the last few days thinking of Norm stories. He’s made some appearances in this column and in much of my other writing about the outdoors.

Like me, he loved being on the water, but he didn’t like being in the water. He canoed with me in lakes and rivers all over the region, most notably at night a couple of times, once on Tellico up Four Mile Creek and another time on the cold deep waters of Calderwood Lake.

Norm didn’t bark a lot, but he would vocalize with clear urgency when he needed out of the boat and onto the bank for a break. Preferring not to swim gave him extra incentive for remaining calm and not tipping us over, which would have been an easy sabotage for a more anxious 80-pound German shepherd. 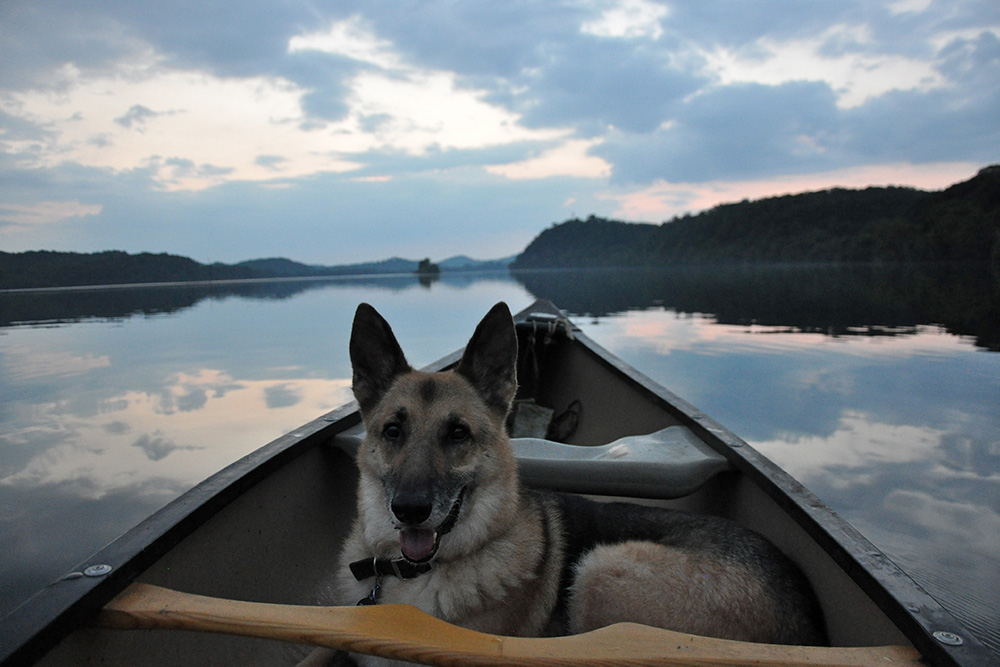 Norm came from humble, uncertain beginnings. My wife at the time, Julie, brought him home about eight years ago from an animal shelter. He was fully grown but malnourished and skittish. Having just lost a dog, Jasper, I let Julie know I wasn’t happy about the appearance of the coyote-like shepherd who wasted no time marking his territory indoors. Then I gave him some water, he licked my hand, and that was it.

He was gentle and loved people. When I walked him, he would always receive compliments about how pretty he was. He aged well and received these compliments with great humility right up until the end.

Other dogs he did not like. Once, while he was running up and down along the perimeter of our fenced-in yard, haranguing a Labradoodle that its owner held on a leash, seemingly taunting him, Norm knocked over a concrete dove statue onto one of his front feet and howled as if he had broken multiple bones. He limped on three legs and wouldn’t let us touch the injured foot.

Then, when he realized we had pulled into the pet emergency clinic parking lot, he jumped out of the car, putting full weight on the foot. We promptly put him back into the car and drove home.

Like the greatest dogs, Norm possessed an odd combination of civilized restraint and the wildness that he would indulge without inhibition or fear of reprimand.

Once, in Kentucky, at my family’s farm, I drew his attention to a deer, and he leapt out of the car and into a cornfield after it. The swaying corn tassels marked the path of his convoluted pursuit, which lasted a few hours. He would also chase cats into the corn, but as he grew older, he became indifferent to them and tolerant of most other dogs.

Norm had a late-life romance with my girlfriend Catherine’s dog, Shelly, a black Labrador. Once, Catherine brought over her daughter, Anna, 10, and 8-year-old son, Sam. Shelly accompanied them, and Norm, overcome with passion in spite of having been neutered long ago, became demonstrably amorous with Shelly in the brightly lit kitchen.

Catherine said that Norm was “doing what boy dogs do to girl dogs when they want to make baby dogs.” They were “grossed out” and didn’t want to hear any more.

Norm never did that sort of thing to humans, but he did have a unique way of showing his affection. He’d lean against your leg with the side of his head and wait there for a few seconds until you acknowledged his affection with a scratch behind his ear or a treat.

The wilder side of Norm didn’t like for humans to hug him and certainly not to pick him up. I think this was somehow beneath his dignity.

In spite of being in touch with his inner wildness, Norm was not immune to the temptations of technology. Once I came home at mid-morning, at an hour when he didn’t expect me, and he was on the couch (off limits) watching television on a channel I never watch. It could have been a question of his having sat down on the remote’s power button in a certain way. Or not. He looked surprised and somewhat annoyed at me for the interruption.

In his golden years, he helped me do a story on area dog parks, and surprised me by enjoying the company of other canines. When I left him for long periods out in the yard, untethered, he would toddle over to the neighbors’ and graze their mulch pile. One evening he drove me nuts crunching bits of egg shells for hours.

Until those last couple of days, he loved tennis balls, and he would catch them from 30 feet away or more if I launched a decent throw. He would puncture them after a short time.

I’d give anything to have that last night back to tempt him with a sirloin and roll a ball to him, but that wasn’t my decision to make, and I like to think that he went out on his own terms under the shade of the dogwood in the front yard on a brilliant May afternoon. 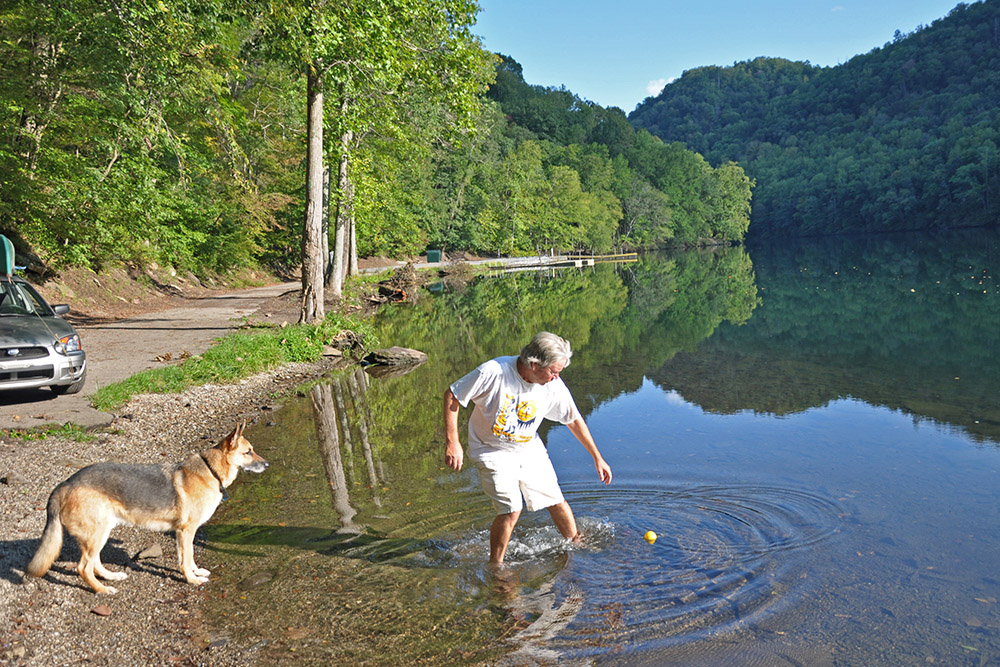 Norm made me retrieve his beloved Zoinks ball from frigid Calderwood Lake because he hated being in the water.