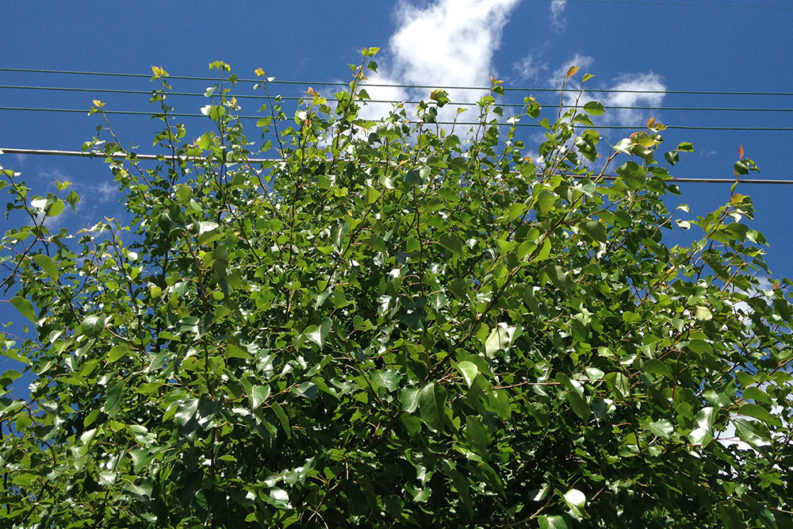 Eight years ago I received a tiny bare-rooted sapling from the Arbor Day Foundation.

“Crabapple,” the tag read,  “Beneficial to birds and wildlife.”

The small, sour, wild apple has a legacy as beneficial to humans too, a traditional medicine. Called wergulu in Old English, crabapple is listed among the nine sacred remedies for illness and infection in the ancient Anglo-Saxon incantation “Nine Herbs Charm.”

“This is the herb called wergulu
a seal sent this forth across the sea’s spine
for the harm of poison…”
(translated by Benjamin Slade, 2002).

The “Nine Herbs Charm,” written anonymously and collected in the 10th Century anthology Lacnunga [Remedies], includes instructions to sing it into the mouth of one afflicted while applying a salve made of the listed herbs. The most famous passage describes the pagan god Woden using the nine herbs to slay a dragon, a metaphor for disease.

“A worm came creeping, he tore a man in two.
Then Woden took 9 Glory-Twigs
struck the adder then, that it flew apart into 9 bits”
(Slade)

Wouldn’t it be lovely to grow a witchy medieval garden with a crabapple tree in the center, the other eight herbs: mugwort, plantain, lamb’s cress, nettle, betony, chamomile, chervil and fennel, growing at its base inside a circle of stones?

I planted my tiny crabapple in the backyard of my 4th and Gill apartment, and when I moved, I dug it up and took it with me. The tree thrived in the sunny corner where I replanted it. I sat on my porch and watched it through the seasons. The gray trunk grew thick, the shiny green leaves provided a buffer between the house and the busy intersection. The tree grew much taller than the listed height. Because the leaves were a bright green, and it was a shapely tree, I took family photos in front of it.

One warm winter day I pruned my crabapple tree. I lopped off a lower limb and began dragging it to the curb for organic waste pickup, and a thorn pricked me. I peeled off my glove and looked at the drop of blood welling from my finger tip.

What kind of crabapple has thorns? I thought.

There it was, a long cruel spike, growing from the limb I held in my hand. I turned to look at my tree. The sky was very blue that day, and the limbs were bare. They emerged from the trunk like a bouquet—a classic shape, but not for a crabapple.

Since my first botany classes in college I’ve made it my business to pull up, dig out, and exterminate invasive plants that strangle and smother: English ivy, bush honeysuckle, privet, and Callery pear, or its more well-known cultivar, the Bradford pear, a total garbage tree that any respectable conservationist wages undying war upon. These plants, imported from the Old World, have no natural predators here and so they metastasize and create monocultures, out-competing other varieties of plants on which wildlife depend, disrupting the ecosystem.

For eight years I looked at this tree every day. I nurtured it and prized it, and only saw it for what it was when it broke my skin and drew blood.

“You know, the Arbor Day Foundation is not the be-all, end-all for native trees,” said an arborist who heard my story. No, I did not know that.

Isn’t it true: You see what you want to see. You trust labels. You expect the promised thing to manifest.

In the Lacnunga is another famous charm, “Against a sudden stabbing pain,” poignant in its plea for the return of health and wholeness:

I once spoke to a farmer who had killed hundreds of chickens with her own hands, slipping the bird head-first into the killing cone, and slitting its throat with a knife. No big deal, they were raised to be meat. She also raised laying hens for eggs. She could not bring herself to dispatch one of “her girls,” a hen she had nurtured and protected, even when the hen’s laying days were done.

I should have gotten out my saw and gotten rid of the tree right then, without thinking about it too much, and poured poison on the stump so it wouldn’t come back. (Callery pears are known to re-sprout many shoots from a severed trunk, hydra-like.)

But I hesitated, and, months later, remain paralyzed.

It is hard to kill a thing you have loved, even when the thing is evil and deserves to die.