'Alien: Covenant' Can’t Escape the Xenomorphic Shadow of Its Progenitor - The Knoxville Mercury 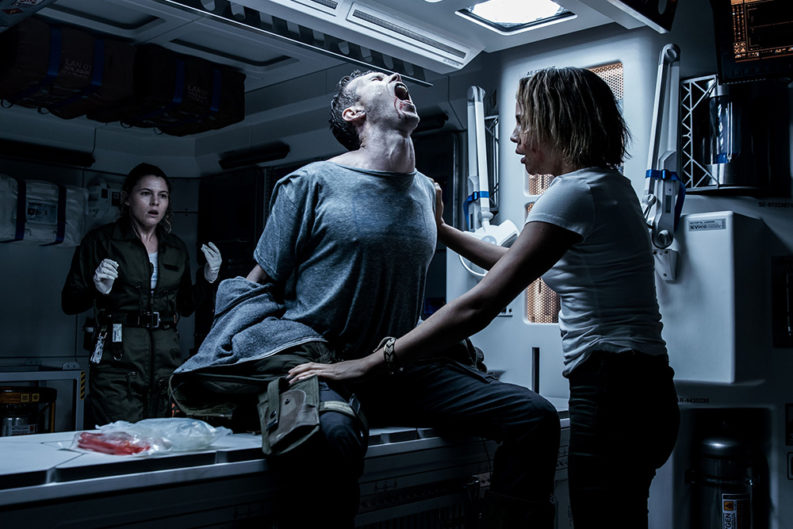 Here’s the unfortunate irony of monster movies: The better we get at realizing the most nightmarish creatures we can imagine, the less frightening they become. Visual effects are both boon and bane to modern horror films. No longer are our monsters forced to lurk in the shadows, but therein lies the rub: All that shadow-lurking business is part of what makes them scary in the first place. Shine too much light on them, literally or metaphorically, and they begin to lose their power.

The most cited example of this is Jaws, with the legendary technical issues that forced the shark offscreen for most of the movie—and made it immeasurably more terrifying. But director Ridley Scott and screenwriter Dan O’Bannon also benefited from budgetary and technical constraints with Alien in 1979. The monster’s chittering, gut-busting larval form is on full display, but its even more menacing adult iteration, with hulking, vaguely mechanical body and eyeless, phallic head, is often obscured by shadows and clouds of steam, and where it came from was anyone’s guess. For my money, it’s the most disturbing (non-human) monster ever put on screen.

The story and world-building, too, got mileage from mystery. So much of what is now recognized as the film’s iconography—the dead space jockey, the derelict craft, the egg chamber—was powerful because it existed outside of any attempt at explanation.

But that was almost 40 years ago, and mainstream audiences seem to be wired differently now, and our need for explanation borders on the pathological. That need has become a plot point in the Alien franchise, which dialed back its own clock in 2012 with the prequel Prometheus and continues to fill in backstory and demystify its monsters with Alien: Covenant. While it represents a return to the basic formula of Scott’s classic, Covenant can’t recapture the visceral thrills or skin-crawling horror of the first outing. But it’s an effective, tightly crafted, and often engaging thriller that should feel corrective to viewers who disliked the metaphysical bent of Prometheus. There’s still a lot of where-did-we-come-from pontification, but it’s firmly eclipsed by running, screaming, and sliding around on blood-slick floors. Oh, and it has a xenomorph.

When you reduce it to its most basic skeleton, Covenant is a pretty straightforward retread of Alien. It begins on a starship, massive by earthly standards but dwarfed by the gaping void of space. The Covenant and its crew are ferrying several thousand colonists, some in cryosleep and some still in embryo form, to Origae-6, a human-friendly planet where they will build outposts and, presumably, shag like crazy so that Origae-6 can one day be just as overpopulated as Earth.

Everything goes as planned until about two minutes after the opening titles, when a catastrophic something-or-other damages the ship and prompts its resident android, Walter (Michael Fassbender), to wake its crew from stasis. The ship’s captain, played by James Franco, is burned to death before he can utter a single line; this leaves his first mate, Oram (Billy Crudup), in charge, with the crispy captain’s grieving widow, Daniels (Katherine Waterston), as his often defiant second officer. When they decide to respond to a rogue transmission that beckons them to a mysterious planet—I sincerely hope the Weyland Corporation will one day update its employee manual with instructions to stop doing this—they quickly lose two crewmembers to a malevolent life form. What follows is a fast-paced exercise in cinematic chaos as they try to escape the planet, only to freak out, dramatically bungle every attempt, and constantly whittle down their own chances of survival. Why not? It’s what I would do.

The biggest problem is that Covenant doesn’t expend much effort to sketch out these characters before they make their inevitable, gory exits. There’s one clever conceit: Since everyone on the ship is a colonist by default, the crew consists entirely of married couples. It’s a shortcut to making us care about them, but it’s often not clear who is paired with whom until one of them becomes an alien dispenser. With the notable exceptions of Waterston’s grief-stricken Ripley stand-in and Danny McBride as redneck pilot Tennessee, none of the crew’s human members stand out. So in terms of character development, it’s robots to the rescue in the form of Fassbender’s dual roles as the loyal, unimaginative Walter and David, a “synthetic” who has bigger ideas about his place in the universe. How David (a holdover from Prometheus) enters the story is a plot point best left unspoiled.

These days, new installments in long-running franchises aren’t so much continuations of the story as best-of compilations of the entries that came before. Covenant is no different. It loses steam as it turns into a blatant Alien remake, but, largely thanks to the weird relationship that evolves between David and Walter, it takes some interesting detours as it gets there.