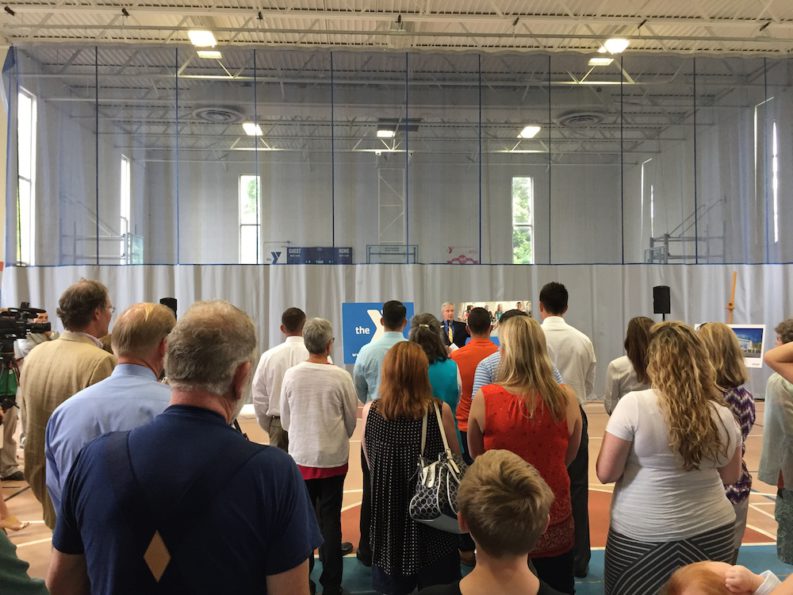 “Our purpose is deeper than a pool.”

A poster proudly displaying those words served as the backdrop for YMCA of East Tennessee President and CEO Jim Dickson this afternoon as he announced the organization’s latest venture: the installation of an indoor aquatics center and other improvements at Knoxville’s West Side Family Y. According to the event press release, West Side is the most popular of the five YMCA locations in Knoxville, serving more than 10,000 members.

The project, whose ultimate success is contingent upon a capital campaign that was also announced today, is the result of the Y’s collaboration with Tennessee Aquatics—formerly Pilot Aquatics—and marks the first time that the two organizations have worked together.

“Really, the guy who got us together was Will Haslam, the Director of Giving for Pilot/Flying J,” said Tennessee Aquatics CEO Marshall Goldman, who also spoke at the event. “At lunch one day, he suggested that I get in touch with Jim [Dickson]. We don’t have a good indoor space out west, and this project gives us the opportunity to change that.”

Improvements to the West Side Y, designed by architect David Collins of McCarty Holsaple McCarty, include the construction of a 29,000-square-foot indoor aquatics center on the current site of the center’s pool, extensive renovation of the main building, and the addition of more than 85 parking spaces to relieve the center’s perpetually full lot.

“I’m sure all of you who drove here today can attest to the fact that we need more parking,” Dickson joked.

Through this project, both the Y and Tennessee Aquatics intend to make good on their shared conviction that everyone should have the opportunity to swim. In his remarks, Goldman noted that a world-class aquatics center would further the goals of both organizations: the YMCA, which focuses on teaching children how to swim, and Tennessee Aquatics, which strives to give adults access to quality swimming facilities.

“What we have here is the opportunity to foster a love of swimming across someone’s entire life. Someone can be six months old and keep coming until they’re 85,” Goldman said. 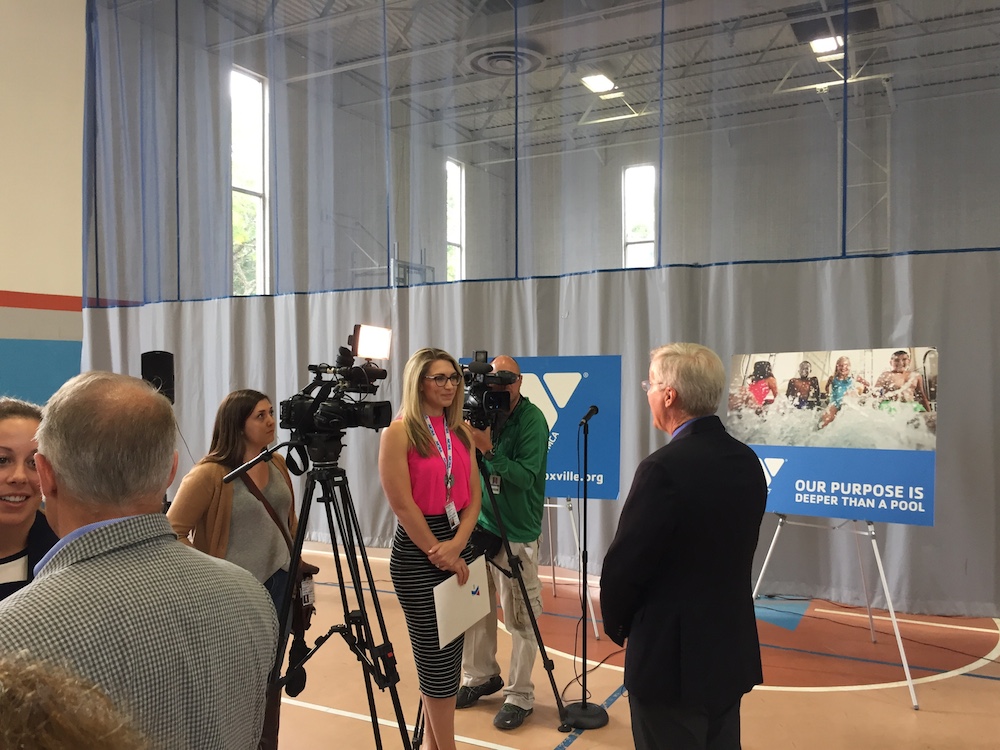 YMCA CEO Jim Dickson being interviewed by WVLT reporter Brittany Tarwater after his announcement of a new capital campaign.

Tennessee Aquatics also hopes to further its mission to give young adults with competitive swimming aspirations the chance to do so. There to attest to the value of that mission was Molly Hannis, a member of the 2016 U.S. Olympic Swim Team. She told the story of one of her childhood friends, a man named Garrett, whose involvement in competitive swimming helped him deal with depression. “I hope that these new facilities can mean the start of more of these stories,” she said.

The total cost of the renovation is $8 million, a sum that the Y and Tennessee Aquatics hope to raise through a capital campaign. At present, they have raised $2.5 million, the bulk of which has been provided by a $2 million donation from Pilot/Flying J, publically presented by company representative David Colquitt Jr. this afternoon. According to the press release, the Y only plans to build as much as they can pay for, so the success of the campaign is essential to the success of the project.

“What I find most exciting about this project is the opportunity to serve the greater community,” said YMCA East Tennessee COO Kim Ballard. “With these new facilities, we can reach out to more people, which is always our goal.”