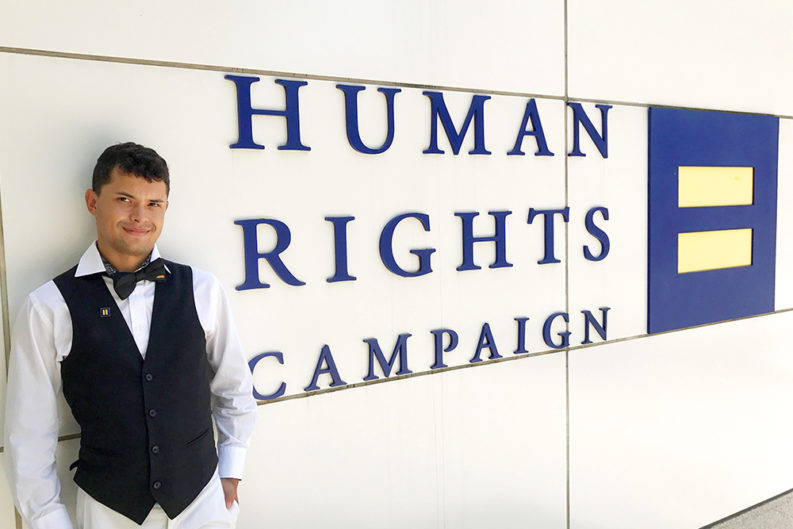 About an hour before the story hit news media that Gov. Bill Haslam had signed SB1085/HB1111 into law May 5—requiring undefined words like “mother” and “father” be given “their natural and ordinary meaning” in courts—Roddy Biggs was already pasting the word all over his Facebook page. His goal was to let people know how to reach the Tennessee Equality Project if they became victims of discrimination due to the law, which its foes call “the LGBT erasure bill.”

This was a week after he had returned from being honored in Washington, D.C. as one of 16 national Youth Ambassadors for the Human Rights Campaign, a day before he spoke at the Knoxville Youth Pride Fest, and a week before he’ll chaperone the area’s Diversity Prom.

Pretty impressive for a guy who just a few years back felt absolutely useless—didn’t want to kill himself, but didn’t really care if he died, either. Because he is gay.

“When I was 13 or 14, fellow students and even some family told, that I would never amount to anything, that I was worthless and should just go die,” he remembers.

Back then, Biggs would self harm, cutting. He’d sit by himself at lunch. “I never wanted to die—that was never my intent—but I did some things that could have resulted in my death,” he admits. “And during this dark time, I pushed away so many people and isolated myself. I didn’t want help and I wasn’t willing to receive it.”

Now 23, the West High School grad is earning an associate’s degree at Pellissippi State Community College with plans to continue his education, has a steady boyfriend, and could envision one day being a lobbyist for civil rights issues.

He is glad to still be alive, a firm believer in the motto, “It does get better.”

“When I was finally able to see forward, I realized people were there to help me, and I took the help,” he says. “That is why I am here today.”

By telling his story over and over, he hopes to catch anyone who feels the way he once did. “I want them to know, ‘You are not alone,’” he says. “There are people who have the same thoughts and feelings you do. Things do eventually get better. It may not be immediate or overnight, but things will improve.”

Biggs also tries to relay another concept that he knows from experience is difficult for a teen in a dark place to accept: There is always someone who cares.

“You do matter,” he says. “Someone out there loves you and cares about you no matter what. You may not know the person; they may not know you. But someone cares about your safety and well-being. If something were to happen to you, that person will hear about it and feel pain.”

Someone who was a battered and isolated teen becomes a prominent spokesperson. He goes from feeling utterly useless to ignoring the ones who tell him he’s embarrassing, or wrong.

“Like Lady Gaga says, ‘Baby I was born this way,’” he says. “I have learned to embrace who I am.”

How does this transformation take place? Even Biggs isn’t sure. He says that instead of being a single “ah-ha” moment, it was a hundred small things. “After being beaten down so many times, I would stand up to this or that,” he remembers. “And then I’d get beaten down again. It was a repetitive motion. I’d win something. I’d lose everything again.”

Slowly, it started to sink in: “I started thinking, ‘I’m not the only one this is happening to. I’ve got to show what’s happening to me in hopes that it won’t happen to others.”

The torment started early, Biggs remembers, even before he came out at age 12. “I didn’t know what was going on with me yet in fifth grade, but I was already being rejected for it, isolated on the playground,” he says.

He realized he was gay in middle school, but hadn’t told anyone. Then, the taunts were verbal: ”He’s so gay,” and “He’s such a fag,” The bullying ramped up going into high school, with people knocking books out of Biggs’ hands, writing “fag” on his locker, or beating him up in the hall.

The aggression went way beyond shoving, says Biggs. “I was walking down the hall and a guy came up behind me, grabbed me, threw me against the wall and began punching me. I got a black eye, a broken rib. I was lying there, crying, couldn’t move.”

At some point, Biggs blacked out. “I know that happened, and I can see it, but one of my defense mechanisms was being able to retreat, to literally black out.”

But beyond that, at ages 13 and 14, he says he didn’t know what to do. The darkness was overwhelming. He thought his current reality would always be the reality. “My 14-year-old self just thought, ‘This is who I am and this is what I have to go through because of who I am.’”

Somehow, he never considered giving up on school, always showing, even on the days when the thought of walking in the building made him break down in tears. “I didn’t know all I know now, but I knew I had a right to an education. As an American, I wasn’t going to let anyone deprive me of that.”

He attended high school all four years, including the year there was always something waiting for him in his locker. “I received death notes on a daily basis for a long time,” he remembers. “But it was one of those things. I may be freaked out, broken on the inside, but there are still daily things I have to do.” 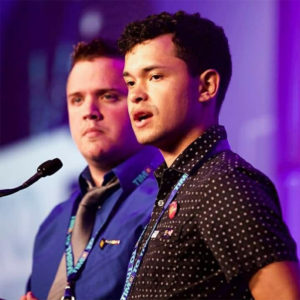 Roddy Biggs spoke with other Youth Ambassadors at the HRC Foundation’s Time to THRIVE Conference in April.

In some ways, his call to be a spokesperson for LGBTQ safety and civil rights is a natural fit, he says. “It didn’t come out of nowhere—from a very young age I’ve always been able to talk and react and have opinions on things; to be outspoken and command the space,” he says. “I still have the same personality.”

He simply accepts that part of being a successful advocate means putting his own life on display. “So I do. I tell what I’ve gone through, what I’ve noticed, what I think needs to happen. And then I go away.”

He’s not expecting everyone to agree with his viewpoints, not even within the LGBTQ community and certainly not in the general population. “I’m just out in front of people to share a message of hope and equality,” he says. “I hope you agree with me. But if you don’t, oh well. There are millions more that do care and are on my side.”

Through his work with HRC, GLSEN, TEP, and individual contacts he’s made along the way, Biggs is in a prime position to assist LGBTQ youth and their allies in Tennessee on a rash of recent issues.

He’ll be steering discrimination victims of Haslam’s May 5 signing of the “natural and ordinary meaning” bill to legal assistance, for example. He’s also supporting the multiple LGBTQ and ally groups regionally who are trying to encourage the Knox County Board of Education to develop a trans-inclusive student bathroom policy.

He personally is making a big push to educate the local populace about the importance of using the pronoun preferred by transgender and gender nonconforming youth. “Not using the preferred pronouns and name especially after someone asks you to do so is just not cool,” he says. “You are essentially telling them that you do not care enough about them to acknowledge who they really are.”

“Where you see me, I’m going to be telling my story—how I got on top of my life after a very dark time, and how suicide is never the way out,” says Biggs, who has trained in suicide prevention with the QPR Institute. “I know the situation looks different for every person, and I know there is help for each one of you.”