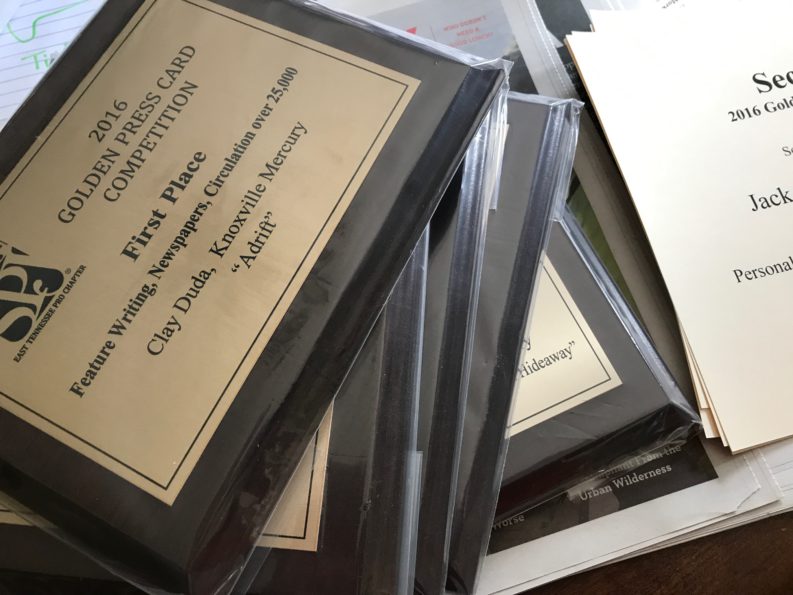 There is one day of the year when local journalists can momentarily shed their fear of pink slips and feel at ease with their place in the world: the Golden Press Card Awards luncheon, presented by the East Tennessee Society of Professional Journalists.

Every spring, reporters in print, TV, radio, and online submit their best work from the previous year to be judged by an out-of-state SPJ chapter (this year, it was Florida). Then they gather at the UT Visitor’s Center on a Sunday afternoon to nosh, chit-chat, and bask in a sense of camaraderie among their competitors—before nervously waiting to find out what places they came in for each category. But even those who don’t come in first will agree that they have won the most fleeting sensation a journalist can experience these days: appreciation.

This year, as always, the Knoxville Mercury chose to compete among large daily papers (circulation 25,000+) rather than in the non-daily division. We believe our work stands up to the best of the region despite our micro-sized staff. And the judges agreed, awarding us a total of 11 honors:

• Feature Writing: “Adrift” by Clay Duda
Judge’s comments: “Incredible, intimate reporting on an issue that’s been reported on extensively. This story allows the reader to see the state of homelessness in its rawest form, through someone who is living through it.”

• Investigative Reporting: “Sex in the Classroom” by S. Heather Duncan
Judge’s comments: “A powerful piece that is very well researched and organized. Despite a lot of difficult issues here, the story clips along with the help of well-placed infographics and helpful subheds. What I love about this story is it raises and addresses an issue that people may not have previously perceived as a concern.”

• Reviews/Criticism: “Home Palate” column by Dennis Perkins
Judge’s comments: “Good food writing appeals of all of the senses. Dennis Perkins does just that. What elevates his work is that he challenges readers to experience flavors that may be new or different to them: Laotian, Central American, haute cuisine. What’s more, Perkins puts the new restaurant openings in the context of the greater Knoxville restaurant scene.”

• Page Design: cover designs by Tricia Bateman
Judge’s comments: “What separated the winner wasn’t clean, clear design or big, compelling art, it was Bateman’s creative use of typography. Sometimes that’s going big and bold, but she also can use type in classic and understated ways.”

* Also: Series/Package/Project (for non-daily papers)—Thomas Fraser entered his Gatlinburg fire stories in this category, part of our cover story package, “Aftermath.”
Judge’s comments: “This work has scope beyond mere reporting of facts–it goes to the why, the how, and the what next. The writer(s) behind this series clearly spent time considering their angles to best report with both depth and breadth in ways other media outlets may have overlooked, covering the causes and effects from governmental, business, and personal angles with dexterity and completeness.”

• Investigative Reporting: “Equal Protection” and “Citizen Review” (parts two and three of our series on the Knoxville Police Department) by Heather Duncan

* Also: April also won first place in “Work for Other Media” for an article she wrote in Rue Morgue Magazine: “The Witch of North Bennington: 100 Years of Shirley Jackson.”

Read about all the GPC winners here. 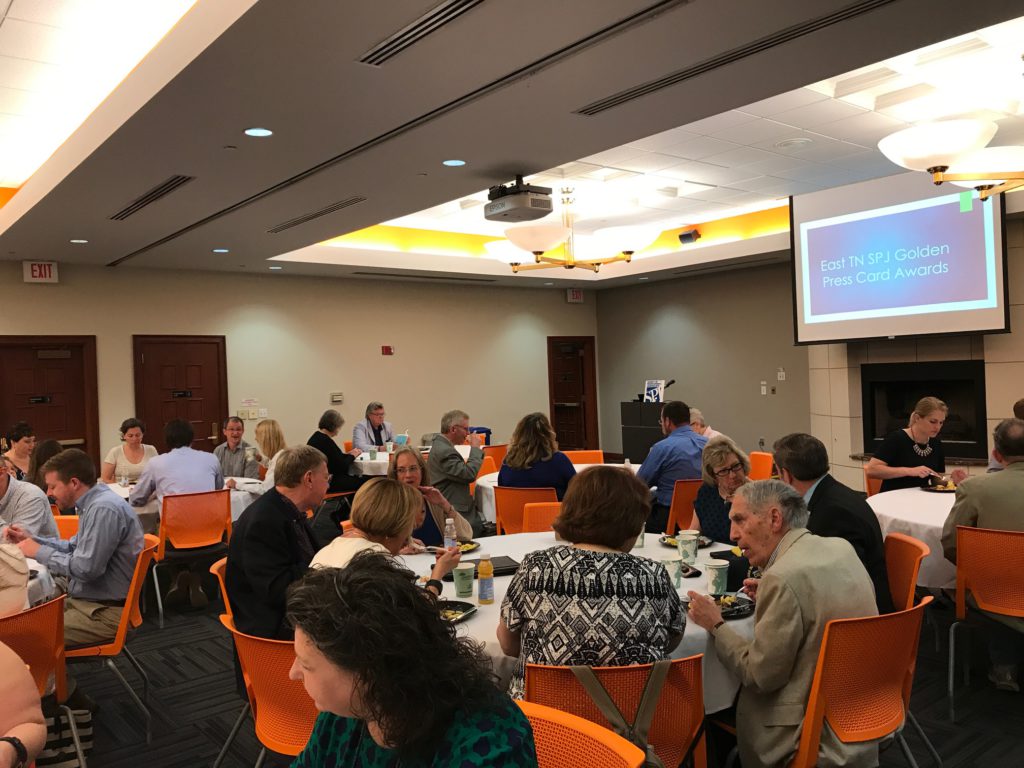