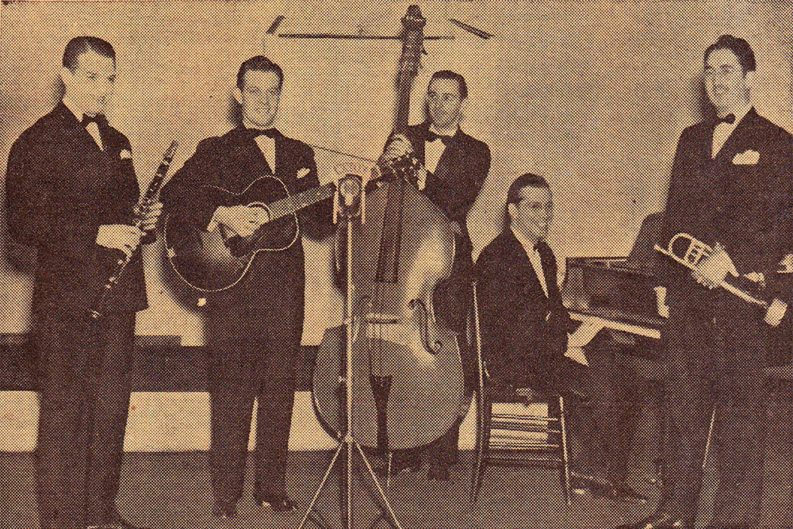 WNOX’s Mid-Day Merry-Go-Round, which aired from 1936 to 1961, was a pivotal program in the history of country music. Wildly popular throughout East Tennessee and bordering states, the show’s legacy outside of Knoxville will likely remain as something of a farm team for acts who would go on to make it big in Nashville. A few off-air and studio recordings from the 1950s have been found, but it’s long been thought that any recordings of the show’s earliest days hadn’t survived. It turns out that a recording of the Merry-Go-Round from Friday, Nov. 11, 1937, has been in the radio archive of the University of Memphis for years, and it reveals a vastly different Merry-Go-Round than most might expect.

The Bensman Radio Program Archive, established in 1969, contains more than 1,500 hours of recordings. The catalog is available online, where you can request a copy of a particular program. Local disc jockey Dave Young had a CD of the 1937 show from the archive, which was one of several items his wife donated to the Tennessee Archive of Moving Image and Sound after he died. Running around an hour, it was copied from four 15-minute transcription discs, a common and easy way to record in the days before magnetic tape. The audio isn’t ideal, but given the source and date, we’re lucky it sounds as good as it does.

Judging by the recording, the 1937 Merry-Go-Round was a much different kind of show than oral histories, books, and photographs have led us to imagine. Of the dozen or so songs performed, only a few have a distinct country or old-time sound. Instead, the dominant style is jazz. The Dixieland Swingsters were something of a house band at the time; in this show, “Haywire” Dave Durham, an accomplished trumpet player introduced by host Lowell Blanchard as “the hottest fiddle player on the air,” blazes through two jazzy fiddle tunes. Accordion player Tony Musco plays two numbers that have more jazz and polka inflection than country flavor. Even Tex and Curly, the “Arizona Cowboys,” make the old-time tune “Back to Old Smoky Mountain” more swing than western. After a series of corny jokes, the performer referred to as Monk sings the equally corny  “Oh Susanna, Dust Off That Old Pianna,” a saloon song recorded by jazz artists such as Fats Waller and the Harlem Hot Shots. Dixieland Swingsters’ “Touched in the Head” is a ragtime tune, and toward the end of the program Blanchard himself takes a crack at crooning with “Waiting at the End of the Road.”

Buck “Huckleberry” Fulton tells Blanchard that his throat “feels like a piece of raw beef steak,” but he still delivers the most classically country song of the show, “The Convict and the Rose.” A listener writes in to question the gender of 12-year-old “Little” Frankie Turner, who declares, “I’m a boy, but I sing like a girl.” He proves it with an ensuing country number. The show ends with a group sing-along of “Skip to My Lou.”

Those three songs are about it for country music. It’s well known that the Swingsters were a popular band around town at the time, and that many jazz and even classical musicians frequently played the Merry-Go-Round. But it’s quite a surprise to hear so little country music on the show.

What’s more expected is the cornball humor and sales pitches throughout the show. In fact, there’s more talking than music during the hour. Blanchard acknowledges dozens of birthdays and anniversaries. He reads letters from listeners in Knoxville and Maryville but also from Alabama, Kentucky, North Carolina, and Virginia. He also reads ads for Indian River Medicine Company and Standback Headache Medicine. We’re informed that many people who used BC Powder for headaches have also learned it’s good for simple nervousness. There are spots for Miller-Jones Family Shoe Store, at 14 Market Square, Kerr Motor Company, at 508 N. Broadway, Glenmore Clothing Company, at 314 Wall Ave. (“just opposite the St. James Hotel”), and Fielden Furniture Company, at 208 W. Vine Ave. (“just 77 steps from Gay Street”).

A new feature, the “candid opinions of the Merry-Go-Round,” is introduced: “These boys express their opinion of their own volition,” Blanchard explains. “They are not being paid for what they say. They merely say what they think.” Tony Musco, affecting a Chico Marx-esque exaggeration of his Italian accent, says “I like-a the girls with blue eyes. And greenbacks.” “There are two kinds of men,” Huckleberry tells us. “Those who do what their wives tell them to, and those who ain’t never got married.” There’s much laughter and chatter between the host and musicians, giving a sense of casual ease, but Blanchard keeps the show moving swiftly. It’s a lot of fun, probably even more so for the live audiences who packed the WNOX auditorium at 10 cents a head.

I asked Marvin Bensman, the 80-year-old University of Memphis professor emeritus who started the Bensman Radio Program Archive, if he knew where the original transcription discs were. He told me he retrieved the WNOX discs, along with dozens of other stations’ recordings, decades ago, from the closet of a defunct Memphis radio station that was about to be demolished. He transferred them to reel-to-reel tape, from which compact cassette and CD copies were later made. At some point he had to downsize; he says he thinks the discs were probably thrown out then. He’s not sure if they ended up in a landfill or if someone else has them. But he’s to be thanked for saving a random Merry-Go-Round show and making a recording, providing an unexpected glimpse into the city’s music history.