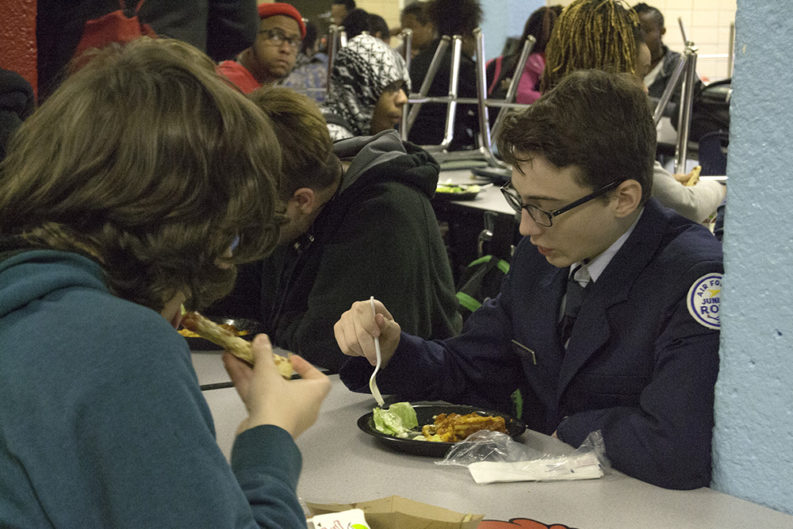 It’s halfway through the school day, and this first-grader doesn’t have any lunch money. In some school districts, she’d have to throw out the food on her tray, or clean the cafeteria to work off the debt, or wear a stamp or a wristband saying she owes money. Maybe she should only be allowed to eat a cheese sandwich.

These are all policies various schools across the nation have put in place to deal with student lunch debt, and headlines about them in the last year have caused a national backlash. Last week, Arizona passed a new law banning these practices and requiring that students who can’t pay still be provided a federally-reimbursable lunch—in other words, not a cheap, less nutritious substitute. Texas and California appear poised to follow suit.

Last year, a Pennsylvania cafeteria worker quit after being forced to take a hot lunch away from a student who owed money, and two more were fired elsewhere for feeding elementary school students a hot lunch without payment.

Concerns about these practices caused such uproar that the U.S. Department of Agriculture, which administers the federal school lunch program, issued new guidelines  for school districts in March. These require that a written, district-wide policy about overdue school lunch bills be provided to parents at the beginning of every school year. Schools can still choose to shame students or refuse to feed them—but they have to state that up front, in writing. The only thing USDA specifically forbids is using the lunch money in a hungry child’s hand to cover an unpaid cafeteria balance instead of giving him food.

Children whose families can’t afford the lunch price can fill out paperwork and be enrolled in a federal program that will foot the bill. Some don’t do this, even though they’re eligible—the Arizona law requires schools to go to greater lengths to inform and enroll these families—and others that have the money simply don’t pay.

Parents are automatically notified via email, phone, and text about any unpaid meal balances. The district’s written policy states that the school nutrition director will notify the parent or guardian in writing of an unpaid account balance, and inquire about whether the family would like to apply for free or reduced-price meals. If there’s no response, within two weeks the cafeteria manager follows up with a personal call, then the principal. Eventually the debt will be referred to a collection agency.

The USDA guidance adds that states and school district should “ensure their efforts do not have a negative impact on the children involved, and instead focus primarily on adults in the household responsible for providing funds for meal purchases.”

A recent survey by the School Nutrition Association found that 53 percent of school districts reported an increase in the number of students unable to pay for their lunches, and the association’s 2016 operations report states that about three-quarters of school districts had an unpaid student meal debt at the end of last school year. Knox County Schools has an estimated $159,000 in unpaid meal charges to date, Harrington says in an email.

A December tweet that went viral recommended that Americans pay down children’s public school lunch balances as a way to make a difference in their communities. Many across the country did, to the tune of tens of thousands of dollars.

• Can School Lunches Be Fixed? Austin-East Experiments With “Real Food”

• The Unexpected Origins of the School Lunch Program