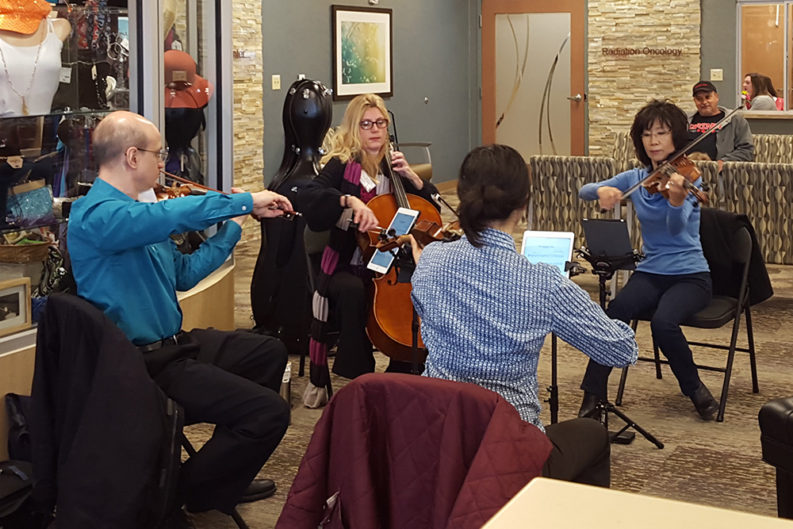 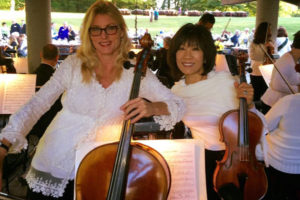 One of the Knoxville Symphony Orchestra’s biggest ongoing success stories is its Music & Wellness Program. Introduced by Lucas Richman in 2003, the program began in hospital lobbies with small groups and individuals providing live music in order to enhance the healing process and benefit patients, visitors, and staff.

In 2016, the KSO was one of 22 American orchestras to receive a Getty Education and Community Investment Grant, and board-certified music therapist Alana Dellatan Seaton was brought on board to advise the musicians in more specialized techniques. The grant also funded teacher certification training through the Music for Healing and Transition Program. Of the five former and current KSO musicians who participated, four are now Certified Music Practitioners recognized by the National Standards Board for Therapeutic Musicians, and one continues to collect practicum hours toward certification.

Cellist Stacy Nickell and violist Eunsoon Corliss recently sat down to talk about their experiences as therapeutic musicians.

How is playing therapeutic music different from performing the regular way?
Corliss: It’s not performance—it’s service.

Nickell: It’s “entrainment” rather than entertainment.

Corliss: That means the synchronization of the patients’ brain waves and heart rate with our music. When we go into a patient’s room, we look at the monitor first. You’re trying to assimilate a comfortable heartbeat. At UT Hospital there’s a NICU that I go into. Those preemies are so tiny. We play baby songs from “Twinkle Twinkle” to “Old MacDonald.” And we really do watch that monitor—the oxygen level goes up. Their hearts beat so fast—they calm down a bit. And they start squiggling and sucking their pacifiers and three or four minutes into it, most of them just go to sleep. It’s a really good feeling to see that.

Are there different types of playing for different situations?
Nickell: We learned five categories of patient condition: acute, which could be someone who has just come out of major surgery but is stabilized; non-acute—the patient is in bed recovering with not much to do; cognitively impaired—that’s someone with dementia; high pain and anxiety; and actively dying. For a non-acute patient—the guy who’s just bored—you can play anything. But you have to be very careful with acute patients, playing only 50 to 70 beats per minute.

Corliss: For the cognitively impaired we play oldies—tunes people recognize.

Nickell: We call it “familiar music.”

Corliss: I went to a nursing home. When I walked in one patient’s room, the nurse said, “She hasn’t spoken for years.” The lady was in bed; she was covering her face and I could only see her eyes. I played “Jeanie with the Light Brown Hair” and her eyes followed me. She said, “Jeanie with the Light Brown Hair.” And then she even sang along! I was shaking. I was told that she was non-verbal. I mean, who would think?

Nickell: For high pain and anxiety you want to improvise gently within a small framework—no big octave leaps, no strong rhythms. Very gentle and simple and soft.

What about playing for hospice patients?
Nickell: For the actively dying we play loosely metered, improvised music—very gentle, soothing, not rigid. If you’re playing 50 or 60 beats per minute, that can keep the heart going and impede or prolong the dying process. You want to follow and encourage the person’s natural transition, so if they stop breathing for a bit, you stop playing. You don’t give them something to hang on to. For someone who is actively dying, silence is a big part of entrainment.

Corliss: You go with the way they are.

You mention improvising. That’s not something classical musicians do very often, is it?
Nickell: One of our training modules was called “Music as a Language.” That’s where we learned to improvise in different modes, or scale configurations, which can sound dark or bright or in between.

Corliss: The teacher read a poem. And we would try to get the poem’s mood, and we’d brainstorm: What kind of mode suits this feeling?

Nickell: We would sit in a circle; one person would play and then pass it on to the next person. Sometimes we were sent off in small groups to compose something on a poem or a story. We’d write it down, then perform it for the others…

Corliss: … and the other team had to guess what it was about!

Nickell: There were other people taking the training, too—one came from Dallas, one from Kentucky. We were the only classically-trained musicians.

Corliss: I had not had a chance to play like that. At first I was very uncomfortable. It stretched our musician brains! It’s so different. But everyone was so supportive.

Why did you decide to get training in music therapy?
Nickell: My mom had Alzheimer’s for 10 years before she died. I remember being at our family cabin with both my parents. I had my travel cello—it’s small so I could bring it on the plane. And my mom seemed so out of it and down and you could just tell that she was in her last months. But when I started playing hymns, suddenly she just lit up. And that’s when I think I realized how important music is for people who are ill.

Music triggers something in your mind and memory that nothing else can, so there’s something deeply embedded in our human DNA. I think that this language is just so mysterious, but it’s effective.

Corliss: I lost my father in 2002, several years after he suffered a stroke. I would carry my viola in and play but I wasn’t quite sure how much he understood—I was kind of reluctant. But one time I was in a quartet that played in his NHC facility. Mom brought him out to watch us. And he cried. People around us were jumping for joy—“Oh, he is showing his feelings!” I had thought all my father’s senses were gone; we had had no communication for four years. But this crying—it was a special kind of crying, I know that. That made me think, “I need to play for people. This is a wonderful thing that I could do.” I still think that my father gave me this opportunity to do more. Fortunately, the KSO supported us going in this route.

• KSO’s Music and Wellness Program provides live musical performances to benefit patients, visitors, and staff in healthcare settings.
• KSO string quartets perform at UT Medical Center and Covenant Healthcare facilities for patients while they are receiving treatment and in waiting rooms for families of patients, as well as for members of the Cancer Support Community.

The impact of President Trump’s proposed elimination of the National Endowment for the Arts is too complicated to recount here. NEA grants are matching grants and any arts organization that receives partial funding this way—including the KSO—has much to lose. So buy tickets to KSO concerts and fundraisers, “like” them on social media, show support with a financial gift, and contact your congressmen to urge them to hold on to the NEA. 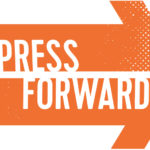