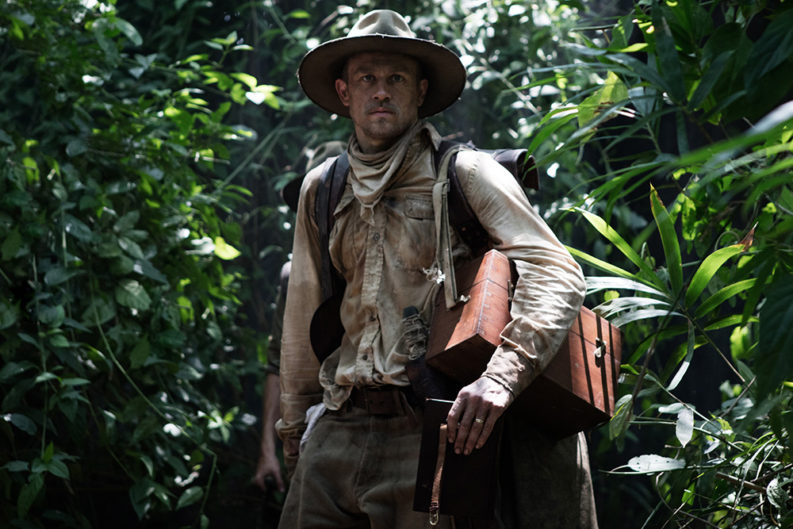 Writer-director James Gray, the art-house favorite behind such films as We Own the Night and The Immigrant, seems an unlikely steward for the kind of old-fashioned adventure epic that’s been in short supply since the death of Sir David Lean. But with The Lost City of Z, Gray doesn’t just resuscitate an all-but-lost genre; he retains its classic sensibilities while purging it of affectation, making for an experience that hearkens to another era while feeling entirely modern. Equal parts thrilling and contemplative, Z is old-school cinema, devoid of stylistic tics and refracted through a decidedly contemporary lens.

The film opens with a clever feint that tells us right away that Gray is a skilled manipulator of expectations. We hear the ominous pulse of drums over a black screen and assume we’re about to be dropped headfirst into an Amazonian jungle, only to find that the drums belong to a tribe half a world away: British army officers embarking on a formal hunt.

Like so many of the events that unfold in Z, the hunt is an exercise in classist posturing. Maj. Percy Fawcett (Charlie Hunnam, in his best performance to date) is the one to bring down the stag, but he’s literally denied his place at the table because, as one senior officer puts it, Fawcett was “unfortunate in his choice of ancestors.” Fawcett’s father, we learn, was an alcoholic and an unlucky gambler, and the ambitious soldier is eager to redeem his family name. So he’s an easy mark when the Royal Geographic Society needs to send a man to Bolivia to settle a border dispute with Brazil in the interest of averting war between the countries (and strengthening the British Empire’s hand in the burgeoning rubber trade).

At first Fawcett balks at the idea of mapmaking—he says he’d prefer a deployment where he’d see “more action,” bless him—but he reluctantly accepts the mission on the condition that success will clear his family name, even though it will take him far away from his pregnant wife (Sienna Miller) and young son (eventually played by Tom Holland). Soon he’s aboard a steamer headed for South America, where he meets up with surly but experienced aide-de-camp Henry Costin (a prodigiously bearded Robert Pattinson, whose charisma and acting chops might be this film’s most surprising discovery).

Fawcett means to get the job done as quickly as possible, but a curious thing happens to him on his journey. He acknowledges that, to outsiders like him, Amazonia is essentially a “green hell,” but he falls rapturously in love with it. He returns to England a hero, but almost immediately finds himself jonesing for the jungle. We soon begin to realize that Fawcett is the sort of man who continuously moves his own finish line. He might have set out to restore his family’s reputation, but as soon as he checks that box, he sets his sights on the greater glory of, well, glory.

That’s where the “lost city” comes in. Fawcett thinks he found evidence of an ancient civilization hidden deep in the forest, where no Caucasian man has ever set foot. He devotes the rest of his life to an increasingly quixotic quest to find it, even if it means neglecting his family or, more dangerously, infecting them with his obsession.

Z offers plenty of thrills, but it’s at least as concerned with Fawcett’s internal yearnings and his troubled family dynamics as his wanderlust. It’s a thematically sophisticated, intellectually engaging story couched in the pulpy trappings of a men’s adventure magazine. Even when Fawcett and co. are dodging arrows and fighting off piranhas, the pacing is unhurried and even hypnotic.

Visually, Gray’s film is a thoroughly immersive historical epic, majestically photographed and resplendent with period detail. His cinematographer is Darius Khondji, who has shot some of the 21st century’s most graphically stunning films for the likes of Jean-Pierre Jeunet and David Fincher. Not for nothing, Z’s final shot is easily the most haunting, moving, and beautiful image of the year. I can’t stop thinking about it.

The movie is far less concerned with verisimilitude where its hero is concerned. Z is based on David Grann’s exhaustively researched nonfiction book of the same name, but it’s an enthusiastically revisionist portrait of a man whose jaw-dropping racism and sense of privilege eventually contributed to hundreds of deaths.

But all that is beyond the purview of the film, which concerns itself with a character who feels so out of place in his own time and culture that he routinely risks gruesome death to find a sense of purpose and belonging. Gray gives the viewer plenty of room to decide whether his version of Fawcett is a restless visionary or a reckless fool; whatever your verdict, Z is a deeply compassionate character study and a thoughtful, engaging cinematic experience.

The Lost City of Z is now playing at the Regal Riviera and Regal Downtown West Cinema 8.