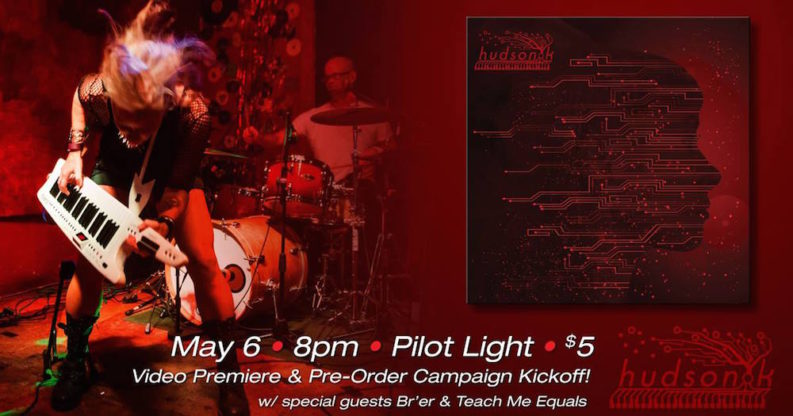 In July, Hudson K will release its third album, the follow-up to 2013’s Ouroboros and the Black Dove. Singer/songwriter/synth sorceress (and now recording engineer and producer) Christina Horn describes the new self-titled collection—a nine-track concept album about nature, technology, and humanity—as “an authentic version of my sound.”

The campaign for the new album kicks off with a May 6 show at Pilot Light, where the band—Horn and percussionist Nate Barrett—will kick off PledgeMusic pre-orders for Hudson K and release a video for the first single, “Mother Nature.” They’ll be joined by the touring experimental pop groups Br’er (Washington, D.C.) and Teach Me Equals (Olympia, Wash.).

We’ll have more on the album and the video soon, but here’s Horn’s account of the inspiration for the new disc.

I built a studio in my house of the course of the last 2 years. Floating walls and sound proofed with my own blood, sweat and tears! I recorded all the bass parts, synth lines and crazy electronics in my home studio. From there, we went to Top Hat Recording in south Knoxville and worked with John Harvey and Mary Podio to record the drums and vocals. John and I mixed the record together and sent if to Mike Picotte [in] Indiana for mastering. I produced the record myself.

After the experience of working with (male) producers on the last 2 records, I realized I wasn’t allowing my own voice to be heard. When you have a producer, they get to make a lot of the final creative decisions. While I’m still happy with those records, I know they are not a true representation of what’s been in my head and heart. This time around I wanted to trust myself and use the experience that I gained over the last 10 years. I’m 100% invested in this project and it’s an authentic version of my sound. I also learned that only 5% of audio engineers and producers are female, and that statistic bothers me.

We had Tim Lee come in for guitar on one song called “Believer.” Jason Boardman provided synthy noises on the track “Origin.” You can hear what sounds like outer space, sound waves and squelches. Eric Dieter recorded some guitar parts at his home in PA and I took them, chopped them up and reversed a few even! He’s on Mother Nature, Serial Killer and Second.

There is a storyline in the album. I’ve been exploring the idea of what is man or woman-made versus what is “natural.” I learned, through this process, that just like mother nature we are all creators and destroyers.

This guy heckled me on twitter and said he didn’t want to follow any bands that used computers to make music. I challenged him by saying that the humans made the computers, the same way we made guitars and amplifiers, and it’s all just energy being transferred.

The theme on this record explores that juxtaposition of nature v. technology and whether or not it’s one in the same. Creator versus destroyer. We are all wild….