Marches to Protest Rollback of Environmental Protections - The Knoxville Mercury 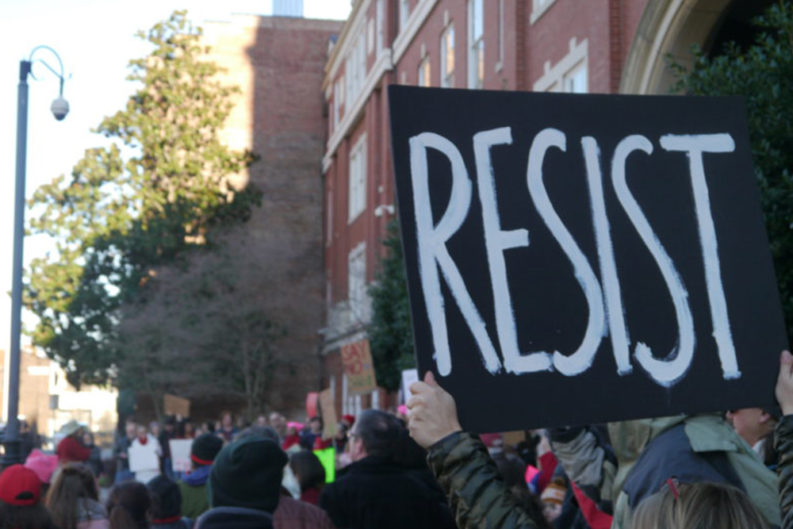 People who would like the place where they live — and the earth generally — to remain sort of pleasant for human habitation are planning protest events for the next two Saturdays in Knoxville. Most of the focus will be on concerns about President Donald Trump’s policies and proposed budget, including plans to hack almost a third of federal Environmental Protection Agency funding, denying climate change, and rolling back environmental protections.

First comes the March for Science, a local “sister march” to a Washington, D.C. event that has more than a million social media followers (and has inspired the knitting of pink “brain” hats — the scientists’ spin on the cornered “pussy hats” of the historic Women’s March in January).

The Knoxville event starts on the University of Tennessee campus outside Ayers Hall with a rally at 11 a.m. Co-organizer and UT graduate student Simone Godwin says she’s hoping for about 500 participants. Speakers are still being finalized, but topics will include the intersection of science with faith and with labor and the Trump Administration’s halt on publication of federally-funded research. Godwin says residents from Clearwater and Cosby will talk about the effects of coal ash in their communities.

“East Tennessee has struggled a lot with environmental contamination,” Godwin says. “We’re hoping for folks to see science as a tool for achieving social progress and social justice, and we want to bring scientists into community organizing and connect grassroots organizations with scientists and community members.”

Among the stated goals of the national and local marches are advocating for evidence-based policy and regulations that protect vulnerable communities; accurate science education in schools; open access to scientific knowledge; adequate research funding; and government transparency in communication about science.

The Knoxville march, which takes place after the rally, will wind up at the John Duncan Federal Building.

The following Saturday, on the 100th day of the Trump Administration, a “March for Climate, Jobs and Justice” will be followed by a “Climate Teach-In,” then a celebration with food and drink at Scruffy City Hall. Music, a children’s performance, and neighborhood networking will be incorporated in the day’s events. (Again, this is a companion event to a protest of the same name in Washington, D.C.; a local contingent of protesters will be headed to that on a sold-out overnight bus.)

“Climate Change is urgent, it’s our whole world, it’s all of us, essentially forever,” writes John Todd Waterman, who is on the executive committee of the local Harvey Broome Group of the Sierra Club. “We can’t take it back. So it’s also the greatest opportunity we’ve ever had to do profound, lasting good.”

Although the national march coalesced around the issue of climate change, it has picked up many other causes, including immigrant rights; good jobs that provide a living wage and protect worker rights; and racial, social and economic justice.

The march will begin at 10 a.m. at the corner of Gay Street and Summit Hill Drive in the East Tennessee Tribute to Country Music Park. It will head down Gay Street before continuing to am 11 a.m. rally at the World’s Fair Park amphitheater.

Scheduled speakers are Gloria Johnson of Organizing for Action Tennessee, Mary Headrick of the Harvey Broome Group of the Sierra Club and Physicians for Social Responsibility, Rev. Wayne Thomas of Tennessee Interfaith Power & Light, and Stephanie Kodish of the National Parks Conservation Association, among others.

Then, from 1 p.m. to 5 p.m. a Climate Teach-In will be held at Church of the Savior United Church of Christ, at 934 Weisgarber Rd. There will be a presentation from the Climate Change Science Institute at Oak Ridge National Laboratory and speakers from immigrant and faith groups.

Events will wind up at Scruffy City Hall with food and conversation between 6 and 9 p.m.

Lisa Stalnaker, a stay-at-home mom with two toddlers, hopes to attend the climate march. “The fact that so many people, including our president, don’t even agree that climate change is real, is happening, and is important – that is a big problem,” she says.

After the presidential election, Stalnaker got involved with the Moms Clean Air Force, a national organization with regional branches, and participated in a Knoxville protest over Scott Pruitt’s nomination to head the EPA. She says the march experience helped her recognize that she was part of a larger group and feel that she could make a difference.

“It kind of lit that fire a little bit,” she says. “You know, if I can go to a rally, I can take these other steps. After that I went and talked to my senator, even though I was nervous.”

Stalnaker worked for an environmental contractor in the past, and she notes that the proposed massive EPA job cuts could have a trickle-down effect in state governments and the private sector.

“As far as that goes, it’s a job-killer,” she says. “Every job is not a coal miner job or a manufacturing job. I hurt for the people that lost their jobs in the last ten years since the real estate bubble burst, but the world changes, and there are other people who are going to be hurt by these cuts.”

The president’s proposed budget would cut funding for Clean Air Act enforcement in half and eliminate programs that help protect children from lead paint poisoning, monitor the safety of public water systems (think Flint, Mich.), and test homes for airborne radon (a big problem in East Tennessee, and the leading cause of lung cancer among non-smokers). It would also eliminate the EPA’s Environmental Justice program, which aims to address the disproportionate effects of pollution on poor and minority communities.

“I heard other day the Trump administration is on the road to spending more on personal travel in the first year than the Obamas did in eight years – and we don’t have the money to protect children from lead paint?” Stalnaker says. “The EPA doesn’t need to be on the chopping block as it is right now…. It’s hypocrisy, and it’s not OK.”