Fishing on a Fine Spring Day, Hip-Deep in Citico Creek - The Knoxville Mercury 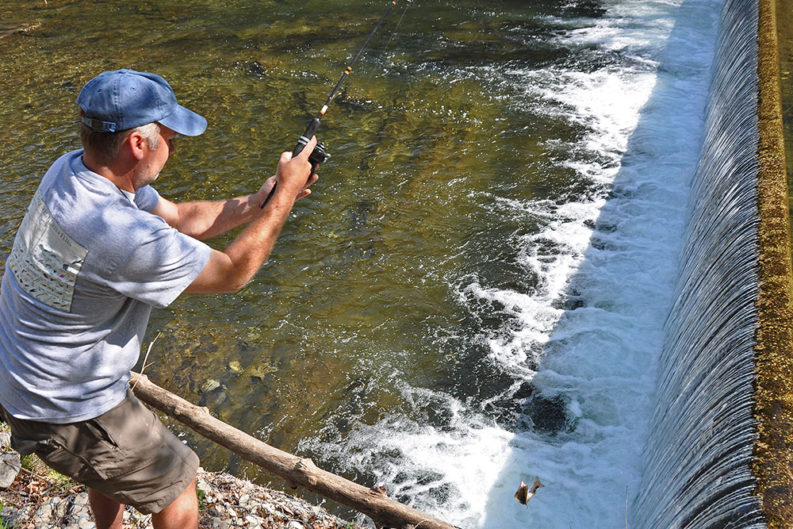 In the middle of Citico Creek, wearing a borrowed pair of chest waders and felt-soled boots three sizes too big, I sat down on a rock that was a half-foot underwater and let the frigid water flow around me. I faced downstream, the direction I had been walking. Riffles and eddies played out in the foreground, and a swath of whitewater roared about 50 yards downstream.

Although I hadn’t caught anything yet, I couldn’t think of anyplace else I’d rather be at that moment, on Good Friday, the wildflowers blooming red, blue, and yellow on the banks, butterflies and dragonflies thick in the air, trout and smallmouth taunting us in water as clear as any stream I remember.

Maryville College biologist Drew Crain, his son Jared, and I had chosen this officially designated wilderness area in the Cherokee National Forest after much deliberation. Drew had already caught a couple of the rainbow at the first place we stopped, a weir dam, where we had fished from the bank. Above the dam, dozens of browsing fish feigned interest in the rooster tail lure I reeled past them, and veered away when they got within a foot or so.

Drew caught his rainbow—a species that the Tennessee Wildlife Resources Agency stocks in Citico Creek—below the dam in the churning, oxygenated waters. Normally, I don’t really care that much if I catch fish or not, but after he scored the two-to-nothing lead and we pulled on the waders, I was motivated to get up close and stalk the wary fish. I changed to a Panther Martin lure. 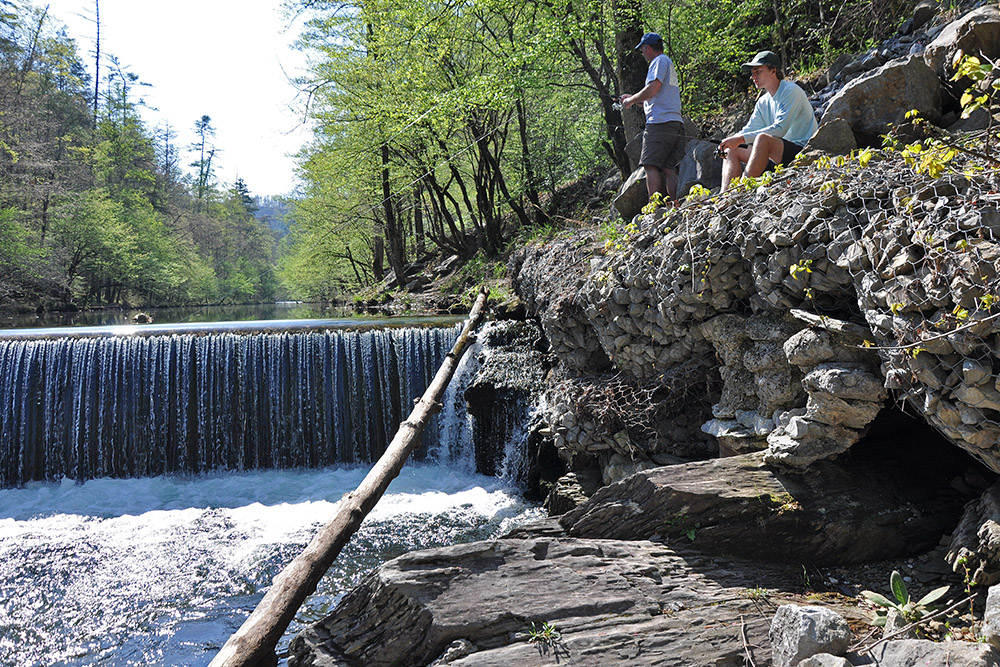 Citigo Creek is in a designated wilderness area in the Cherokee National Forest.

We’d seen a few other fishermen and met some traffic on narrow (mostly gravel) Citico Road, which winds alongside the creek most of the way. The forest service campsites were all taken. But at the next place we stopped after the dam, we took a short hike from the road to the creek itself, and it truly seemed like Citico was living up to its wilderness designation.

A couple of hours earlier, at Sloan’s Super Center in Vonore—a general store, sporting goods store, grocery, gas station, and restaurant, all in one—we stood in line with others getting our fishing licenses renewed.

I announced for some reason that my license had expired a month or so ago, and a joker who had been dipping minnows for customers asked, “Have you fished since then?”

I said I couldn’t remember. He made a motion toward the front of the store and said, “Officer, here is the lawbreaker.”

There was no fish cop at Sloan’s. Regardless, Drew had gone to a lot of trouble on the phone with TWRA to make sure we could legally fish Citico on this holiday. Normally, the creek is closed to fishing on Thursdays and Fridays.

With our new licenses and our Citico permits, we lit out for the wilderness on Highway 360, which took us past the Sequoyah Museum, the confluence of the Little Tennessee and the Tellico rivers, and the ancient Cherokee Overhill villages of Toqua, Chota, and Tanasi. Citico, another Overhill town, once stood at the mouth of the creek we were fishing, a few miles downstream where it meets the old Little Tennessee River, now Tellico Lake.

After resting on the rock a bit, I got up and started casting toward the far side of the creek in the deeper water. That first strike, I thought I’d snagged a rock like the other times, but then the line started zig-zagging and the rod bent as I stumbled toward the fish on the uneven and slippery terrain of the creek bed. A minute or so later, I held a sunfish in my hand, the biggest one I’d caught in a long time, his breast so brightly orange it hurt to look at. After showing him to Jared, I released him. Drew had disappeared upstream around the bend, unaware that I was closing in on his lead. 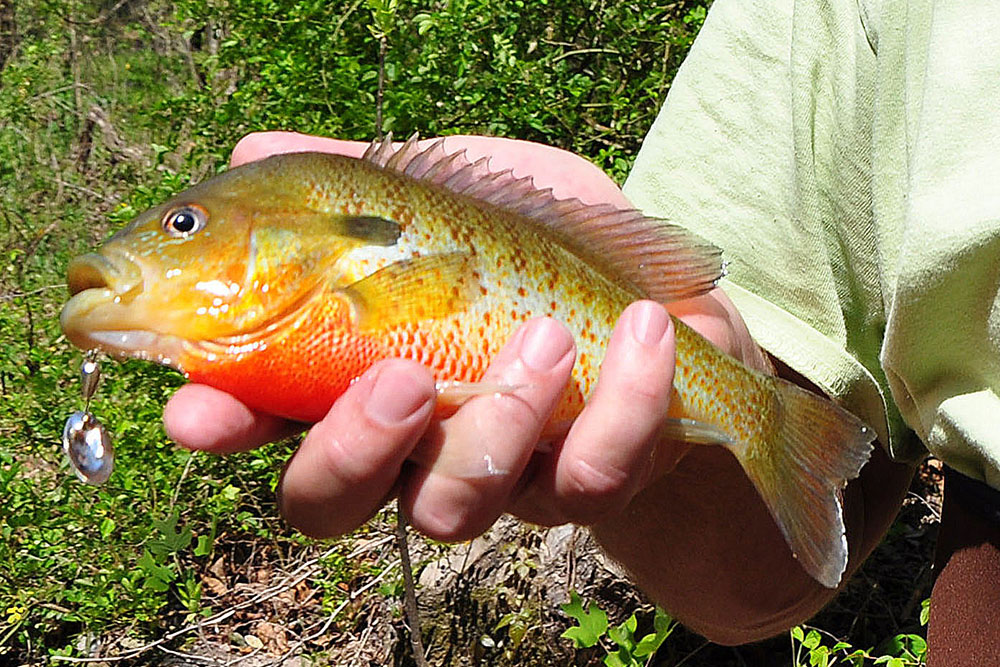 The author caught a sunfish!

After a bit, we drove farther downstream and bushwacked through the woods for a few hundred yards to the creek. I headed upstream toward a fallen tree, Drew headed downstream, and Jared sat down midstream, content to let the fish come to him.

Walking on a creek bed like Citico’s, I was getting vivid physical feedback about the fish’s habitat, the shelves and the pools that I thought they liked, a terrain of peaks and valleys that had me lurching and fighting for my balance much of the time. Casting toward water that glittered in the sun midstream, too shallow for fish, I thought, I caught two smallmouth, one of them a keeper that I put on Drew’s stringer with his rainbow.

When we were loading up to leave, Drew commented that wader fishing worked the mind, body, and soul. It took mind and body to stalk the fish. Being part of the stream, feeling the weight of the water as you tossed a lure, plunging deep into a chest-deep pool unexpectedly, hearing the birdsong all around—that confluence of sights and sounds on a brilliant spring day was what fed the spirit.

You can get to Citico Creek from Highway 411 south, turning on Highway 360 at Vonore, which meets up with Citico Road. Or you can approach from Tellico Plains and take Highway 165 (the Cherohala Skyway), turn left toward Indian Boundary Campground, then right onto Citico Creek Road. The permit to fish Citico costs $6 for one day. 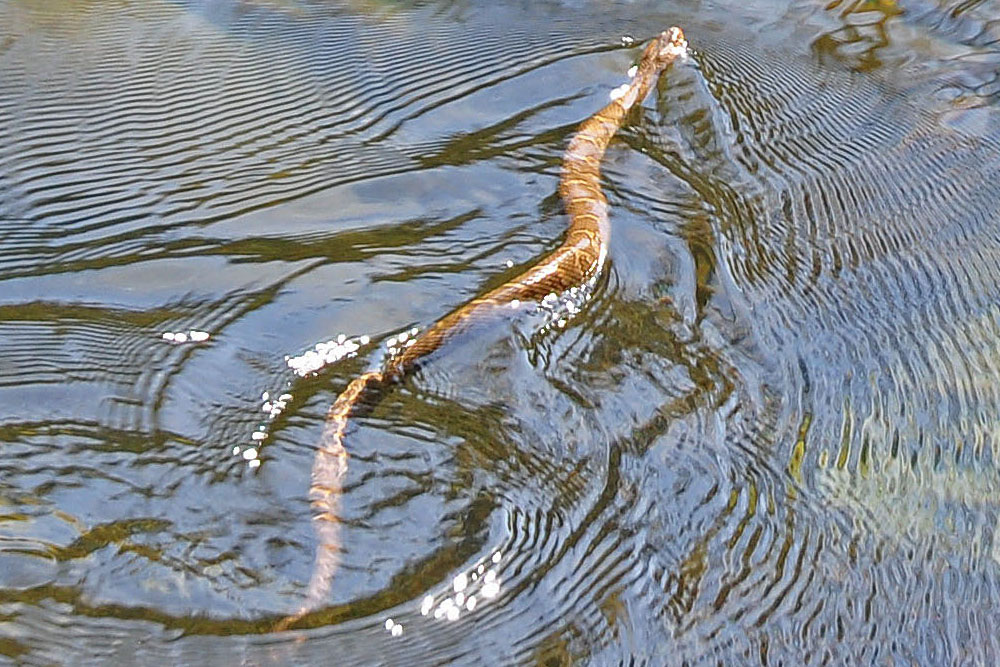 The author managed to avoid a banded water snake.