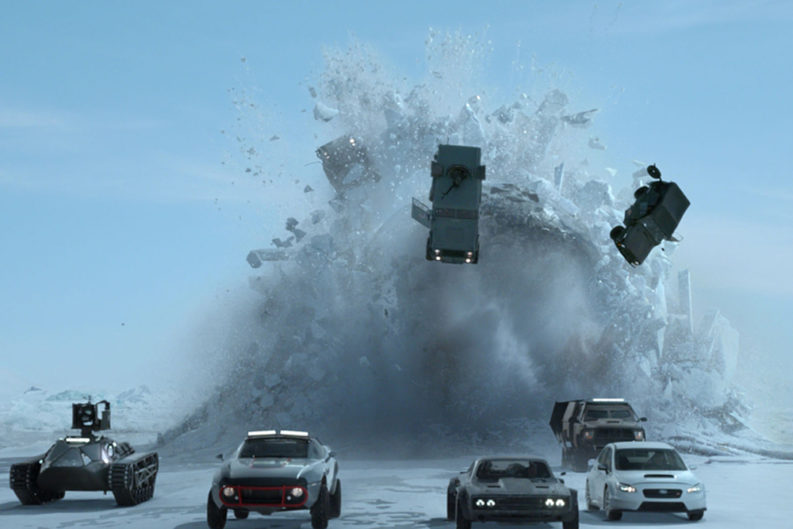 I’m not sure what’s most impressive about the Fast and Furious franchise: That it survived the death of one of its main players, that it’s morphed into a blockbuster version of a G.I. Joe cartoon, or that, eight movies in, it’s still fun.

Probably the last one, since the wheels were starting to wobble in the seventh installment. The novelty of the franchise’s improbable evolution from a scrappy street-racing soap opera to a blue-collar James Bond knockoff had worn off by then, and the obsessive commitment to one-upmanship that drives the series was getting tedious. Somehow, though, it’s back on track for The Fate of the Furious, the eighth outing.

It’s still insane, of course. One scene has dozens of cars raining from the sky, and another sees Dwayne Johnson redirect an incoming torpedo with his bare hand. But while Furious 7 was a little too furious—all that noise and chaos is numbing when it never lets up—Fate benefits from a less manic pace that gives the cast some breathing room. It’s just the right amount of furious.

It’s clear from the opening scene that director F. Gary Gray is keenly attuned to the essential elements of a Fast and Furious movie. By the time Fate hits the 10-minute mark, Dom Toretto (Vin Diesel) has rhapsodized about the importance of family, turned an ancient beater into a street-racing monster, and driven said beater, backwards and on fire, through the streets of Havana to earn the respect of a fellow gearhead. (I know, reader; men are weird.) It’s equal parts ridiculous and thrilling, and it’s fun to see the series return to its comparatively modest roots, if only for a few minutes.

In the unlikely event that you care about the plot, it involves a supervillain known as Cipher (Charlize Theron) who wants Dom to help her steal some nuclear warheads so she can take over the world or something. He refuses, of course, until she shows him something on a cellphone that convinces him to turn on his team and do her bidding. This puts Dom in the crosshairs of black-ops spook Mr. Nobody (Kurt Russell), who coordinates the globetrotting effort to track him down.

It doesn’t have to make sense; it just has to string together the elaborate action sequences and make room for the franchise’s ever-expanding cast, which is both its best asset and its biggest challenge. Some of the problems that plagued the last installment are still present here, but separating Dom from the rest of the team, especially for the first film without late co-star Paul Walker, pays off.

What really matters, of course, is whether Fate delivers the goods in the action department, and the answer is an enthusiastic yes. Gray, who honed his car-chase chops with the 2003 The Italian Job remake, turns in some of the most effective and visually inventive set pieces of the series. The film is about a half-hour too long—you have to go back to 2009 to find a Fast and Furious movie that clocks in at under two hours—and all that destruction devolves into tedium by the time it gets to the final showdown at a Russian submarine base, but Gray sustains the energy for a remarkably long time.

I’m still not convinced the wheels won’t fly off before the 10th installment (supposedly) closes out the series in 2021, but for an action series that’s eight movies deep and 16 years old, Fast and Furious still seems to be a pretty efficient machine.