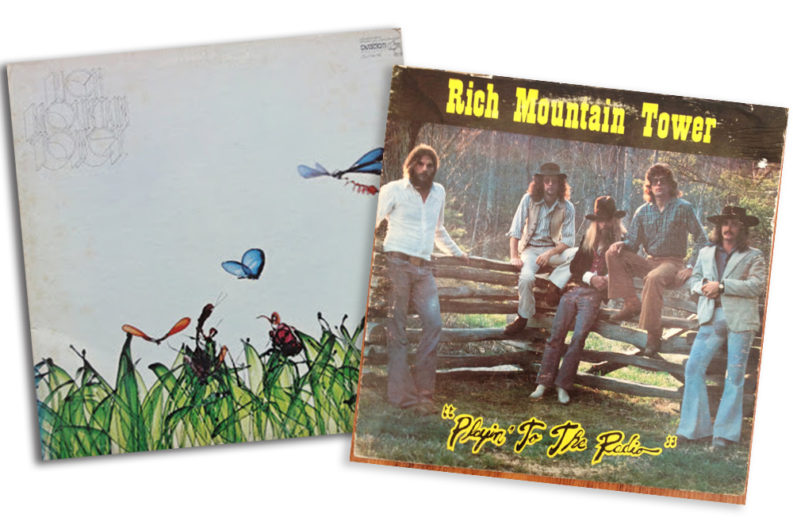 I’m constantly surprised where Knoxville musicians turn up on the Internet. Looking for a copy of the 1969 album by Freddy Fender’s acid-rock group Satan and Deciples [sic] on the underground music website Forced Exposure, I noticed the Aurora label had also reissued Rich Mountain Tower’s debut album on CD. Forced Exposure describes the album as “well ahead of its time.”

Named for a ranger lookout in Cades Cove, Knoxville country-rock act Rich Mountain Tower found some national success in the 1970s. With David Carr on lead guitar, William “Sandy” Garrett on bass and vocals, Doug Moisson on lead and pedal steel guitar, Dana Paul on 12-string acoustic guitar and vocals, and Bob Tucillo on drums, the band gained popularity playing in Knoxville clubs like Bradley’s Station, the Place, the Longbranch, and Yosamite [sic] Sam’s before getting their break following a show in Nashville.

“We were playing this tiny club in the middle of nowhere,” Paul says, speaking on the phone from his home in the mountains of North Carolina. “Joe Melson, who co-wrote some of Roy Orbison’s biggest hits, saw us and loved us. He introduced us to Don Tweedy, who had some industry sway after producing Bobby Goldsboro’s 1968 hit ‘Honey.’”

Tweedy helped the band sign with Ovation Records and booked studio time. Members of Area Code 215, Nashville’s hotshot session players—including multi-instrumentalist Charlie McCoy and steel guitarist Weldon Myrick—were enlisted to help the band record its self-titled debut in 1971 with the brand-new Quadrophonic recording process; unfortunately, not many people had the expensive Quadrophonic stereo equipment, so the full sonic experience was largely lost on those who bought the album.

Even listening to the record on Spotify with computer speakers, you can tell it was well engineered. It’s a mostly mellow country-rock affair, awash in acoustic guitars and harmonies reminiscent of CSN&Y and the Grateful Dead circa Workingman’s Dead.

While mixing the record in Chicago, the band was asked by Ovation to begin work on their second album, Can’t you Feel It? Unfortunately, the label shelved the record, and the band wouldn’t record again until 1975. They continued to play around Knoxville and tour, opening for such acts as Steppenwolf, the Rascals, the Eagles, Steve Miller, the James Gang, Earl Scruggs, and the Four Seasons.

They also found some success gigging in Canada, especially in Montreal. Their third album, Playin’ to the Radio, was recorded there, with Jesse Winchester producing. Winchester was introduced to the band by their friends in Knoxville’s Amazing Rhythm Aces, who were serving as Winchester’s backup band at the time. The record was financed by John Fitzpatrick, scion of a pencil manufacturing family from Lewisberg, Tenn. It was released by the band on their own Beaux Geste label. Curiously, soon after it came out, Ovation decided to finally issue Can’t You Feel It?

“We didn’t even know it had come out—they didn’t tell us,” Paul says. “David went to talk to them about royalties from the first album and came back with some copies. I had even left the band by that point. I suspect they did it as a tax write-off.”

Though a few tracks sound like outtakes from their mellow country-rock debut, most of Playin’ to the Radio displays a band that has absorbed soul and funk influences, with room for extended guitar solos. The production isn’t as fussed over as the Quadrophonic Nashville sessions, resulting in a sound not unlike Tom Dowd’s work on Derek and the Dominos’ Layla. It’s the band’s loosest and most rocking effort, but there weren’t many copies pressed. It’s the most difficult to find of the band’s records.

Rich Mountain Tower has had something of a second life in the Internet age. A blog devoted to “Southern flavored rock” made all three of the band’s albums available for download, and Paul filled in some band history in the comments section. He was unaware, however, that the debut album had been reissued on CD.

“You’re telling me something I didn’t know,” he says. “They didn’t contact us at all. But I’m just glad our music is reaching people any way it can. I’ll have to contact them and see if I can get a CD.”

Inside the Vault searches the Knox County Public Library’s Tennessee Archive of Moving Image and Sound for nuggets of lost Knoxville music and film history.