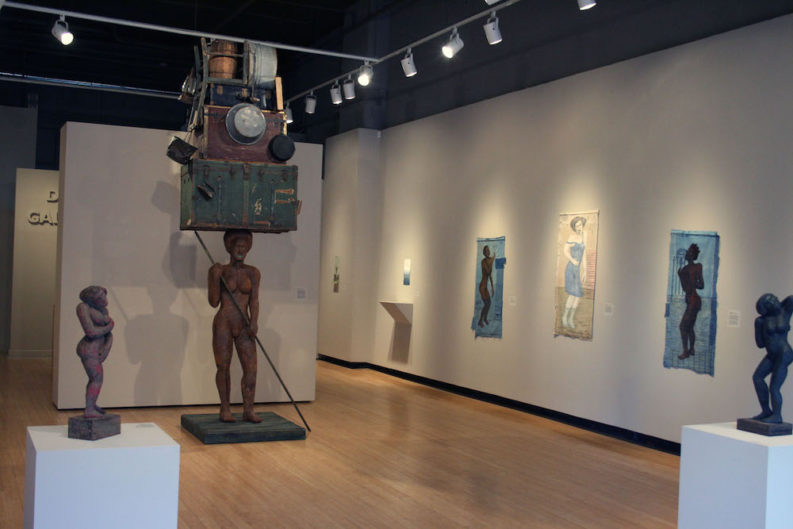 The most horrific flood in recorded American history was the Great Mississippi Flood of 1927. What happened in the official response to the flood and how it impacted people in its path is the basis for Alison Saar’s Breach, currently on display at the University of Tennessee’s Downtown Gallery. Saar, a California artist, had been researching the event when she visited New Orleans eight years after Hurricane Katrina. She was shocked at how little recovery was evident in the Ninth Ward, the poorest section of the city, with the lowest elevations. The correlation between the two historic events, almost a century apart, was disturbing.

The massive flooding in 1927 impacted 27,000 square miles, up to 30 feet deep at its epicenter. The initial levee breach, in Mound Landing, Miss., had twice the velocity of Niagara Falls. Of 630,000 people affected by the flood, 200,000 were African Americans, most of them sharecroppers. The flood magnified the already unjust sharecropping system to beyond criminal.

Displaced people were brought to “relief “camps, where they stayed until the flood dissipated four months later. At first, local planters and even Boy Scouts with guns kept the camps intact. The African Americans were forced to rebuild the levees with no pay. Those that bypassed the camps became part of the First Great Migration North, which would eventually bring the African-American population of the South from over 90 percent to only 55 percent. When Herbert Hoover became president in 1929, he made promises to rectify the injustice caused by the flood and the tenant/sharecropper system. He reneged on all promises, triggering massive voting demographic changes. The black vote, almost solidly for the Party of Lincoln at the time, changed to Democrat by the next election.

When you enter the Downtown Gallery and view Breach, it is possible to envision what the gallery would look like filled with water. Saar’s unframed figurative drawings, all containing a continuous water horizon line, hang on opposing walls. Three figurative sculptures in the center floor area could each be making its way through the same imaginary floodplain.

The largest sculpture, “Breach,” is a commanding life-size nude wood sculpture covered with a surface of vintage patterned tin ceiling tile. She holds a long wooden staff to guide the raft she stands on and carries her worldly goods—a massive stacked pile of steamer trunks, pans, books, and a chair—balanced on her head. The patterns of the ceiling tile are reminiscent of traditional scarification patterns practiced by many West African tribes whose members were kidnapped and sold into slavery. Saar created her as a natural-disaster survivor Mami Wata water spirit, more powerful and protective than dangerous.

The two smaller sculptures and a series of four drawings speak of the culturally significant music and dance that emerged from the flood. “Siltdown Shimmy” and “Black Bottom Stomp,” both named for emergent dances, had river silt embedded into their tin tile surface. Bessie Smith’s “Black Water Blues,” from 1926, describes the Cumberland River flood that seemed to predict the monster to come. Most iconic down through the generations was Memphis Minnie and Kansas Joe McCoy’s “When the Levee Breaks.” A low musical soundtrack of these songs lent atmosphere on First Friday.

Saar’s unframed drawings are rendered with charcoal, watercolor, and indigo dye on vintage cloth sugar sacks with the original patchwork remaining. The figures inhabit the fabric with a kind of organic tactile patina. They don’t struggle under the stacked possessions on their heads, but seem to glide effortlessly through the transparently stained water. Two of the drawings are stretched over the bottoms of steamer-trunk drawers. “Silted Brow” portrays Saar’s only casualty of the devastation, the subject figure lying beneath the water with her head at an unnatural angle.

The painted figures dance in a trance state through the floodwater on strips of mattress ticking and canvas. Their eyes, left blank, seem to defy outside intrusion. “Backwater Boogie,” “Sluefoot Slide,” “Swampside Shag,” and “Muddy Water Mambo” need no further explanation.

An intriguing extension of the Breach installation is found at the rear of the gallery. A collaboration project with poet Samiya Bashir, “Haydes D.W.P. ll (Department of Water and Power)” is an indictment of the failure of Flint, Mich., to provide safe drinking water to its citizens, filtered through Greek mythology. Five jars of alarmingly colored “drinking” water sit on a shelf, each with an accompanying drinking ladle. Each jar is named after one of the five rivers of death: Acheron, the river of pain; Phlegethon, the river of fire; Lethe, the river of forgetfulness; Styx, the river of hatred; and Cocytus, the river of wailing. Bashir’s sharp and minimal prose, delicately transferred onto sheer fabric, beats out insistent phrases that call for awareness.

We are living in a world where recurring injustices can never be excused. Thousands of years of art and literature have repeatedly illuminated humanity’s failings. As a contemporary participant in this chain of communication, Alison Saar’s eloquent work quietly asks for attention and justice, once again.

Alison Saar’s Breach is on display at the University of Tennessee’s Downtown Gallery through April 29. Admission is free.