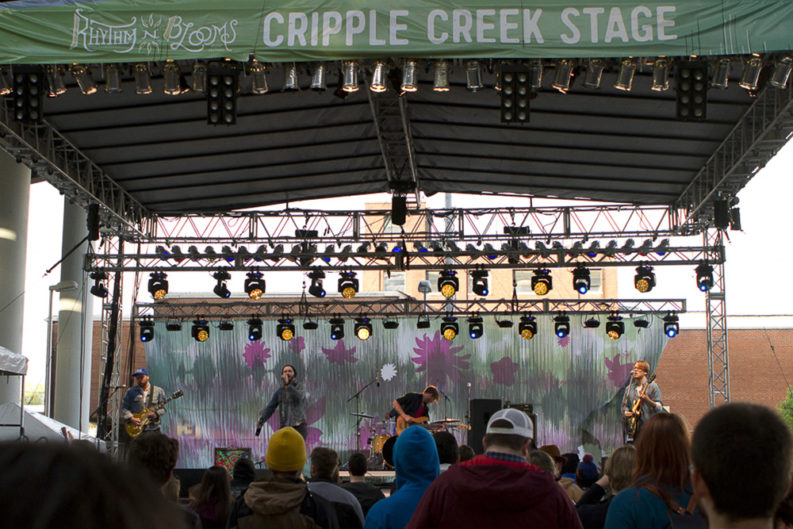 Squeezed under an overpass, next to a noisy set of train tracks, Rhythm N’ Blooms’ central location in an Old City parking lot probably shouldn’t work, but it does. The festival’s main stage, Cripple Creek, is stationed on the corner of Jackson and Patton, surrounded by food trucks, pop-up bars, and a VIP area blanketed by strands of bistro lights. It’s all got a homey, Pinterest-chic feel that syncs up nicely with the abundance of singer-songwriters on the lineup.

This is my first year attending the festival, and I was struck by how well the Old City handles the influx of events. Beyond Cripple Creek, participating venues include Jackson Terminal, Pilot Light, Boyd’s Jig and Reel, the Lonesome Dove courtyard, and Pretentious Beer Company. All of the spaces do a good job accommodating the increase in patrons, with the only hiccups arising once Friday night’s bar crowds started spilling over into spaces meant for festival events. Regardless, it was nice to have everything located within a few walkable blocks.

I started the day one by catching Nikki Lane on the Cripple Creek stage. Lane’s voice has a defiant swagger on her records, but live it’s a force. Pummeling over the sounds of passing trains and the low roar of audience members grabbing beers at nearby vendors, Lane’s belted twang echoed Loretta Lynn as the East Nashville singer-songwriter skipped between songs about Vegas conquests and broken hearts. Midway through her set, Lane welcomed her mom onto the stage to share the mic during a duet. Her mom hopped back up to close out the show with a cover of Bob Dylan and the Band’s “You Ain’t Goin’ Nowhere.”

Next, it was onto the Pilot Light for locals Shimmy and the Burns. Led by  Brian “Shimmy” Paddock, the band has a straight-up roots rock sound; Paddock’s gruff voice injects plenty of soul. The band gradually filled up the room, with attendees pushing toward the front of the stage to groove along to tracks off the band’s recent record, Letting Go.

Down the street, Zoë Nutt packed out Jig and Reel, with patrons squeezing into the room adjacent to the stage to listen in even without a view. I’d heard from several folks over the course of the day to make sure and check out Nutt’s set. A graduate of Belmont University’s songwriting school in Nashville, Nutt’s laid-back style of storytelling was easy to get sucked into.

I closed out the night with back-to-back shows at Barley’s. The first was from Nashville Americana act Wild Ponies, whose frontwoman and upright bassist Telisha Williams was enthusiastically celebrating her 40th birthday.

The second, Birds of Chicago, was my favorite show of the day. A soulful combination of gospel, country, and glimmers of pop, the group, led by husband and wife J.T. Nero and Allison Russell, radiated passion as they glided through more than an hour of grooveable tracks. The sensuality of the show was striking, with Russell’s smooth, powerful vocals adding an unexpected contrast to Nero’s scratchy harmonies. I’m looking forward to catching the band again on Saturday.

Day two is packed with plenty of local acts, with Gogol Bordello’s pan-cultural punk rock promising to bring the theatrics at night.