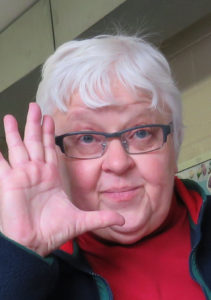 On March 28, the Gannett Company laid off 31 employees across Tennessee. Nineteen of the layoffs were from newspapers in Memphis, Nashville, Murfreesboro; 12 were in Knoxville—11 from the News Sentinel’s newsroom plus the editor of the Shopper News, a community newspaper with seven zoned editions in Knox County and one in Union County.

So for the first time since 1971, Sandra Clark doesn’t have a deadline to meet. But that doesn’t mean she’s not working. When she announced her termination on Facebook the next day, she made it clear that she has no intention of retiring:

“I was one of 12 people laid off yesterday by Gannett. Bummer. I’ve committed to walking around the block every morning and posting something for public consumption.

Her announcement generated 240 responses and 193 comments. No one who knows Clark is surprised by her reaction.

She sold her newspaper to E.W. Scripps in 2005 and was retained as editor. The Milwaukee Journal Sentinel bought Scripps in 2014 and formed the Journal Media Group, which it sold to Gannett in 2015.

Gannett will publish the Shopper News without her, although its readers probably wonder how that’s going to work, because the fiercely independent weekly was dominated by Clark’s style and personality, even after she was no longer the owner.

I know how they feel, because I worked for her, off and on, for 33 years, and keep having to go back and to put all those verbs into past tense. It’s hard to write this at all, truth to be told, because in addition to being my now-former employer, she is my friend—and she isn’t too crazy about my writing this, so there won’t be a lot of quotes from her in this column.

Clark has a lot of friends and she has touched hundreds, maybe thousands, of lives over the last four decades, although her attention was not always appreciated, particularly by public figures whose performance she did not admire.

Longtime county employee Dwight Van de Vate is Knox County’s director of Engineering and Public Works and has worked for bosses of whom Clark approved (former Sheriff Tim Hutchison and present mayor Tim Burchett) and one she didn’t (former Mayor Mike Ragsdale). He says he’s stunned that Clark is no longer editor of the Shopper News.

“She’s been a towering influence on public life in Knox County, and she’s really the heart and soul of the Shopper. I’ve been on both sides of the coin with Sandra—unabated criticism on one side and rock solid support on the other. I have a strong preference for rock solid support.”

A lifelong Republican, Clark has been involved in politics her entire adult life, and probably even before that. Impatient to get on with it, she dropped out of Halls High School at the end of her junior year and applied for admission to the University of Tennessee, writing “Pending” on the line that asked for a high school diploma. Oddly, it worked, and she moved away from the family home in Pedigo and got an apartment in what is now Fourth and Gill, long before it became trendy. She went to work at Standard Knitting Mills, and then moved on to a job at Levi Strauss while taking political science classes at UT.

But her real goal was to work at the Knoxville Journal, and she started applying there every time the management changed. Eventually her persistence paid off, but her tenure there was short-lived because her editor nixed her request to be assigned to Nashville to cover state government.

Her response to this roadblock was to run for the state Legislature. She’d built some name recognition by getting elected as a delegate to the state Constitutional Convention of 1970 (where she made a point of removing gender-specific references to men from the document).

She beat a well-known (male) opponent in the Republican primary and two years later beat another well-known (male) opponent in the general election. It was a brutal race, highlighted by a bunch of well-known Democrats—led by House Speaker Ned McWherter and House Majority Leader Tommy Burnett—who came to Halls to campaign for her opponent. Clark, who was about 24 years old, showed up at their rally, climbed up onto their flatbed truck, and welcomed them to Halls. She didn’t run again, and unleashed her energy on the Halls Shopper, which she had purchased during her tenure as a state representative.

When she took on the Shopper, it was an eight-page advertiser with a front page of news that the owners typed up on a manual typewriter. Clark’s aim was to grow it into a weekly newspaper that covered local news events, particularly those involving education. Over the years, Clark mentored scores of students, started an internship program, and even ran an after-school program at an inner-city elementary school.

She campaign-managed her business partner, Mary Lou Horner, into a career on County Commission and became a player in local politics. She took a particular interest in school board elections and strongly supported teachers. She has encouraged women to run for office, and is known for her sometimes-brutal candor.

“Two things about her stand out in my mind,” says Van de Vate.

“The time she wrote that another county official and I had done such a bad job that we should give the county back our paychecks for the week, and the column she wrote about a falling-out with another weekly newspaper publisher.

“She said she told him to go to hell, and he said something to the effect of, ‘I might, but if I do, I’ll be standing on your shoulders.’ She wrote it just like it happened. It was a turn of a phrase and a moment of candor that stand out in my mind.

“This is somebody who is possessed of stone cold courage and is absolutely unafraid of swimming against the tide. I submit to you that if Sandra Clark had $5 million in the bank, she’d still be doing what she’s doing right now. She’d go forward with this new endeavor and tell the stories that need to be told.” 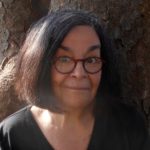 Betty Bean is a longtime local journalist, reporting over the years for the Knoxville Journal, Metro Pulse, and the Shopper News.