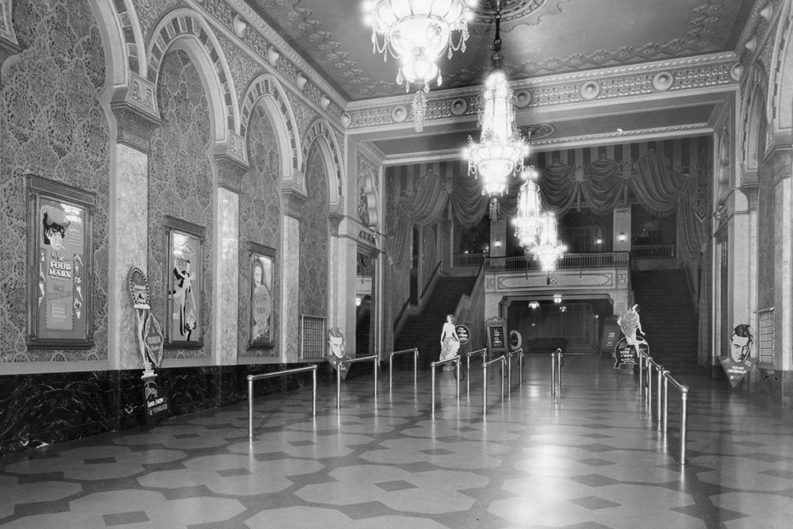 Friday, the 7th, at 5 p.m., Knox Heritage will host a rare opportunity to visit the ca. 1931 Kern’s Bakery building on Chapman Highway. The tour is free to KH members, and it’s not too late to join. Preservationist developer David Dewhirst will be on hand to talk about his plans for the building. See knoxheritage.org.

It ’s the American Inst itute of Architects’ annual Architecture Week, celebrated locally with multiple events. Saturday at 9:00 is AIA’s annual architectural walking tour, led by Jack Neely, of the Knoxville History Project. This year, partly reflecting the fact that music festivals like Big Ears are drawing international praise for our music venues, the theme i s downtown’s hi stor ic auditoriums, from the 1909 Bijou and the 1928 Tennessee to the 1961 Civic Coliseum and Auditorium, and several nightclubs in recently rehabbed historic buildings. Tickets are $10. Proceeds go to support the Knoxville History Project, whose priorities include providing this History Page in the Mercury. For reservations and information about Architecture Week, see archweek.aiaetn.org.

As it happens, Saturday is also the 120th anniversary of Knoxville’s worst architectural disaster, the Fire of 1897. The worst fire in Knoxville history, it destroyed most of the east 400 block of Gay Street, including a hotel and several large wholesale houses. At least four people were killed. All the lost buildings were rapidly rebuilt, bigger than before.

Knoxville has a 150-year-old tradition of baseball, and this Saturday afternoon, the 8th, will be a double header for the Tennessee Association of Vintage Base Ball (yes, two words as it was then), with the Brentwood Travelers challenging Knoxville’s Emmett Machinists, and Nashville’s Cumberlanders trying to best Knoxville’s team, the Holstons. They play 1860s rules baseball (no gloves) at the backyard of 1797 Ramsey House. For more, see tennesseevintagebaseball.com.

This weekend is Rhythm N’ Blooms, one of Knoxville’s bigger music festivals, which includes some historical perspective. Jack Neely will lead Sunday afternoon walking tours of the city’s musical history. Tours, starting at the corner of Jackson and Central, are at 2 and 5. Joining is free, but reserve a spot online at rhythmnbloomsfest.com.

That day is, by the way, the 69th anniversary of the premiere of Samuel Barber’s famous vocal composition, “Knoxville: Summer of 1915,” based on a text by James Agee. The Boston Symphony Orchestra, headed by conductor Serge Koussevitzky, had that honor in 1948, with soprano Eleanor Steber singing the text evoking Agee’s childhood on Highland Avenue.

How free is thought at the University of Tennessee, historically? The University of Tennessee will host, on Monday, April 10, a forum on the past, present, and future of intel lectual freedom on campus on Monday, the 10th, at 5:00. Panelists will include Prof. Bruce Wheeler, author and leading authority on Knoxville’s 20th-century history; Prof. Chuck Maland, whose collection of Agee’s often searing film criticism is due out soon; as well as representatives from UT’s departments of art, journalism, religious studies, literature, and law. The event, which will be held at Room 132 auditorium in UT’s School of Law building, will last about 90 minutes, and is free and open to the public.

Wednesday, April 12, former UT president Joe Johnson will speak about his influential predecessor, Andy Holt, president of UT from 1959 to 1970, at the East Tennessee History Center, at noon.

April 15 is Marble History Day at the Museum of East Tennessee History, celebrating the current “Rock of Ages” exhibit about the marble and limestone industry, which runs until May 14. (See next week’s installment for more about Knoxville’s marble history.)

Featured Photo: The grand lobby of the Tennessee Theatre, designed in 1928 with Moorish Revival elements by Chicago architects Graven and Mayger, will be part of this weekend’s AIA architecture tour. At left are movie advertisements from the theater’s first year, including one for the Marx Brothers’ first comedy, The Cocoanuts. Courtesy of the Calvin M. McClung Collection.

Please help the Knoxville History Project maintain this page and support the Knoxville Mercury for another year! See knoxvillehistoryproject.org, or send your tax-deductible donation to KHP at 516 W. Vine Ave., #8, Knoxville, TN 37902.