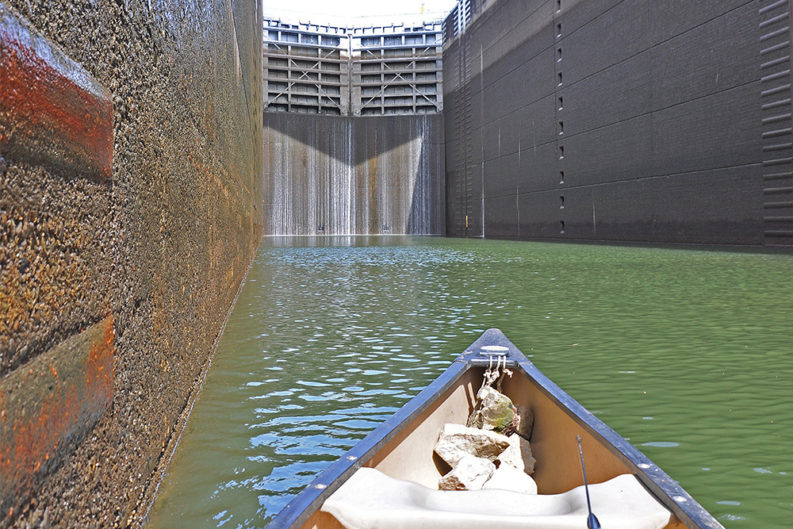 Within a barge length or two of Watts Bar Nuclear Plant across the lake, I launched my canoe for the first time in over a year. Accustomed to riding low out of the wind in a kayak about half the canoe’s weight, I had to reset my paddling tactics when a headwind hooked the bow and flung me downstream, away from my goal: the lock of Watts Bar Dam, about a mile away.

Grizzled fishermen stared from the ramp as I let the boat pinwheel until I could get the bow pointed into the wind and start the constant frantic paddling necessary for making progress against the current and a 20 mph wind.

When I first began to research a canoe trip down the Tennessee River in 1998, people assured me that Jasper, my dog, and I would have no trouble locking through nine dams going downstream, sitting there as if in a series of enormous draining bathtubs. Just don’t lock through going upstream, more than one boater told me. I remember something said about the turbulence created when water is injected into the chamber, raising the level to the “upper” side of the dam, the lake side.

“Why would I ever want to go upstream?” I said to these advisors.

But today I was dusting off the canoe and my canoeing skills, and giving the upstream lock-through a try as a rehearsal for a trip next spring, on the 20th anniversary of my first voyage down the length of the Tennessee, from Knoxville to Paducah, Ky. Starting in mid-March 2018, I will begin a voyage up the Tennessee River, from Paducah to Knoxville. It will be my 60th spring.

On the drive from Maryville, I’d called the Watts Bar lock operator, Scott Padgett, and all he said after I told him I’d like to lock through in a canoe going upstream was, “Just call me when you get a little closer, man.” 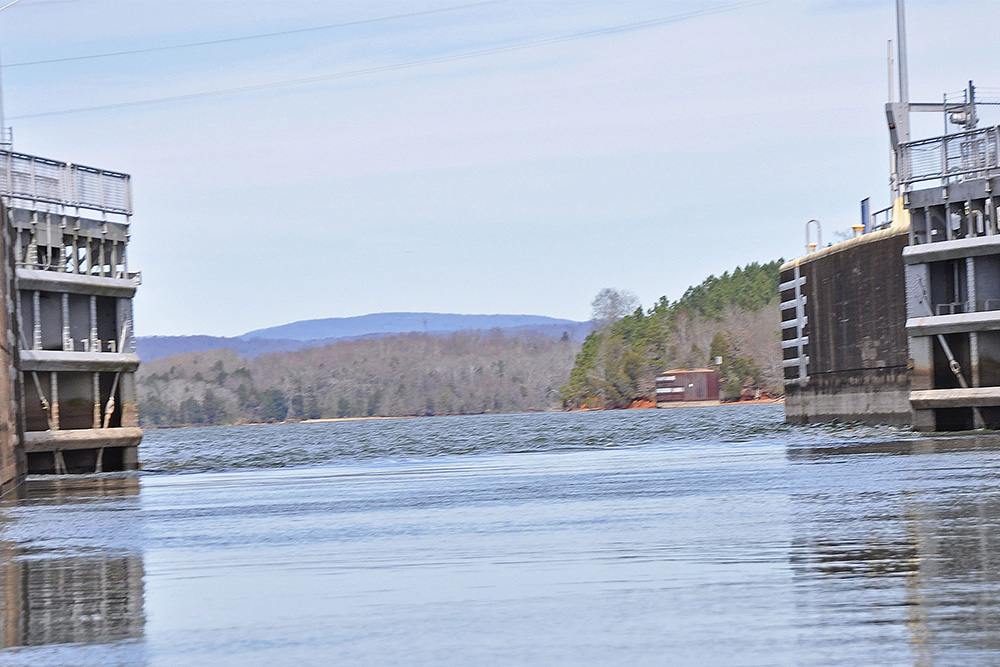 After getting underway at the boat ramp, I couldn’t stop paddling long enough to call Padgett again. If I paused even for a few seconds, the wind would either steer me toward the rip-rap enforced shoreline or push me back toward the boat ramp.

By the time I sought shelter leeward of a rusty mooring cell, 100 yards from the lock’s guide wall, I was huffing like I’d done 45 minutes of suicide drills. On the phone, I identified myself as “the guy in the canoe,” and Padgett said it would take 10 or 15 minutes to lower the water in the lock.

“I’ll turn on the green light,” he said, referring to the stoplight at the top of the dam near the gates, “and then you come in and tie up on the port side.”

This was going way too smoothly, I thought, and this guy sounded so easygoing, so unaffected by what I’d been told was a big deal. Surely it wouldn’t be so easy.

In the meantime, I paddled forward out from behind the mooring cell and chatted with a fisherman who had multiple lines in the water, rods in holders, his hands behind his head leaning back in his padded captain’s chair. His boat looked as battered and well-used as mine.

“Haven’t caught nothing but drum and this catfish,” he said, and held up the cat for me to see—a decent 2-pounder—and to my astonishment, flung it into the water in apparent disgust. His target species were walleye and crappie, he said, but they had not been tempted by his minnows.

I had to ask him twice if he was locking through, and he gave me a quizzical look, as if he hadn’t heard me correctly when I said I was going through to fish the other side. My Little Cleo lure was dangling from the end of my rod, untouched by the tailwaters of Watts Bar Dam.

When the lock doors began to open inward, I paddled through them, awed by the scale of a dam and the engineering feat of holding back so much water, generating power, and allowing smartasses in canoes to pass through routinely, no big deal. This sense of awe always occurs even though I’d previously written with nostalgia and longing about the old river, the one that flowed freely before we decided to dam it up and create a series of lakes.

I wrapped a rope around a yellow bollard, a sort of hitching post for boats that rises or sinks with the water in the dam. I was going up, 57 feet in all, and there was nothing to do, really, but snap photos and hold onto the bollard. Out of the wind, I was able to relax.

It took about 20 minutes to fill the chamber, and I hadn’t felt fearful about the turbulence at any point, though the water did boil and swirl from the discharge, mostly on the starboard side of the lock. 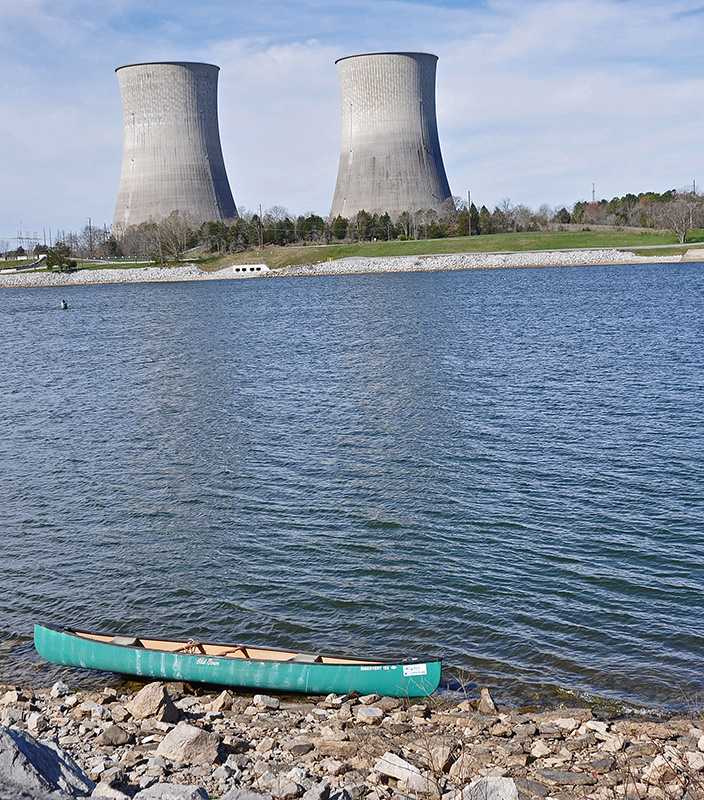 On the way out, I told Padgett, who stood 30 feet above me, why I was locking through: a rehearsal for the longer trip.

“You’ll see a lot of interesting things,” he said. He had no problem locking me through going upstream, he said, but I’d have to check at each dam in order to see if it would be okay. The policy would be “site-specific.”

When I asked him about the turbulence that people had warned me about, he said that he had given me a “slow lift” that took twice as long as a normal filling of the chamber.

He asked me if I wanted to lock back through, going downstream, to paddle back to my car at the boat ramp, but I declined, not wanting to push my luck, wanting to stay in the good graces of the one lock operator I’d met before the big trip.

I left the canoe at the boat ramp below the dam at Meigs County Park and began the 2-mile walk back to my car, thinking that in spite of the March winds, I could do this next year, having solved the mystery of upstream lock passages. Twenty years ago, TVA had tolerated the illegal camping of Jasper and me in this park. I hoped the Corps of Engineers, who ran the locks, would tolerate my upstream odyssey.

It was a good sign, I thought, that a fisherman in a pickup with his son gave me a ride for the last mile back to my car. On the way up the river, next spring, I’d have positive memories of a friendly place as the Watts Bar cooling towers came into view.