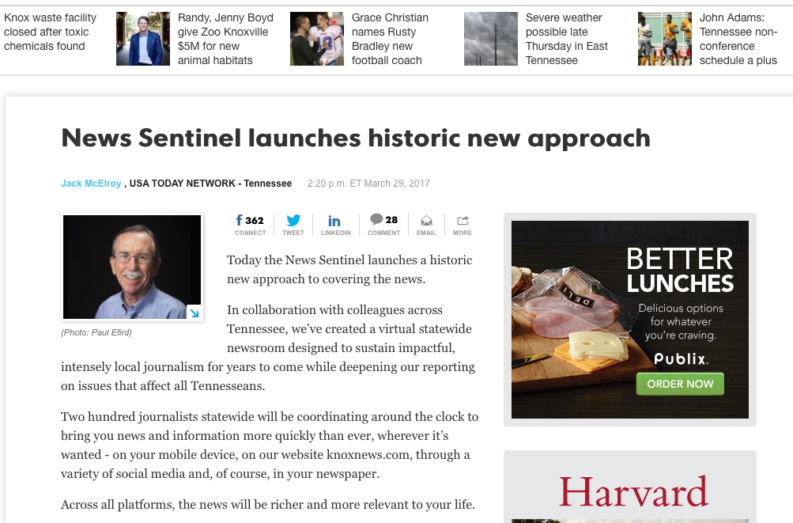 On Wednesday, News Sentinel editor Jack McElroy announced the paper’s “historic new approach to covering the news.” Gannett executives call it a “transformative strategy” that will “re-secure and level-set our economic vitality to support our journalism.”

The first step into this brave new world of journalism? On Tuesday, McElroy and Gannett fired a dozen veteran reporters and editors. That’s a 20 percent reduction of the paper’s editorial staff.

The move wasn’t unexpected. Gannett is known as a particularly ruthless syndicate, even in an industry that’s been cutting jobs for years. And the company had a challenging 2016, with big advertising losses and a failed bid to buy the Chicago Tribune’s parent company. But the scale of Tuesday’s bloodletting still came as a shock. The casualties include some of the Sentinel’s most respected and longest-serving journalists, from Shopper-News founder and publisher Sandra Clark and editorial page editor Scott Barker to reporters Ed Marcum and Gerald Witt.

Despite McElroy’s spin, cutting newsrooms is bad for journalism. It’s bad for the journalists who lose their jobs. It’s bad for newsroom morale. It reduces the incentive for aggressive, risk-taking reporting. It’s bad for readers. This “historic new approach” will critically compromise local news-gathering. As seriously as we take our work here at the Mercury, we’re not equipped or designed to provide the kind of ongoing and breaking coverage expected of a metro daily.

Gannett, which took ownership of the News Sentinel in 2016, also owns The Tennessean, in Nashville, The Commercial Appeal, in Memphis, and daily papers in Clarksville, Jackson, and Murfreesboro. All six are part of what the company is calling the USA Today Network-Tennessee, or, as McElroy describes it, “a virtual statewide newsroom.”

That will likely mean more Nashville and Memphis news in the Knoxville paper. A statewide team of “engagement editors” will oversee op-ed content for the entire network. Nashville and Memphis will cut their coverage of the University of Tennessee’s flagship campus. Some traditional beats will be consolidated across all six papers; others will be stretched to include softer news—or “news [that] will be richer and more relevant to your life.”

McElroy notes that the News Sentinel will move away from hard “institutional coverage”—traditional beats covering government, schools, crime, and courts—in favor of features and trend reporting. “The traditional K-12 education assignment, for example, will be broadened into a ‘children’ beat, so our reporter, Megan Boehnke, will be tackling such diverse topics as obesity, third-grade reading and the effects of video games,” he writes.

And local reporters will be producing stories based not on local perspectives but regional ones. Just as the Knoxville paper will be running more stories about Middle and West Tennessee, the Nashville and Memphis papers will run more stories from East Tennessee.

“Although News Sentinel journalists will focus on local issues, at the same time they’ll provide broader coverage in key areas of statewide interest, such as the Great Smoky Mountains, the University of Tennessee and the Department of Energy facilities in Oak Ridge,” McElroy explains.

The worst prospect of all: rumors have been circulating this week that Gannett will cut the print edition of the News Sentinel from seven days a week to three. Earlier this month, the company announced that two of its daily newspapers in Louisiana and one in Mississippi  will switch to a Monday-Wednesday-Sunday schedule in April.

Tuesday’s bloodletting wasn’t limited to Knoxville; at least 17 staffers were let go from The Commercial Appeal, and four journalists from The Tennessean and The Daily News Journal in Murfreesboro were fired. That all follows a 2 percent reduction in Gannett’s total work force last fall.

There’s just no credible way to present this as an upgrade. Statewide teams don’t produce better local reporting. And there’s nothing new or historic about laying off reporters—it’s the new industry standard.